UNHCR/Ivor Prickett
A man hauls a wooden cart with his family’s belongings to an Iraqi Special Forces outpost in the Gogjali neighbourhood, on the eastern fringes of Mosul, after they fled their home earlier that morning.
18 November 2016

The United Nations refugee agency today stressed the crucial need for sustained funding to support humanitarian operations for the displaced from Mosul, a major Iraqi city where, for the past month, Government forces have been fighting to expel violent extremists.

“There has been a marked increase over the past week in the number of people fleeing after fighting intensified in the more densely-populated urban areas of Mosul,” Adrian Edwards, spokesperson for the Office of the UN High Commissioner for Refugees (UNHCR), told reporters at the regular bi-weekly news briefing in Geneva.

He said that of the 60,000 people who have fled their homes since the start of the military campaign on October 17, about 40,000 have done so since the beginning of November. Close to half are children, according to UN data and UNHCR surveys. Households headed by females, some of whom are survivors of abuse, account for much of the rest.

“The need for sustained funding support as winter approaches, and a redoubling of efforts to reach those displaced by the fighting, many of whom now live in rudimentary conditions in camps, is crucial,” Mr. Edwards emphasized.

UNHCR currently has six camps open, hosting well over 14,000 people and with a capacity for 54,600. Three more are under construction and one is in planning, he said. All told, the 10 camps will have capacity for 17,000 plots. Additional land is required for UNHCR’s total planned 20,000 plots (with six people on average per family tent/plot), in order to provide shelter for 120,000 people in camps.

If needed, UNHCR and its partners, including the Government of Iraq, can potentially host 700,000 people, including a number of shelter solutions outside of camps. But funding for this is crucial, he stressed.

So far, more than 5,705 emergency relief packages have been distributed by UNHCR.

And with winter approaching and temperatures declining, the focus is on protecting people against the weather and keeping them safe and warm. The plan is to reach 1.2 million people in Iraq with special winterized kits including blankets, heating stoves, plastic tarpaulins and water and kerosene jerry cans. UNHCR is also providing cash assistance and plans to winter-proof 53,000 tents.

UNHCR is also bolstering protection monitoring and psychosocial and legal assistance through mobile teams to ensure timely interventions when problems are identified. Among the main concerns are family reunifications, supporting female-headed households, a lack of documentation and supporting victims of abuse.

UNHCR is also supporting an initiative with BBC Media Action and Radio Nawa to initiate a programme to help newly-displaced families access timely information. This week, 2,000 small transistor radios were distributed in UNHCR’s Hasansham camp. Radio Nawa has installed a new transmitter to reach the camp.

UNHCR is also calling again on all parties in the fighting to respect the rights and lives of civilians, and emphasizes the importance of freedom of movement for residents of Mosul.

“Civilians should not be prevented from leaving the city and should have access to safe areas. Equally, civilians must not be forced to return to unsafe areas,” he said. 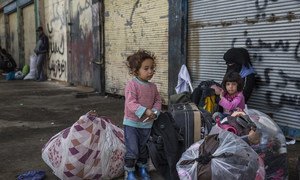 One month into Mosul battle, UN and partners ‘profoundly concerned’ for civilian safety

At the one-month mark of Iraqi military operations to oust terrorists from Mosul, the United Nations and its partners today said tens of thousands of families in newly retaken areas urgently requiring life-saving assistance and warned that the humanitarian community in Iraq faces a “massive scope” of need.