UNICEF/Sebastian Rich
A malaria testing kit on which solid red indicates a negative test result. Malaria is one of the most common causes of death for children under five in South Sudan.
17 November 2016

“The pilot deployment of this first-generation vaccine marks a milestone in the fight against malaria,” stated Dr. Pedro Alonso, Director of the WHO Global Malaria Programme, adding that these pilot projects will provide valuable evidence from real-life settings to make informed decisions on whether to deploy the vaccine on a wide scale.

The vaccine, known as RTS,S, acts globally against the most deadly malaria parasite P. falciparum, very common in Africa. Based on the results from clinical trials, the new vaccine will provide partial protection against malaria in young children.

The vaccine was developed through a partnership between GlaxoSmithKline and the PATH Malaria Vaccine Initiative (MVI), with support from the Bill & Melinda Gates Foundation and from a network of African research centres.

Full funding – $15 million for the malaria vaccine pilots – for the first phase of the programme, has already been received, and an additional commitment of about $37 million from partners is expected to cover the first four years.

Standing water is a potential breeding ground for mosquitoes that carry the malaria parasite. Photo: The Global Fund/John Rae

“WHO recognizes and commends the leadership and support of all funding agencies and partners who have made this achievement possible,” said Dr Jean-Marie Okwo-Bele, Director of the WHO Department of Immunization, Vaccines and Biologicals.

According to WHO, the pilot programme will evaluate the feasibility of delivering the required four doses of RTS,S; the impact of RTS,S on lives saved; and the safety of the vaccine in the context of routine use. In addition, it will assess the protective effect of the vaccine on children aged five to 17 months old.

WHO also stressed that because the new vaccine alone is not an absolute malaria prevention tool, it should complement the existing package of the existing malaria prevention measures and tools, including long-lasting insecticidal bed-nets, spraying inside walls of dwellings with insecticides, preventive treatment for infants and during pregnancy, prompt diagnostic testing, and treatment of confirmed cases with effective anti-malarial medicines.

“These pilots are critical to determine whether this vaccine can be rolled out more broadly, adding an important new tool to the proven interventions we already have in the fight against malaria. The Global Fund's commitment marks the beginning of a historic partnership between Gavi, the Global Fund and UNITAID, bringing together three of the world's biggest health financing institutions to tackle one of the leading killers of children,” stated Dr. Seth Berkley, CEO of Gavi, the Vaccine Alliance. 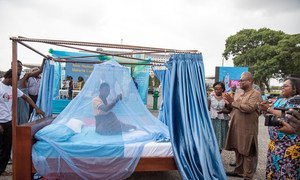 With Africa still accounting for more than 90 per cent of global malaria deaths in 2015, the United Nations health agency’s member States in the region have adopted a new framework on implementing a strategy towards a malaria-free continent.