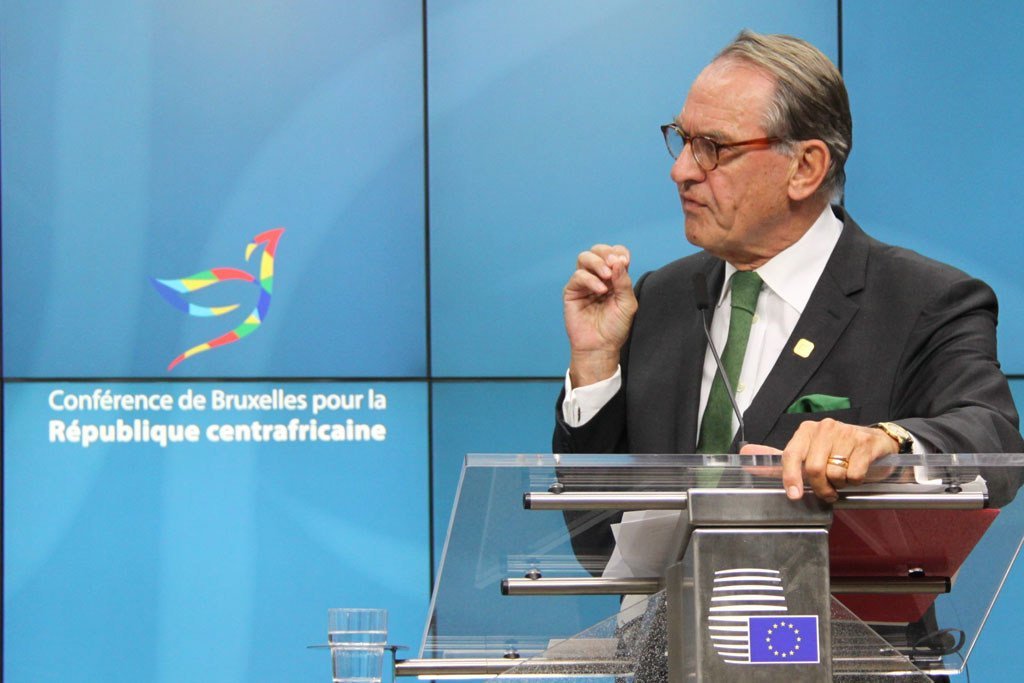 “The Central African Republic is at a crossroads and we need to do all we can to support and unite the forces of good in the country,” Mr. Eliasson said in his remarks to the conference, co-organized in the Belgian capital by the European Union, the Central African Government, the UN and the World Bank. The event aims to secure $1.5 billion in funding to ensure a recovery and peacebuilding in CAR for the next three to five years.

The Conference agreed a Framework of Mutual Accountability for the country.

For his part, Mr. Eliasson stressed that peace and security, recovery, development, stabilization and human rights must go hand in hand, and noted the need for progress on the political front and for dialogue. “But without the rule of law, stabilization efforts will be futile,” he underscored.

Clashes between the mainly Muslim Séléka rebel coalition and anti-Balaka militia, which are mostly Christian, plunged the country into civil conflict in 2013. Despite significant progress and successful elections, the CAR has remained in the grip of instability and sporadic unrest. More than 13,000 UN staff are currently based there as part of the Multidimensional Integrated Stabilization Mission in the country, known as MINUSCA.

“Less than three years ago, the [country] was on the edge of the abyss. We all remember images of the bloodbath, which flooded the media and caused a shock wave around the world,” Mr. Eliasson recalled, noting that the international community reacted by deploying troops from the subregion, the African Union (AU), France, the EU and the United Nations.

Noting his recent visit to the CAR, he said the security situation remains fragile. “Armed groups continue to pose a threat to civilians and destabilize the authority of the State. The troublemakers resort to violence to disrupt the political process and promote their interests. Human rights violations remain endemic and have multiplied with the recent intensification of violence,” he said.

During his trip to CAR, the Deputy Secretary-General noted that the wounds resulting from the conflict are still clearly visible. "The social fabric is torn. Many Central Africans are deeply traumatized and reconciliation, in some cases, will certainly take time,” he said.

’A country with enormous potential’

The Deputy Secretary-General remains optimistic about the future of the CAR, however, believing that the country can turn the page, consolidate peace, achieve true reconciliation and social cohesion and promote development.

“I found a country with enormous potential, a country with a lot of vitality and dynamism,” he told the conference, saying he had been impressed by the substantial human and material resources available in CAR. “Men and women from all walks of life have told me about their desire for peace and their hope for a different future," he said.

Emphasizing that the country's vast natural resources must be exploited for sustainable development, Mr. Eliasson said: “The investment that promotes regional economic integration will help preserve peace.” It would also be necessary to mobilize the Central African Diaspora for rehabilitation initiatives.

Signature of the Mutual Engagement Framework

Stressing the importance of the Framework for Mutual Commitment between the Central African Government and the international community, which was to be signed by the President of the CAR, Faustin-Archange Touadera, Mr. Eliasson said: “This agreement will support the political advancement at the highest level to promote peace and ensure the implementation of the National Plan for Recovery and Peacebuilding.”

“Coordinated and well-planned initiatives, such as those articulated in the National Plan for Recovery and Peacebuilding will be paramount," he continued, noting that “while we are committed to all these fronts, the priority of saving lives must remain essential.”

Mr. Eliasson also stressed that progress on the political front is “more essential than ever, especially as a result of recent violence in the capital, Bangui, and elsewhere in the country. He welcomed the recent adoption by the Central African authorities of key reforms and strategies on demobilization, disarmament and reintegration (DDR), the security sector, police reform and reconciliation.

"Dialogue and continued political commitment will be necessary to carry out the implementation of these national plans," he said, adding that the political and financial support of the international community will also be essential for their success.“At the same time, we must respond to demands and marginalization through continuous and inclusive dialogue and negotiations and the rejection of violence,” said the Deputy Secretary-General. “Armed groups must be disarmed as part of a comprehensive, inclusive and sustained DDR program,” he said, stressing that national defence and security forces must be transformed to be representative, balanced ethnically, effectively and responsibly. “National reconciliation must be facilitated at all levels,” he underscored.

Stressing that “the United Nations will do its part,” Mr. Eliasson announced the immediate availability of $15 million from the UN Peacebuilding Fund to cover relevant peacebuilding needs.

“Our peacekeeping mission, MINUSCA, will continue to firmly counter the actions of troublemakers to prevent violence, ensure security and protect civilians," he warned, stating that the UN will also continue political dialogue with the Government on the main priorities of disarmament, demobilization and reintegration, security sector reform, reconciliation and social cohesion, restoration of state authority and the fight against Impunity.

Addressing the National Assembly of the Central African Republic (CAR) today, United Nations Deputy Secretary-General Jan Eliasson told the legislators that the country’s people had given them a clear mandate, and as such, he urged them not only to play their traditional role as parliamentarians, “but also as defenders of dialogue and reconciliation.”