One month into Mosul battle, UN and partners ‘profoundly concerned’ for civilian safety

UNHCR/Ivor Prickett
In Gogjali, on the eastern fringes of Mosul, a young girl stands by her family's belongings after fleeing the city earlier that morning. They are waiting for the Iraqi military to take them to a camp for internally displaced persons.
17 November 2016

At the one-month mark of Iraqi military operations to oust terrorists from Mosul, the United Nations and its partners today said tens of thousands of families in newly retaken areas urgently requiring life-saving assistance and warned that the humanitarian community in Iraq faces a “massive scope” of need.

Expressing their “profound concern” in a joint statement, UN relief agencies and their partners underscored that these latest developments further exacerbate a humanitarian crisis in a country where 10 million people already were in need of aid. In newly retaken areas, schools, hospitals, and infrastructure – such as water and power plants – are damaged and medical services are often unavailable.

Families are going hungry as a result of loss of livelihoods, disruptions in food production and supply, and higher market prices. Water supplies and agricultural equipment have also been damaged, leading people to drink untreated well water. Children are not vaccinated, nor do they have access to formal education. Many require psychosocial support.

Furthermore, the agencies emphasized that the armed groups controlling Mosul have created both immediate and long term risks for people and the environment thanks to scorched earth tactics and improvised mines.

“Wherever we can, humanitarian partners are helping displaced people and vulnerable families in newly retaken communities,” announced Lise Grande, Humanitarian Coordinator for Iraq, who spoke on behalf of the humanitarian community.

“We are working as quickly as we can and in close coordination with Iraqi authorities to help some of the most at-risk people in the world,” she added.

At the onset of the offensive by Iraqi government forces against ISIL in the city of Mosul, on 17 October 2016, United Nations agencies stepped up their response, marshalling efforts to provide assistance to displaced civilians caught up in the fighting that ensued. One month on, the UN World Food Programme (WFP) has provided food assistance to more than 100,000 people affected by the conflict, with ready-to-eat food and monthly food rations.

Almost 59,000 people have been displaced over the past month, 26,000 of which are children. More than 40,000 are living in formal camps throughout three governorates prepared and managed by the UN, Iraqi Government, and non-governmental organizations (NGOs). More than half of those who have been displaced are women and girls who are survivors of sexual assault and other human rights abuses. Many households are female-headed.

More than 100 humanitarian partners, as well as the United Nations and the Government of Iraq, are assisting those affected by the military operations. Experts are worried, however, that given the imminent operations to reach more densely-populated portions of the city, many families will be unable to reach safety and assistance.

According to the joint statement, a worst case scenario would leave one million people at extreme risk for cross-fire, snipers, and contamination from improvised explosive devices. There is also a risk that civilians will continue to be used as human shields.

The agencies said that 13,000 displaced people are living with host communities or in public facilities. In addition, 69,000 have been given assistance within 48 hours of their displacement, including more than 114,000 who have received food rations, more than 14,300 recipients of emergency health services, more than 66,000 who were provided with emergency household items, and some 124,000 now have access to water, hygiene, and sanitation services.

More than 6,700 women and girls have received reproductive consultations, including life-saving assisted deliveries. 1,400 sessions have been held to support survivors of gender-based violence. Meanwhile, stakeholders are expanding shelter capacities and building new sites.

Donor support to the UN and NGOs has been critical, but more is urgently needed. Winter is approaching and families who fled their homes have virtually nothing to guard against the cold.

“The humanitarian community calls upon all parties in the conflict to take every possible measure to protect the rights and lives of civilians as part of their obligations under international humanitarian law,” the statement concluded. 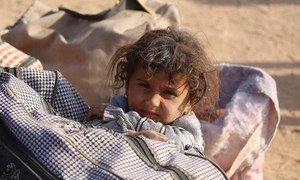 A UNICEF-led multi-agency humanitarian convoy with emergency supplies for 15,000 children was the first to enter the Iraqi city of Mosul, while the International Organization for Migration (IOM) continues tracking displaced population movement and constructing emergency sites.