UN Photo/JC McIlwaine
Director of the Operational Division at the Office for the Coordination of Humanitarian Affairs (OCHA), John Ging, briefs the press on the situation in Sudan, South Sudan and Haiti.
16 November 2016

Returning from recent visits to Haiti, Sudan and South Sudan, a senior United Nations humanitarian official said that while low funding for aid operations around the world challenge prompt and needed relief, the deteriorating humanitarian situation in conflict-riven South Sudan is the most “alarming.”

Speaking first on Haiti, John Ging, Director of the Operational Division at the UN Office for the Coordination of Humanitarian Affairs (OCHA) told journalists at the UN Headquarters in New York that lack of funding has had a major impact on the humanitarian response to Hurricane Matthew that struck the island in early October.

He reported that the humanitarian appeal for the country, amounting to about $120 million targeting some 750,000 people needing urgent support, has thus far received only 40 per cent funding.

According to OCHA, 1.4 million Haitians have been directly affected by the hurricane including some 175,000 internally displaced who have been living in about 307 temporary shelters, including 86 schools.

“Forty per cent [of the funding] means that 60 per cent of the [humanitarian work] is not being done. This means a lot of unnecessary suffering for people who have had their livelihoods and their homes completely wiped out,” highlighted Mr. Ging.

He, however, added that thanks to the prior preparedness, including pre-deployment of humanitarian surge staff, prompt assistance was provided to hundreds of thousands of affected people.

US Marines unloading over 12 tonnes of food items from a World Food Programme (WFP) truck onto helicopters to be sent to Jeremie, Haiti, which was severely hit by Hurricane Matthew. Photo: UN/MINUSTAH/Frederic Fath

UN agencies, including its emergency food relief agency – World Food Programme (WFP) – has provided food assistance to about 520,000 people, and the UN agricultural agency – Food and Agricultural Organization (FAO) – has helped clear agricultural land and provided seeds to ensure that the current planting season is not missed.

On a related topic, the OCHA official told journalists that a cholera vaccination campaign in Haiti was launched on 8 November, targeting some 800,000 people for vaccination.

Turning to the situation in Sudan, Mr. Ging said that 5.8 million people in the country need of some form of humanitarian assistance. Moreover, 3.2 million people are internally displaced (IDPs).

“We have been dealing with this situation for many, many years,” he said, noting that he had visited strife-torn Darfur, where he had met many people that had been recently displaced. As well as hosting more than 2.6 million IDPs, “we have a situation of a protracted crisis for these people who are looking for solutions to their livelihood needs and also for rebuilding their lives.

He said that his mission to the region had been very much focused on the issue of connecting humanitarian actions with development. “We [still] have a lot of humanitarian issues […] we have a lot of challenges in reaching all the people we need access to,” Mr. Ging explained, but, after so many years, people are also expecting the international community to help them with recovery, “and we in the humanitarian community absolutely echo that expectation.”

To that end, he recalled that the World Humanitarian Summit had emphasized the links between humanitarian and development activities, including taking action earlier on development initiatives to help people rebuild their lives. “So the humanitarian appeal will continue to be something that we as humanitarians raise to international attention,” he said, noting that there is a funding gap of $555 million.

“That means this is more evidence of how far we are falling short on the humanitarian side to meet the very basic support that people need in such circumstances,” Mr. Ging said, adding at the same time, that he had seen in Sudan “a lot of opportunities for helping people recover.” As such, OCHA is emphasizing with its development partners to get involved; “it is urgent and it is possible to remove the need for repetitive humanitarian appeals year after year. We should be doing much more in places like Darfur and particularly on the development side.”

As for South Sudan, he said that of the three countries he had visited, the young African nation was the most alarming “in terms of the trajectory that [it] is on.” Indeed: “In every element of the functioning of the country, we are seeing a deterioration; obviously the humanitarian situation, as a consequence of the escalation in fighting,” as well as in the economy and the governance capacity. “It’s an extremely worrying situation.”

Recalling that Adama Dieng, the UN Special Adviser on the Prevention of Genocide, had been in South Sudan at the same time, World Humanitarian Summit, Mr. Ging reiterated that envoy’s warning that the escalation and the “ferocity” of the fighting could mean that the country may be heading towards genocide. “The gravity of the situation that the people of South Sudan face cannot be overstated; and this is of course on top of an already very grave humanitarian situation, both in terms of protection of civilians and also the physical needs of the population.”

He went on to note that there are 6.1 million people in need of humanitarian assistance and 2.9 million that have been displaced since the conflict erupted in December 2013. “We as a humanitarian community are very concerned about a very fast deteriorating food insecurity situation; it has never been as bad as it is now and it is on a trajectory to get much worse, with 3.7 million people estimated to be severely food insecure – one million more than this time last year,” he said, stressing that children were bearing the brunt of the crisis.

While he had been inspired by the dignity and hope the people of South Sudan were showing, he said all should realize that it is a situation and people are suffering immensely. “They are expecting the international community to step up,” he said, explaining that everywhere he went in South Sudan, he had heard “very reasonable and rational demands of more effective engagement by the international community and we have to, all of us, somehow mobilize.”

Mr. Ging acknowledged that the donor community had been generous in funding humanitarian work in South Sudan. He also praised the outstanding work humanitarians are doing “in the most dangerous place to work right now.” He said that the humanitarian appeal was the most fully funded – at 75 per cent. 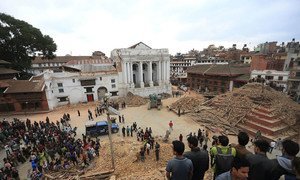