16 November 2016
Community violence reduction (CVR) programmes are not well-known, but are proving to be an effective peacekeeping tool, senior United Nations officials said today during an event to commemorate the tenth anniversary of the launch of CVR in Haiti.

“Since [the first programme’s launch], CVR has proven itself useful in many different contexts, precisely because it is agile and people-centered,” Hervé Ladsous, the Under-Secretary-General for UN Peacekeeping Operations, told a panel discussion at UN Headquarters on ‘Creating Space for Peace.’

He said that an inclusive approach to the reduction of violence is a goal for the entire UN family. Disarmament, demobilization and reintegration (DDR) has assumed a central role in achieving that goal over the past three decades. The endurance of DDR is mostly due to the flexible approaches it has taken to adapt to the changing nature of armed groups.

In one 10 year period, non-State conflict – in Sub-Saharan Africa alone – resulted in 60,000 deaths, Mr. Ladsous said. Still, it does not account for the real cost in terms of socio-economic destruction that is wrought upon the communities in which armed groups are enmeshed.

The report of the High-Level Independent Panel on Peace Operations made it very clear that peacekeeping needs to develop flexible approaches. CVR is one such tool, which does exactly that. “It is a watershed example of peacekeeping learning to adapt and innovate,” he said.

According to a concept note for the anniversary event, the first CVR programme was established in 2006 in an unprecedented move, when the Security Council requested the UN Stabilization Mission in Haiti (MINUSTAH) in resolution 1702 (2006) to “reorient its disarmament, demobilization and reintegration efforts […] towards a comprehensive community violence reduction programme adapted to local conditions, including assistance for initiatives to strengthen local governance and the rule of law and to provide employment opportunities to former gang members, and at-risk youth.”

This was the first time the Council requested a grassroots programme targeting armed gangs operating in urban neighbourhoods. Since then, the CVR approach has gone global, with CVR programming in five other peacekeeping missions in the Central African Republic (CAR), Mali, the Democratic Republic of the Congo (DRC), Sudan and Cote d’Ivoire.

Mr. Ladsous explained that in Haiti, traditional DDR was not working in a context where instability and violence were coming from politically instrumentalized criminal gangs, rather than armed combatants. More than 400,000 Haitian women and men have benefited from the CVR programme.

“If MINUSTAH had not been ready and able to confront the threat of gangs – and I am not exaggerating here – we may have seen the failure of the Mission,” the peacekeeping chief emphasized.

Earlier this year, the UN Multidimensional Integrated Stabilization Mission in the Central African Republic (MINUSCA) anticipated the threat of anti-Balaka and ex-Séléka members who carried the potential for violent action as the country prepared to hold free, fair and safe elections, he explained.

In Mali, CVR activities are designed to be complementary to DDR paving the way for the implementation of the Algiers Peace Agreement. As of 30 June 2016, a total of 44 projects are underway in the north of the country in places such Gao, Kidal, Mopti and Timbuktu where the absence of State authority has made it difficult terrain more than just geographically, he noted.

Ranging from rehabilitation of basic water supply infrastructure to improving the management and rearing of livestock, these projects are providing short term employment to youth-at-risk of recruitment into armed movements, terrorist groups, and groups that cause threats to communities of return for demobilized ex-combatants, he stated.

“CVR is not as well-known as it should be. It needs to be publicized and advertised much more widely,” he stressed.

Dmitry Titov, the UN Assistant Secretary-General for Rule of Law and Security Institutions, said that the success of CVR programmes can be explained in three main ways.

First, CVR directly dismantles armed groups, and is the sole non-military tool to do this. For instance, the CVR component started talking to gang members – and communities – in Port-au-Prince’s most dangerous neighbourhoods at the peak of gang violence in the mid-2000s.

“By listening to their concerns and taking them seriously, by initiating community reconciliation and kick-starting seed projects, we gave these communities hope, opportunities for a fresh start, and positive incentives to work together to bring violence under control,” he explained.

The second main reason is because it is extremely flexible and can be implemented even where there is no peace to keep. CVR practitioners have demonstrated that they are capable of operating in the highest risk locations, navigating highly polarized environments and brokering trust, both among warring parties, but also between these groups and communities, he said.

For example, in CAR, there is no comprehensive peace agreement, or even political strategy to bring in all the hardliners. Yet the CVR programme has managed to open frank communication with the armed groups and engage combatants from both sides in joint projects.

The third reason is because experience and lessons learned have been consolidated into policies, rules and procedures, which provide for increasingly efficient delivery. Recognizing the importance of using assessed budget funds in a flexible and tailored fashion, CVR was investing small sums in a very targeted way, engaging armed groups in constructive activities and opening up areas where other the UN Country Team and other partners had previously not dared to venture.

MINUSTAH has conscientiously fostered the expertise of a project management unit, which has now shared its experience and guidance with many other missions. A host of policy guidance and support on reinsertion means DDR components are well ahead of the curve in terms of managing this funding, said Mr. Titov.

When done well and in conjunction with the UN country team and other actors, DDR and CVR will represent a central pillar of prevention, he noted. Monitoring these programmes’ impact should serve as a barometer to measure peace sustainment.

“This will allow us to analyze two things. First, the degree to which ex-combatants are successfully reintegrated into their communities; and, second, the resilience of individuals and communities to resist slipping back into the cycle of violence,” he said.

UN peacekeeping training to be held for first time in Austria 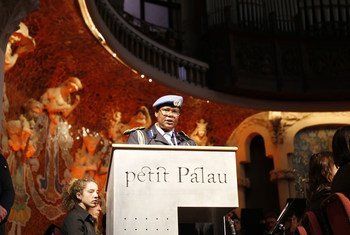