Secretary-General Ban Ki-moon today hosted today a signing ceremony on the margins of the 22nd Conference of the Parties to the United Nations Framework Convention on Climate Change (UNFCCC) (popularly known as COP-22) in Morocco’s capital Marrakech.

Secretary-General Ban Ki-moon today hosted today a signing ceremony on the margins of the 22nd Conference of the Parties to the United Nations Framework Convention on Climate Change (UNFCCC) (popularly known as COP-22) in Morocco’s capital Marrakech.

“I commend President Obiang Nguema Mbasogo [of Equatorial Guinea] and President Bongo Ondimba [of the Gabonese Republic] for demonstrating true political leadership, courage and wisdom in reaching this mutually acceptable agreement, in accordance with the spirit and letter of the United Nations Charter,” Mr. Ban said in his opening remarks at the signing ceremony.

“Today’s event is a testimony to the determination of your countries to move with a common vision to strengthen and respect the international rule of law, and contribute to lasting peace and good neighbourly relations,” he added.

The ceremony marked the successful conclusion of the UN mediation, which started in 2008, and was aimed at finding a mutually acceptable solution of the border dispute between the two countries for submission to the International Court of Justice.

Mr. Ban also thanked the leaders for coming to a mutually acceptable solution as well as for trust in the UN.

Recalling the tireless efforts of the two countries, Secretary-General Ban expressed hope that the peaceful resolution of the dispute will be a source of inspiration for countries around the world facing similar challenges.

“The UN and the international community stand proud of your accomplishment,” he said.

The agreement resolves a longstanding dispute between the two countries regarding the Mbanié, Cocotiers and Congas islands, and common boundaries and which dated back to the early 1970’s.

♦ Receive daily updates directly in your inbox - Subscribe here to a topic.
♦ Download the UN News app for your iOS or Android devices.
gabon|equatorial guinea 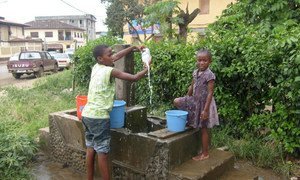 United Nations Secretary-General today welcomed the holding of a trilateral ministerial meeting on the dispute between Equatorial Guinea and the Gabonese Republic.