15 November 2016
The United States is using excessive force against protestors in North Dakota who are trying to stop an oil pipeline project that runs through land sacred to indigenous peoples, according to a United Nations human rights expert.

The North Dakota National Guard, law enforcement officials, and private security firms have used unjustified force in their response to opponents of the Dakota Access pipeline, said Maina Kiai, the UN Special Rapporteur on the rights to freedom of peaceful assembly and association.

Some 400 people who were held in detention during demonstrations have suffered what Mr. Kiai called “inhuman and degrading conditions.” He is concerned over both the scale of arrests and the conditions in which American citizens are being held.

“Marking people with numbers and detaining them in overcrowded cages, on the bare concrete floor, without being provided with medical care, amounts to inhuman and degrading treatment,” he said.

Protestors have reported facing rubber bullets, teargas, mace, compression grenades, and bean-bag rounds while voicing their concerns over the environmental impact of the pipeline and throughout their attempts to protect burial grounds and other sites that are sacred to the Standing Rock Sioux Tribe.

“Tensions have escalated in the past two weeks, with local security forces employing an increasingly militarized response to protests and forcibly moving encampments located near the construction site,” Mr. Kiai said in a news release issued by the Office of the UN High Commissioner for Human Rights.

While he acknowledged that some of the protests had become violent, he emphasized that the response should remain strictly proportionate and should not impact those who protest peacefully.

“The right to freedom of peaceful assembly is an individual right and it cannot be taken away indiscriminately or en masse due to the violent actions of a few,” stated Mr. Kiai, who added that the use of violence by some protestors should not be used as a justification to nullify the peaceful assembly rights of everyone else.

Energy Transfer LLC Corporation, the pipeline operator, said in an announcement on 8 November that the final phase of construction would start in two weeks – thus “wilfully” ignoring an earlier public statement by federal agencies, according to the expert.

“I call on the Pipeline Company to pause all construction activity within 20 miles east and west of Lake Oahe,” declared the Special Rapporteur.

Construction of the pipeline has continued despite the fact that in September, the United Nations Special Rapporteur on the rights of Indigenous Peoples called for its end. The Special Rapporteur, Victoria Tauli-Corpuz, cited serious risks to drinking water and potential destruction of the tribe’s lands. The tribe has been denied access to information and was excluded from consultations during the planning stages.

The 1,172 mile (1,890km) pipeline is designed to carry crude oil to a refinery near Chicago and is being built by the US Army Corps of Engineers and Energy Transfer.

Protestors say that several sacred sites of the Standing Rock Sioux Tribe have already been bulldozed. Construction work is now nearing the Missouri River, home to other sacred sites. Protestors believe that the project will create a major threat to the quality of their drinking water.

Maina Kiai is from Kenya and was appointed Special Rapporteur on the rights to freedom of peaceful assembly and association in May 2011. He is part of the Special Procedures of the UN Human Rights Council, the largest body of independent experts in the UN Human Rights system. The positions are honorary and they are not UN staff, nor do they receive a salary for their work. 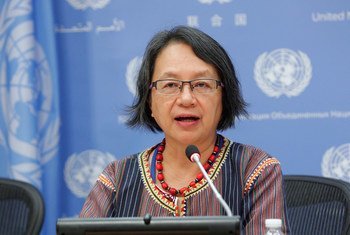 22 September 2016
A United Nations human rights experts today called on the United States to halt the construction of an oil pipeline in the state of North Dakota, citing significant risks to the drinking water of the Standing Rock Sioux Tribe and the potential destruction of their burial grounds and sacred sites.