UNICEF/Kate Holt
The mother of a severely malnourished child watches while a health worker demonstrates how to administer antibiotics to her baby at an emergency food distribution site in Thanyang, Unity State South Sudan.
14 November 2016

With a worldwide call on everyone, everywhere to play their part in maintaining the effectiveness of antibiotics, the United Nations health agency has kicked off a week-long campaign to make antibiotic resistance a globally recognized health issue and to raise awareness of the need to protect antibiotics through appropriate use.

Launched by the UN World Health Organization (WHO), World Antibiotic Awareness Week (14-20 November) aims to increase awareness on global antibiotic resistance as well as to encourage best practices among the general public, health workers and policy-makers to avoid the further emergence and spread of antibiotic resistance.

“Without urgent action, the world is headed for a ‘post-antibiotic era’ in which common infections and minor injuries which have been treatable for decades can once again kill, the benefits of advanced medical treatments such as chemotherapy and major surgery will be lost,” is one of the key messages WHO is transmitting through this campaign.

“Without effective antibiotics, a growing list of infections is becoming harder to treat. This includes pneumonia, tuberculosis, blood poisoning & gonorrhoea.” it warned.

With the theme ‘Antibiotics: Handle with Care,’ the campaign conveys the overarching message that antibiotics are a precious resource and should be preserved. They should be used to treat bacterial infections only when prescribed by a certified human or animal health professional. Antibiotics should never be shared or saved for the future.

WHO is encouraging all countries, health partners and students, and the public to join the campaign and help raise awareness of antibiotic resistance. A variety of resources are available to support local campaigns and a number of additional materials will be made available in the lead up to the week.

Antimicrobial resistance (AMR) threatens the effective prevention and treatment of an ever-increasing range of infections caused by bacteria, parasites, viruses and fungi. Photo: WHO

Why is this message important?

According to WHO, antibiotic resistance has become one of the biggest threats to global health and endangers other major priorities, such as development. It is rising to dangerously high levels in all parts of the world, compromising our ability to treat infectious diseases and undermining many advances in health & medicine.

Following proper use of antibiotics, such as using these only under medical advice and disposing these drugs in safe and proper manner are some of the ways the general public can help in addressing this threat.

Additionally, preventing infections by regularly washing hands, handling food in a safe and clean manner, avoiding close contact with sick people, practising safer sex and keeping vaccinations up to date are also important ways in which a person can maintain good health and avoid illness, WHO said.

Antibiotics also important for the food we eat

With a specific call on people engaged with animal health, production and agriculture, the agency underlined the need to ensure that antibiotics are used under appropriate supervision, such as well-trained veterinarians.

It also called for fostering research on and the use of alternative treatments methods and not solely relying on antibiotics and for raising awareness on the responsible and prudent use of antibiotics in animals and plants, based on international standards.

Quiz: How much do you know about antibiotic resistance?

Furthermore, in September this year, Heads of State met on the side-lines of the 71st General Assembly in New York and committed to a broad, coordinated approach to address the root causes of AMR across multiple sectors, especially human health, animal health and agriculture.

Countries have also reaffirmed their commitment to develop national action plans on AMR, based on the global action plan. 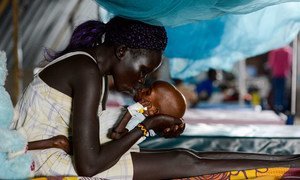 Highlighting “considerable” inequalities among countries when it comes to enabling people with tuberculosis to access cost-effective diagnosis and treatment, a new United Nations health report has called for political commitment and increased funding to prevent, detect and treat the disease if global targets are to be met.