WHO/A. Esiebo
Fifty four year-old Adeniran has type 2 diabetes and receives regular care at a medical centre in Lekki, Lagos, Nigeria. He had his right foot amputated and wears a prosthesis. Type 2 diabetes results from the body’s ineffective use of insulin.
14 November 2016

According to the United Nations, the global rate of diabetes has nearly quadrupled since 1980, with some 422 million adults living with diabetes as of 2014, representing a health risk that the General Assembly seeks to address through World Diabetes Day today, November 14.

In his message on the Day, Secretary-General Ban Ki-moon said: “The disease shortens lives and, if not managed, can cause severe complications such as amputations, strokes or kidney failures. It has devastating impacts on household budgets and national economies.”

This year, the Secretary-General especially focuses on the fact that diabetes is a leading cause of poor eyesight and blindness worldwide.

“Because the changes are painless and gradual, people often only realize they have a problem when their eyesight finally begins to fail. At that point, it can be too late to improve or restore vision.”

Mr. Ban encouraged people with diabetes to have their eyes examined regularly by trained personnel in order to identify problems and receive advice and treatment.

“If people can control blood glucose levels and blood pressure,” he said, “they can reduce the risk of changes in blood vessels. And even when changes do occur, it is possible to slow down the process with timely treatment.”

The rate of diabetes increases each year, mostly as a result of aging populations and a rise in obesity, and is most prevalent in low and middle-income countries

“On this international day,” he said, “let us focus both on prevention and strengthening health services so that everyone who has this debilitating disease can receive the support he or she needs.”

Diabetes is a chronic disease, which occurs when the pancreas does not produce enough insulin, or when the body cannot effectively use the insulin it produces. This leads to an increased concentration of glucose in the blood (hyperglycaemia). 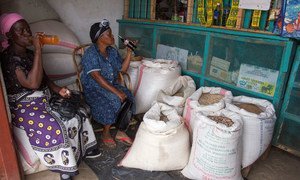