Members of the United Nations Security Council speaks to the press after meeting with President Joseph Kabila in Kinshasa, the Democratic Republic of the Congo, on 12 November 2016. Photo/Ph. Joh Bompengo of Radio Okapi
13 November 2016

Visiting the Democratic Republic of the Congo (DRC), members of the United Nations Security Council called on Congolese political and social actors to take greater responsibility to adopt a consensual and inclusive electoral calendar and asked that the ban on public demonstrations be lifted.

The delegation has so far met with various political figures, including President Joseph Kabila and opposition leaders, as well as representatives of non-governmental organizations.

President Kabila's term ends on 19 December this year. A presidential vote, originally scheduled for 27 November, continues to be a deeply divisive issue in the DRC.

Last month, the Constitutional Court granted a petition of the National Electoral Commission (CENI) to postpone the elections to 2018. Meanwhile, on 18 October, participants in the national dialogue on elections signed an agreement to hold the elections in April 2018. However, the dialogue is being boycotted by several of the main opposition groups, which have formed a coalition called "Rassemblement." The group has been staging popular protests on the 19th every month to pressure President Kabila to step down.

In Kinshasa, Mr. Delattre, said that the delegation highlighted the need for “a broad inclusive framework in order to reach a broad consensus on a specific electoral timetable, accompanied by confidence-building measures.”

“In this context I would like to stress that we emphasized how freedom of opinion and assembly must be guaranteed, and fair access to the media ensured in order to have a free and constructive political debate,” he said.

He said UN Security Council members called on the Congolese authorities to re-establish Radio France International's signal and to lift the ban on demonstrations.

Earlier this month, Mr. Delattre told the press that the Council's visit to DRC “will be a very important exercise of preventive diplomacy.”

“We want to seize this opportunity to talk to all Congolese stakeholders to ensure that they fully realize the responsibility that they have in preserving peace in their country and show the necessary spirit of compromise and openness in order to prepare for the elections as soon as possible and, this is a key word, in full respect of the constitution,” he said.

The Council delegation will visit Beni on Sunday before traveling to Luanda in Angola. 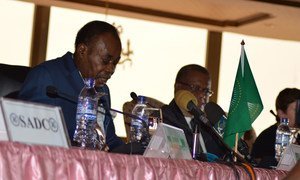 Taking note of the wrap-up of the African-Union mediated national dialogue in the Democratic Republic of the Congo (DRC), United Nations Secretary-General Ban Ki-moon today urged the Government to remain actively engage with all political stakeholders, and called on political actors not involved in the talks to resolve their difference peacefully.