Briefing the Security Council today, police chiefs from United Nations missions highlighted the work of their respective units and informed the Council members of the challenges their officers face the ground.

Speaking first, Bruce Munyambo, Police Commissioner of the UN Mission in of South Sudan (UNMISS), informed the 15-member Council that despite the efforts of the Mission’s police component to proactively engage with communities, the security situation in the country has been placing “significant” demands on UNPOL.

Recalling the crises in Malakal and Juba, where protection of civilian (PoC) sites and UNMISS premises were either directly attacked or were caught in the crossfire, Commissioner Munyambo underlined the “importance of ensuring that all police officers not only have the relevant skillsets, but also the right mindset to respond quickly and appropriately to a crisis situation.”

“Female officers participate in all activities including patrols, family and child protection, gender-awareness and community-oriented policing. They also act as role models, inspiring Darfuri women and girls to advocate for and defend their rights.”

She further highlighted the importance of gender balance in police forces not only to build confidence in communities but also to encourage victims to report cases and thereby help ensure more access to justice.

He also informed the Council of the recognition of the positive impact of MINUSTAH police on strengthening the capacity of Haitian police forces (PNH).

“It is critical for Haiti’s long-term stability that capacity-building of the PNH remain a priority for the international community until the PNH can provide security for all Haitians,” he said.

♦ Receive daily updates directly in your inbox - Subscribe here to a topic.
♦ Download the UN News app for your iOS or Android devices.
police 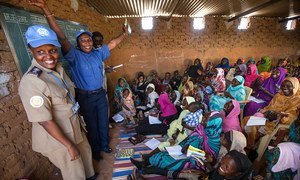 Crisp uniforms and the jingle-jangle of brass filled the corridors. With them, came an extra sense of security that permeated United Nations Headquarters in New York this week. For the eleventh year running, erect posture and striding confidence was the daily modus operandi, as the Heads of United Nations Police Components amassed for UN Police (UNPOL) Week 2016, which runs from 7-11 November.