The International Criminal Court (ICC) will make the situation in Libya a priority in 2017, its prosecutor said today, citing the widespread violence, lawlessness and impunity in the country and the tragic consequences of the conflict borne by civilians.

“My commitment to make Libya a priority situation in 2017 is compelled by a number of factors,” Fatou Bensouda, ICC Prosecutor, told a Security Council debate, noting that those factors include the widespread violence, lawlessness and impunity in the country, a desire to provide justice for victims of Rome Statute crimes, and alleviate the suffering of those civilians, and the opportunities for further investigation.

The situation in Libya was referred to her Office by the 15-member Council. “The referral by definition carries great responsibility to seek justice for the countless civilians who have been victims of the widespread crimes in Libya since 15 February 2011,” she said.

Regarding the case of Saif al-Islam Gaddafi, a former Libyan political figure and a son of late Libyan leader Muammar Gaddafi, she said that media reports suggested that Mr. Gaddafi had been released from detention in Zintan on the basis of a grant of amnesty.

“I must report to you that reliable sources, including the Libyan Prosecutor-General’s office, have confirmed this information to be incorrect,” she said, adding that Mr. Gaddafi is still in Zintan and outside the custody and control of the Presidency Council of the Government of National Accord.

She called on the Libyan authorities to ensure that they do everything possible to have Mr. Gaddafi transferred to the ICC without any further delay.

As for the case of Abdullah Al-Senussi, former Libyan intelligence chief, her Office awaits the full report of the UN Support Mission in Libya (UNSMIL) on the conduct of the domestic trial, and will study it carefully when it is available, she said. At this stage, her Office remains of the view that no new facts have arisen which negate the basis on which the Pre-Trial Chamber found Mr A1-Senussi's case inadmissible before the Court, she added.

She said that the persistent instability and armed conflict prevents her Office from conducting investigations within Libyan territory, in relation to both existing and potential new cases.

However, her Office intends to apply for new warrants of arrest under seal as soon as practicable and hopes to have new arrest warrants served in the near future, she said, noting that her Office’s ongoing efforts to arrest additional suspects have advanced significantly.

“Timely execution of these new arrest warrants will be crucial, will require coordinated efforts by States, and may also require support from the Council,” she said, adding that she has decided to allocate additional resources from within her Office’s overall budget to the Libya situation.

“Without this Council’s support, this allocation will necessarily come at the expense of investigations of other crimes in other situations,” she said.

“I appeal to this Council to recognise the collective responsibility arising out of your referral and to support financial assistance by the United Nations for my Office’s Libya investigations in 2017. The Libyan people deserve no less,” she stressed. 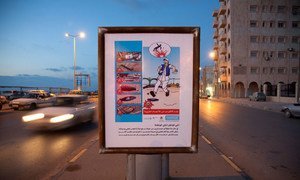 Libya: As situation worsens, UN envoy calls for pause in fighting near Benghazi

Expressing deep concern over the plight of civilians caught in the cross-fight in a Benghazi neighbourhood, a senior United Nations official in Libya has called for a humanitarian pause to allow aid to reach those in urgent need and as well as a safe passage for those who wish to leave.