Alongside liberating the country’s territory from the Islamic State of Iraq and the Levant (ISIL/Da’esh), it is essential that processes are undertaken to “capture the hearts and minds” of all Iraqis from all parts of Iraq for it to be peaceful and united, the United Nations envoy to the country told the Security Council today.

“The rebuilding of infrastructure, restoration of essential services, rule of law, schools and employment are ever more important to restore confidence in the Government,” the Special Representative of the Secretary General for Iraq, Ján Kubiš, told the Council.

“Returns of IDPs [internally displaced people] holds the key to rebuilding Iraq’s solid societal fabric. It is part of the reconciliation and healing,” he added, noting that in general, the pace of returns in the previously liberated despite the Government's and international community’s efforts is rather slow.

Making special mention of the operation against ISIL in Mosul, Mr. Kubiš said that the efforts of the Iraqi Security Forces (ISF), the Peshmerga, the Popular Mobilization Forces and allied tribal and local volunteers are making steady progress in liberating the city, while trying to avoid excessive risks to the civilian populations.

“This liberation operation marks the beginning of the end of the so-called ‘Da’esh caliphate’ in Iraq,” he underscored.

He also called on local leaders to ensure that the grievances of the past are addressed and a way is found to live together “after ISIL in justice and equality for all.”

“Reconciliation at both community and national level is the way to make military victories against ISIL sustainable, to make Iraq truly peaceful and united,” he highlighted. In his briefing, Mr. Kubiš also informed the Council of credible reports of the group forcing tens of thousands of civilians, including women and children to relocate inside the city, effectively using them as human shields, as well as the killing civilians who refuse to comply with their instructions or those who previously belonged to the ISF, including 232 civilians who were reportedly shot dead on 26 October.

He added that as of yesterday, some 35,000 people have been displaced due to the fighting in Mosul, and Iraqi authorities have been providing them transport to emergency sites, where some 20,000 are presently being housed, while many others, he said, have found shelter in host communities.

The UN envoy further reported that humanitarian agencies continue their preparations for mass displacement as well as for the upcoming winter.

Mr. Kubiš, also the head of the UN Assistance Mission in Iraq (UNAMI), noted that the Mission had referred a few sporadic reports, mostly of individuals committing “ad hoc acts of revenge” against captured ISIL fighters to the Iraqi Government for investigation and appropriate action.

“The Government must continue its efforts to prevent such incidents from occurring and to investigate and punish any such incidents should they occur,” he reiterated.

Further in his briefing, the UN official also called on the Governments of Iraq and Turkey to “tone down” their rhetoric and accelerate bilateral efforts to find a mutually acceptable resolution to the presence of Turkish troops.

He also informed the Council of the activities of the UN in Iraq, including UNAMI’s technical advice to Iraq on a number of laws, including one related to prevention of sexual and gender-based as well as the work of UN Development Programme (UNDP) and other UN entities.

Also, speaking on the issue of missing Kuwaiti and third-country nationals, as well as Kuwaiti property, including the National Archives, he said the Government of Iraq was injecting much-needed energy and momentum into bolstering efforts to find missing persons. 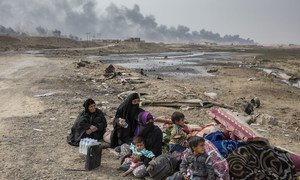