UNICEF/Mohammad Badrul Hassan
Children having a meal at a school in Hakha city, Myanmar.
9 November 2016

Expressing concern for the safety of children in the northern part of Myanmar’s Rakhine state which is in the midst of “security operations,” the United Nations Children’s Fund (UNICEF) has called upon the Government to protect children there from all forms of violence and to support prompt and independent investigations into reports of grave violations against them.

“Worsening inter-communal conflict in Rakhine state […] is taking a terrible toll on children – especially those living in the northern part of the state, where thousands of children have been cut off from humanitarian assistance in recent weeks,” said UNICEF in a statement late yesterday.

“These children already suffer from high levels of deprivation and malnutrition. Their futures depend on help from doctors, nurses, teachers and others who can provide them with nutrition, health and education services,” it added.

Noting that though some relief has been delivered in recent days, UNICEF called for “full resumption” of essential services as well as the urgent lifting of all restrictions of movement of health and other professionals so they can safely reach children and families.

In late October, in her briefing to the Third Committee of the General Assembly – the main GA committee on social, humanitarian affairs and human rights issues, UN Special Rapporteur on human rights in Myanmar Yanghee Lee had voiced concern over the situation in Rakhine state, including the killing of nine police officers (earlier in the month) and the resulting security operations, which she said led to multiple allegations of serious human rights violations, including torture and ill-treatment during interrogations, summary executions, arbitrary arrest and the destruction of mosques and houses in Muslim villages. 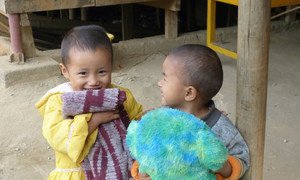 The United Nations Special Rapporteur on human rights in Myanmar, Yanghee Lee, called upon the international community today to not forget about ongoing human rights challenges in the country, including continued detention of political prisoners, the constitutional guarantee of 25 per cent of seats in Parliament to the military, and increasing unrest and discrimination against Muslim communities.