Briefing the United Nations Security Council, High Representative Valentin Inzko said that though there have been some positive developments in Bosnia and Herzegovina, these have been overshadowed by parties focusing exclusively on the ethnic distribution of the population around the country.

In particular, Mr. Inzko noted the commitment of the Bosnia and Herzegovina’s leadership to reform, but added that certain political actors have continued and even accelerated their actions and rhetoric aimed at the further division of the country, expressing concern at a referendum held in the Republika Srpska (RS), calling it “a serious and direct challenge to the Dayton-Paris Peace Accords and the rule of law.”

“For this reason, I consider the referendum of 25 September to be a grave violation of the Peace Agreement and the rule of law. It was held against decisions of the court, including a direct order suspending the referendum,” he added.

Mr. Inzko recalled that in his reports to the Security Council he compiled a clear pattern of statements and actions to this effect, which have included calls for secession and said that in the current reporting period (16 April to 21 October), the RS President and officials from his party described the September referendum as the first in a series, to possibly include referenda against the State institutions, on the status of the RS, and on independence.

He further added that a recent move by the RS National Assembly and its speaker to decorate a number of war criminals, including Radovan Karadzic, who was sentenced to 40 years of imprisonment for genocide, crimes against humanity and violations of the laws or customs of war by a UN tribunal, exacerbated tensions, deeply offending the survivors of ethnic cleansing and many others.

“This act of officially decorating war criminals and architects of ethnic cleansing in Bosnia and Herzegovina seems intentionally designed to open the wounds and the divisions of the past,” said the High Representative.

Mr. Inzko further informed the Council of recent local elections in the country and noted that though largely peaceful, some irregularities were reported, including a suspension of the vote in the southern town of Stolac and said that the polling there would need to be repeated as soon as possible.

Outlining such challenges, he highlighted that the presence of the European Union (EU) military force, with an executive mandate, is essential to building confidence and strengthening stability.

Moving forward, the High Representative called on the international community to send a strong message to those authorities and leaders in the country who “reject rule of law and seek to reopen the wounds of the past” that they will not lead their constituencies to prosperity or integration with Euroatlantic structures.

“The leaders of Bosnia and Herzegovina – with the help and guidance of the International Community – must recommit to make [it] a peaceful, stable, functional, multi-ethnic country, fully and irreversibly integrated into European structures,” he said. 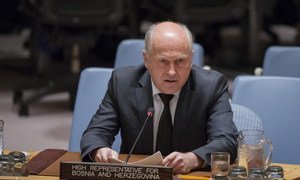 The readiness of some political actors in Bosnia and Herzegovina to question and challenge the 1995 peace accord, including new attempts to undermine the sovereignty and authority of the State and its institutions, continues to cast a shadow over positive efforts to advance economic and social reforms, the United Nations Security Council was told today.