UNHCR/Ivor Prickett
A family displaced by fighting in the village of Shora, 25 kilometres south of Mosul, wait by the roadside at an army checkpoint on the outskirts of Qayyarah.
8 November 2016

The Office of the UN High Commissioner for Human Rights (OHCHR) received reports on 25 October that 50 former Iraqi police officers had been killed in a building outside Mosul city, and “that building was the same agricultural college that has now been cited as the site of those mass graves,” Ravina Shamdasani, a spokesperson for the Office told reporters in Geneva.

“However, OHCHR does not have information about the mass graves,” she added.

Ms. Shamdasani said the UN continues to receive information about civilians being forcibly moved by the ISIL, as well as abductions and killings of civilians.

In response to a question, she said that as of 4 November, ISIL had forcibly moved about 1,500 families from Hammam al-Alil towards Mosul airport. OHCHR also has information about dead bodies found, but that has not yet been sufficiently verified.

The spokesperson also said OHCHR has information that between 1 and 4 November, 195 former Iraqi Security Forces (ISF) members had been reportedly abducted by ISIL in several villages in Tal Afar, and on 3 November, another 100 former ISF officers had been abducted from Mawali village about 20 kilometres west of Mosul. The fate of these 295 civilians is unknown.

On 2 or 3 of November, ISIL allegedly abducted at least 30 sheiks in the Qayrawan sub-district of Sinjar district, who were taken to an unknown location, she added. One report said that 18 of them were killed in Tal Afar district on 14 November, but the information has not yet been verified.Tarik Jasarevic, a spokesperson for the World Health Organization (WHO), said that he talked this morning with the WHO team in Erbil Hospital, which is delivering medical supplies for more than 90,000 beneficiaries, including trauma kits and surgical supplies for 300 trauma and surgical interventions.

Erbil Hospital is the main referral hospital in the area, about 1 hour from Mosul, where injured people were being brought.

Since the military offensive began on 17 October, they had received 29 trauma injury cases, 10 of them for bullet injuries, four for mortar shell injuries, two for mine injuries; 11 were women and six were children, he said.

In other areas, WHO is trying to provide health care with mobile clinics. In some cases, those mobile clinics are the first responders to arrive on the scene. Five days after Tlol Nasir village, south of Mosul, became accessible, a WHO mobile health clinic was the first health provider to arrive. The main cause of medical consultation continues to be respiratory tract infections due to smoke inhalation, as some 20 oil wells continue to burn.

WHO had also conducted assessment missions to the two nearest referral hospitals to Mosul, closer to Mosul than Erbil, which were Qayyarah Hospital south of Mosul and Hamdaneya Hospital east of Mosul. Those hospitals are not functional right now, but WHO is working with the health authorities to ensure that emergency and reproductive health departments are rehabilitated in the coming days and weeks, to ensure referral care for trauma and complicated deliveries.

In response to a question, Mr. Jasarevic said that WHO has not received any reports on the use of chemical weapons so far. WHO has trained 90 medical staff on mass casualty management and decontamination of patients.

In response to a question about the situation in Mosul and the possible targeting of bridges to prevent the movement of people, Jens Laerke, a spokesperson for the UN Office for the Coordination of Humanitarian Affairs (OCHA), said that the humanitarian community has not yet reached inside Mosul. He said that as a general note, civilian infrastructure must be spared in accordance with international humanitarian law.

Leonard Doyle, a spokesperson for the International Organization for Migration (IOM), said that 34,860 people have been displaced from Mosul and adjacent districts, up from 7 November. Over the past weekend, IOM Director-General William Lacy Swing has been in the area on a two-day visit to the conflict zone, looking in particular at the emergency camps which have been established. 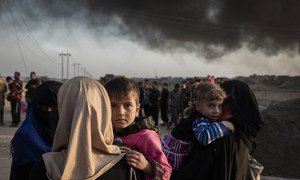 Amid the intensification of the military campaign against the Islamic State of Iraq and the Levant (ISIL/Da'esh) in northern Iraq and its impact on civilians, a senior United Nations humanitarian official in the country has raised alarm their safety and called on all sides to ensure that they are protected.