Amid increased attacks from violent extremist and terrorist groups, the United Nations peace operations must be better prepared to face such asymmetric threats by ensuring the safety and security of UN personnel and adapting to varying situations on the ground, Deputy Secretary-General Jan Eliasson told the Security Council today.

“It is a sad fact that our peacekeepers are now being specifically targeted by violent extremists and terrorists,” Mr. Eliasson said during a day-long open debate, which explored better ways to take into account threats such as armed groups and/or terrorist operations, among other non-State actors, in the planning, concept definition and operational methods of UN peace missions.

According to a concept note released ahead of the debate, 34 peacekeepers were killed and 190 injured between January 2015 and November 2016.

Yesterday again, peacekeepers in Mali came under attack, with one of them killed and seven others wounded, he said.

Recalling that the High-Level Panel on Peace Operations emphasized that “UN troops should not undertake military counter-terrorism operations,” Mr. Eliasson said that a conclusion would be that peacekeeping operations should not be mandated to militarily defeat violent extremist and terrorist groups.

“However, terrorism and violent extremism are a reality in many contemporary conflicts, a reality which has to be dealt with,” he said.

These destructive and dangerous forces make conflicts even more intractable, he said, explaining that they thrive on impunity and governance failures and exploit deep-rooted grievances.In response, UN action and the Organization’s footprint on the ground have to be more nimble and comprehensive, and need more flexible support arrangements, including more sophisticated and predictable uniformed capabilities to strengthen mobility, responsiveness, and a deeper understanding of the operating environment as well as the development of intelligence and analysis capacities.

The UN will also need to adjust how it conducts its core tasks, including ‘good offices,’ capacity-building, community engagement and stabilization measures, he said. Further, the political objectives of UN peacekeeping operations need to be clearly defined and communicated.

The UN must find new and creative ways of achieving political goals in situations where some parties are not speaking partners or willing participants, and must devise strategies to build coalitions of support around political objectives at local, national and regional levels, he added.

First is to ensure the safety and security of its personnel by introducing greater situational awareness, analysis and force protection measures while utilizing new technologies and deploying uniformed units with built-in robust self-protection tools, he said.

Second, he stated, an over-generalized approach can be counter-productive, possibly exposing the UN to more risk. Supporting peaceful resolution to conflict should be grounded in a clear and nuanced understanding of who the different parties are, how they are resourced, and who their allies are. This varies from case to case.

There is also a need to think beyond a security-focused approach, and consider the entirety of the tools at the UN’s disposal, including sanctions regimes, normative instruments, capacity-building, stabilization and development aid.

Third, “we must fully take into account how and when the United Nations can support national and regional efforts to prevent violent extremism and terrorism,” he said.

The Secretary-General’s Plan of Action to Prevent Violent Extremism cites the need to integrate prevention of violent extremism in peace operations, both in terms of mandates, and of relevant activities of UN country teams.

When requested, the United Nations is ready to support the efforts of Member States in implementing the recommendations set out in the Plan. The UN is providing technical assistance in areas such as criminal justice, border controls, kidnapping for ransom, dealing with foreign terrorist fighters, and the financing of terrorism. The UN is also supporting youth engagement and skills development.

Mr. Eliasson also underscored the importance of implementing the 2030 Agenda for Sustainable Development as global challenges are interdependent, while stressing the full potential of the identical resolutions in the General Assembly and the Security Council on peacebuilding and sustaining peace.

These texts focus on a conceptual shift from peacebuilding to sustaining peace as transformative and forward-looking as it means that peacebuilding is no longer confined to post-conflict situations but applies to all phases before, during and after the conflict. 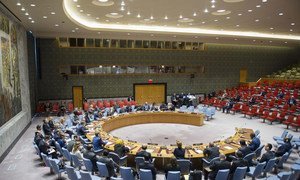