UNICEF/Roger Lemoyne
In Jérémie, Haiti, a girl opens a hygiene kit distributed in a cholera-affected area. Hurricane Matthew passed over Haiti on Tuesday 4 October 2016, with heavy rains and winds.
4 November 2016

As Haiti struggles to recover from the massive destruction wrought by Hurricane Matthew, which pummelled the tiny island one month ago today, the United Nations warned that while its seems as if “the world has moved on,” Haiti’s needs are vast, exemplified by the nearly 600,000 children being stalked by disease, hunger and malnutrition and in need of assistance.

“One month after the hurricane, life for more than half a million children in Haiti is still far from back to normal,” said Marc Vincent, Haiti Representative for the UN Children’s Fund (UNICEF), in a news release. “Too many children are still homeless, hungry, out of school and in danger. We are scaling up our response and are determined to help as many of them as possible as fast as we can.”

Too many children are still homeless, hungry, out of school and in danger

UNICEF said there have been at least 1,000 suspected cholera cases among children in the past month. Out of 219 cholera treatment centres in the country, 18 have been damaged in the worst-hit departments of Grand’Anse and South, further complicating efforts to contain the disease.The total destruction the Category 4 storm inflicted on crops, food stock and livestock in some of the worst affected areas have left over 800,000 people in need of immediate food assistance and more than 112,000 children at risk of acute malnutrition.

An estimated 50,000 children have been left homeless and are staying in temporary shelters. Another 3,500 children living in institutions need help accessing nutrition, water and sanitation services.

At the St. Antoine Hospital in Jérémie, Haiti, two of the three main buildings were devastated by Hurricane Matthew in October 2016. Photo: UNFPA/Eddie Wright

More than 700 schools have been affected and about 86 schools have been used as temporary shelters, causing school disruption for at least 150,000 children. UNICEF is working with national and other partners to provide basic assistance to the most vulnerable children. They are providing 100,000 people a day with safe water, organizing a cholera vaccination campaign that will be launched next week to immunize up to 900,000 people, and providing cholera prevention kits that contain water purification tablets, soap and oral rehydration salts. Between 100 and 200 kits are distributed every day.

In addition, they are delivering an integrated package of services to prevent and treat malnutrition among children under five as well as pregnant and breastfeeding mothers living in the hurricane affected areas, replenishing vaccines and restoring the cold chain so that routine immunization can resume in the health centres that are still operational and in mobile clinics, and distributing emergency medical supplies to 18 health centres.

Joint actions also include setting up mobile child friendly spaces where vulnerable children and families can receive psychosocial support, and training 60 volunteers to staff them, and repairing 22 schools and distributing school-in-a-box and early childhood development kits so that children can resume their learning as soon as possible.

UNICEF requires over $23 million through the end of the year to meet children’s humanitarian needs following the hurricane, including for the cholera response. So far, it has received a mere $6 million.

Jens Laerke, spokesperson for the Office for the Coordination of Humanitarian Affairs (OCHA), told reporters in Geneva that, according to the latest figures from the authorities in Haiti, Matthew has so far caused 546 deaths and left 438 people injured.

He said that needs are vast, especially in the areas of quality water, education, shelter, child protection, health and nutrition. A total of 1.4 million people are in need of humanitarian assistance, and an estimated 40 per cent of them are children. The UN emergency humanitarian appeal for $120 million is far only 33 per cent funded.

In the country’s South, “the government faces challenges in restoring health facilities in affected areas and urgent repairs to restore functionality have been identified,” he said.

Restoring health services to a functional level requires not only fixing structures, but providing electricity and water and sanitation, as well as helping many health workers who themselves have been severely affected by the hurricane’s destruction, according to the Haiti Ministry of Public Health. “The major needs are to renovate existing health structures with durable repairs, to increase humanitarian assistance to rural areas, and to improve water quality and sanitation,” Mr. Poncelet said.

The latest figures from the Haitian government show that 175,509 Haitians are still living in shelters, while more than 1.4 million people are in urgent need of humanitarian assistance.

PAHO/WHO teams identified five priority areas of action for the health sector, estimating that $9 million in emergency funding is needed to carry out essential activities.

These priorities are: restoration of health care delivery capacity and access to health services in the most affected areas; increased epidemiological surveillance to support early detection and timely management of disease outbreaks; intensification of vector-control and protective environmental health measures in impacted areas; rapid and effective response to cholera outbreaks in affected communities; and support for efficient coordination of humanitarian assistance and management of information to effectively address the most urgent humanitarian needs.

A vaccination campaign is planned to start Nov. 8, targeting 820,000 people in 16 communes affected by Hurricane Matthew and that have reported cholera cases or deaths. To prevent additional cholera cases, which are likely to increase in the rainy season from now until December, it is also important to advance on water purification, health promotion, and sanitation at the same time.

Bettina Luescher, spokesperson for the World Food Programme (WFP), said that the agency has delivered food to 400,000 people, as part of its work to support the Government in its work. The situation is dire on the ground, with huge logistical challenges, but together with its partners WFP has reached people by truck, helicopter and boat.

Some 140,000 people are still displaced and living in temporary shelters. The food situation is worrisome: in areas hit by the hurricane crops have been destroyed, along with livestock and seeds, local markets are running out of food and the prices of imported goods are rising.

The planting season is supposed to happen this month and will be affected, which meant in turn that the next harvest, in the early months of 2017 will be affected. WFP aims to reach 800,000 people. In order to do that, it has appealed for $58 million overall and still needs $40 million urgently. 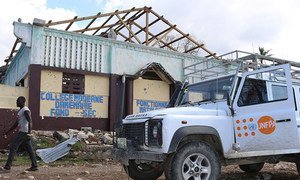 With some 546,000 women of reproductive age in Haiti affected by Hurricane Matthew, the United Nations Population Fund (UNFPA) has urged greater attention to women’s vulnerability in the aftermath of the storm, which devastated not only people’s livelihoods but health facilities and other vital infrastructure.