On International Day, UN calls for end of impunity for crimes against journalists

Warning that impunity for crimes against journalists is rampant, United Nations Secretary-General Ban Ki-moon today called for immediate action to secure justice in cases here journalists have been attacked or killed and for concrete steps from all countries to ensure that media professionals are guaranteed space to operate free from harassment and intimidation.

Today, 2 November, marks the International Day to End Impunity for Crimes against Journalists and an opportunity to raise awareness about the 827 known killings of journalists over the past 10 years. Only eight per cent of perpetrators have been held accountable.

“I pay tribute to the courage of all media personnel who put their lives on the line for the sake of truth,” said Secretary-General Ban Ki-moon in his message on the Day. “And I call for immediate action to secure justice in cases where journalists were attacked, harassed or killed.”

Mr. Ban announced that commemorative activities would be held throughout the world today, including in Myanmar, who will officially recognize the Day for the first time this year as part of its transition to democracy. The UN Educational, Scientific and Cultural Organization (UNESCO) has launched a series of events to tackle impunity and call for concerted state action. The organization is also partnering with Russia to examine persisting conditions and honour lives lost, with Pakistan to strengthen the safety of journalists, and with Tanzania to hold a commemorative workshop.

“Impunity breeds impunity. This is injustice for all,” said UNESCO Director-General Irina Bokova in her message.

She recalled a quote from Dr. Martin Luther King Jr. to emphasize the severe implications of a culture of impunity: “Injustice anywhere is a threat to justice everywhere. We are caught in an inescapable network of mutuality tied in a single garment of destiny. Whatever effects one directly affects all indirectly.”

Each year UNESCO releases a report with the latest facts and figures about the violence around the world towards journalists. According to the report, 2015 was the second deadliest year since 2006. Further, 115 journalists were killed, including the 10 media workers murdered in the unprecedented attack against the French satirical weekly, Charlie Hebdo, in Paris.

In addition to killings, journalists are kidnapped, arbitrarily detained, tortured, intimidated and harassed, both on and offline. Freelance journalists are more vulnerable, as they often work without adequate protections that large media outlets provide. While the overwhelming majority of journalists who are murdered are men, this should not obscure the fact that women journalists face additional risks: gender-based threats, harassment, intimidation, violence and rape.

Regionally, the majority of killings (36.5 per cent) occur in the Arab States, largely due to ongoing conflicts in Syria, Iraq, Yemen and Libya. Latin America and the Caribbean are second, with 51 journalists killed between 2014 and 2015, with Asia and the Pacific accounting for 16 per cent of killings. 90 per cent worldwide are local journalists, although 2014 saw a rise in the killing of foreign journalists.The Secretary-General called upon all countries to recognize and commemorate the International Day, particularly in those countries where journalists are under greatest threat. It is a measure that he says is essential to the 2030 Agenda’s Sustainable Development Goal (SDGs) 16, on peace, justice and strong institutions.

Ms. Bokova called for new mobilization efforts to implement the UN Plan of Action on the Safety of Journalists and the Issue of Impunity.

“We must accelerate the pace,” she urged.

The United Nations has adopted resolutions to promote journalists’ safety and end impunity and UNESCO is working with Governments, non-governmental organizations, professional associations and journalists to strengthen judicial capacities and ensure safety mechanisms.

And while “more Governments are integrating international standards on the safety of journalists in national and media legislation,” the Director-General said, “we must all do more.”

Earlier this year, UNESCO sent letters to 62 member States regarding the killings of journalists from 2006 to 2015, for which the agency had no record indicating that the cases had been solved. These requests accounted for 784 of the 827 murders. Of the 62 member States contacted, 40 responded and 32 provided concrete information on the status of judicial investigations. Also, 22 Member States have still not replied.

The agency has also launched a campaign, “My Killers Are Still Free,” which shares the audio testimonies of close relatives, colleagues and lawyers of journalists who have been killed.

“I encourage everyone to stand with UNESCO in condemning ever fatal attack against a journalist, in calling for full investigation of such crimes, in demanding appropriate punishment for those committing these violations,” announced Ms. Bokova.

More information about UNESCO’s efforts can be found online, and highlights from the 2016 report are availablehere.

All sides in conflicts must protect journalists – Annan 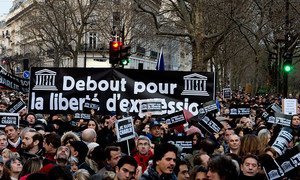