The Office of the UN High Commissioner for Refugees (UNHCR) has reported that it is assisting France, which decided to close the refugee and migrant camp in Calais, that has become known as ‘the Jungle,’ as it is “not fit for human habitation.”

The people in the camp have been transferred to accommodation centres throughout France, and a number of unaccompanied children left the camp for the United Kingdom, where they have family ties. The refugee agency highlighted the need for greater responsibility sharing and coordination between European Union member States.

According to a news release today from the Office of the UN High Commissioner for Human Rights (OHCHR), France and the UK have some disagreements over who should take responsibility for the majority of unaccompanied children and this situation has led to major violations of these children’s rights.

“Hundreds of children have been subjected to inhumane living conditions, left without adequate shelter, food, medical services and psychosocial support, and in some cases exposed to smugglers and traffickers,” the experts said.

The dismantling of the Southern part of the "jungle" of Calais in March 2016. Photo: UNICEF/Laurence Geai

The Committee – tasked with monitoring worldwide implementation of the Convention on the Rights of the Child by States Parties – called on the two countries to urgently address the situation of unaccompanied children who had been forced to take shelter in disused shipping containers or sleep outside.

“The events of the past week have shown clearly that political and other considerations prevailed over the initial promises by both Governments that the situation of unaccompanied children would be their priority. The best interests of the child have been completely disregarded,” the experts said.

While welcoming the announcement by the French authorities that the children are being relocated to dedicated centres where the next steps concerning their future will be decided, the Committee is of the view that both Governments cannot say they were caught off-guard by the Calais situation.

“When the Committee reviewed France and the UK earlier this year, both States were given precise recommendations regarding the treatment of unaccompanied child migrants, including those in Calais,” the release explained.

These recommendations included the need to stop the detention of asylum-seeking and migrant children; the need to conduct age assessments only in cases of serious doubt and when so, through multi-disciplinary and transparent procedures; and the obligation to respect children’s right to humane living standards and adequate health care services.

“The failures regarding the situation of children in Calais are not isolated events but highlight the shortcomings of a migration system built on policies that are neither developed nor implemented with child rights in mind,” the experts underscored. 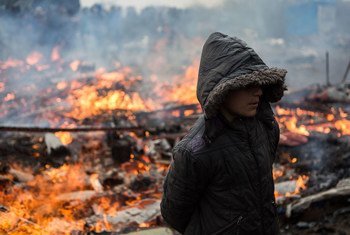 As fires burn through Calais ‘Jungle,’ UNICEF urges protection of children remaining in the camp

27 October 2016
“Deeply troubled” that last night, while fires burned in parts of the Calais refugee and migrant camp that has become known as “the Jungle” burned, many children were forced to sleep out in the cold, the United Nations Children’s Fund (UNICEF) today underscored that authorities on the ground must guarantee their protection.