Highlighting that the humanitarian situation in Yemen continues to deteriorate despite the efforts of relief actors, the United Nations Special Envoy for Yemen called on all parties to recommit themselves to the promises made earlier and to engage fully and constructively with the UN-mediated peace process.

“After 18 months of horrific fighting, thousands of deaths, injuries and unspeakable human suffering, we all need to ask how long will Yemenis remain hostages to personal and reckless political decisions,” Special Envoy Ismail Ould Cheikh Ahmed told the Security Council today at a briefing on the situation in the country.

“Despite […] calls for the Yemeni parties to fully commit to the peace process, the parties continued to embark on unilateral actions, which risk undermining the prospects for peace,” he added.

Yemen has been engulfed in violence for several years now – a confrontation between the country’s Houthis (Ansar Allah) and the Government of Yemen in early 2014 led to a Houthi advance on the capital, and an ensuing conflict which has involved support from outside parties. The UN has been heavily involved in efforts to resolve the crisis.

In his briefing, the Special Envoy reported that the military situation continues to worsen a very dire the humanitarian situation and urged for far greater attention from the international community.

Illustrating the severity of the crisis, Mr. Cheikh Ahmed said that only 45 per cent of the country’s health facilities remain functional and the medical situation has been further exasperated by the prohibition of commercial flights into Sana’a, meaning many are not able to travel overseas to receive treatment. He further reported attacks against civilians, including the attack on a gathering of mourners on 8 October that killed more than 140 people and injured 550 as well as the shelling of the Bir Basha district of the city of Taiz which resulted in the death of nine individuals, including three children.

“These incidents are a horrific reminder of the consequences of war that has blighted the country during the last eighteen months of conflict,” the Special Envoy noted.

He highlighted that the worsening economic situation could further complicate the humanitarian crisis, and expressed concern over recent attacks on international vessels travelling off the coast of Yemen.

Such incidents, he said, risked a more acute escalation of the conflict, and threaten the security of international maritime movement.

Mr. Cheikh Ahmed further told the Security Council that he will return to the region immediately to start consultations with both parties in Sana’a and in the Saudi capital of Riyadh with the aim of reaching a detailed agreement based on a comprehensive and detailed roadmap, consistent with relevant Council resolutions, to end the conflict.

Calling on Council members for their full support, the Special Envoy said, “The dawn of peace could be near, in case those responsible decide to prioritize national interest and start working on rebuilding a stable state, which guarantees the rights of all of its people without discrimination.”

Salvage what is left in Yemen before too late

Also at today’s briefing, the UN Emergency Relief Coordinator, Stephen O’Brien, told the Security Council, over telephone that 80 per cent – 21.2 million – of Yemen’s population needed humanitarian assistance and stressed the need for effective and independent investigations into alleged war crimes.

Recalling his recent trip to the country, Mr. O’Brien added: “I saw the desperation, fear, and resignation in the deep-sunken eyes of people I met who have lost all hope – either moved to anger or powerless despair.” He also underscored that international humanitarian law must be respected by all parties to the conflict and called for holding perpetrators on all sides accountable.

Mr. O’Brien, who also heads the UN Office for the Coordination of Humanitarian Affairs (OCHA), told the 15-member body that the conflict is having a devastating effect on public institutions, which are increasingly unable to provide basic social services.

The UN relief chief also flagged that humanitarian actors do not have the capacity or the resources to provide services to a population of 26 million Yemenis, and informed the Council that an appeal for funding for the humanitarian response in Yemen is less than half funded.

Concluding his briefing, Mr. O’Brien said that it was “high time” the parties put the Yemeni people first and reached a peaceful agreement to “salvage” what is left of the infrastructure, economy, and social services in the country.

“If disregarded,” he said, “the collapse of the country will have menacing consequences not only for the Yemeni people but to the entire region.” 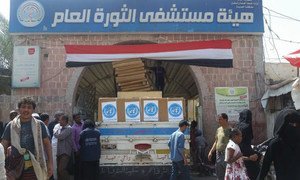 Warning that the situation in Yemen is growing more dire every day, the International Organization for Migration (IOM), the lead United Nations-affiliated agency on migration issues, launched today a regional appeal for nearly $150 million to help provide desperately needed assistance to the country’s people trapped amid the escalating conflict.