16 years ago today, the United Nations Security Council adopted resolution (S/RES/1325) on women, peace and security, which has since come to be famously associated with the number 1325 within the UN system.

The resolution, adopted on 31 October 2000, reaffirms the important role of women in the prevention and resolution of conflicts, peace negotiations, peace-building, peacekeeping, humanitarian response and in post-conflict reconstruction. It also stresses the importance of their equal participation and full involvement in all efforts for the maintenance and promotion of peace and security.

Resolution 1325 urges all actors to increase the participation of women and incorporate gender perspectives in all United Nations peace and security efforts.

Since its adoption, women have increasingly become a part of the United Nations peacekeeping operations, where female peacekeepers act as role models in the local environment, inspiring women and girls in often male-dominated societies to push for their own rights and for participation in peace processes.

Brigadier General Zewdu Kiros Gebrekidan, an Ethiopian national, was recently appointed as Deputy Force Commander of the United Nations Interim Security Force for Abyei (UNISFA), which was established after an agreement to demilitarise the disputed border region allowed Ethiopian troops to monitor the area.

On a recent visit to the UN headquarters in New York, Brigadier General Gebrekidan spoke with UN News Centre about her appointment, experience and priorities as Deputy Force Commander of the Interim Security Force.

UN News Centre: What was your first reaction when you heard you had been appointed United Nations Interim Security Force for Abyei (UNISFA) Deputy Force Commander?

Brigadier General Zewdu Kiros Gebrekidan: I felt happy on this appointment because participation of women in the military and United Nations peacekeeping missions is low. I got this opportunity in a high-level position, and I am required to perform at the highest level and fulfil the requirements of the job. I am so grateful for this opportunity.

UN News Centre: What do you see as your key priorities in fulfilling UNISFA’s mandate?

Brigadier General Zewdu Kiros Gebrekidan: A major priority for UNISFA is civilian protection, and civilian protection is one of the main mandates of UNISFA. We protect civilians through a lot of activities, including patrolling on the ground as well as aerial patrol; day and night, 24 hours a day and 7 days a week.

Unfortunately some focal groups, like women, are not involved in the peace process. Women are a very important part of any peace process, and they should be participating fully.

UN News Centre: How does it feel to be in such a senior position in a field where top positions are mostly held by men?

Brigadier General Zewdu Kiros Gebrekidan: Peacekeeping, in high level positions, is covered mostly by men. I did not feel good about that because women make half of the society, so exclusion of half of the population does not achieve much in any job. So, although I am happy to be in this position, I am not happy that half of the society has been left out for far too long. 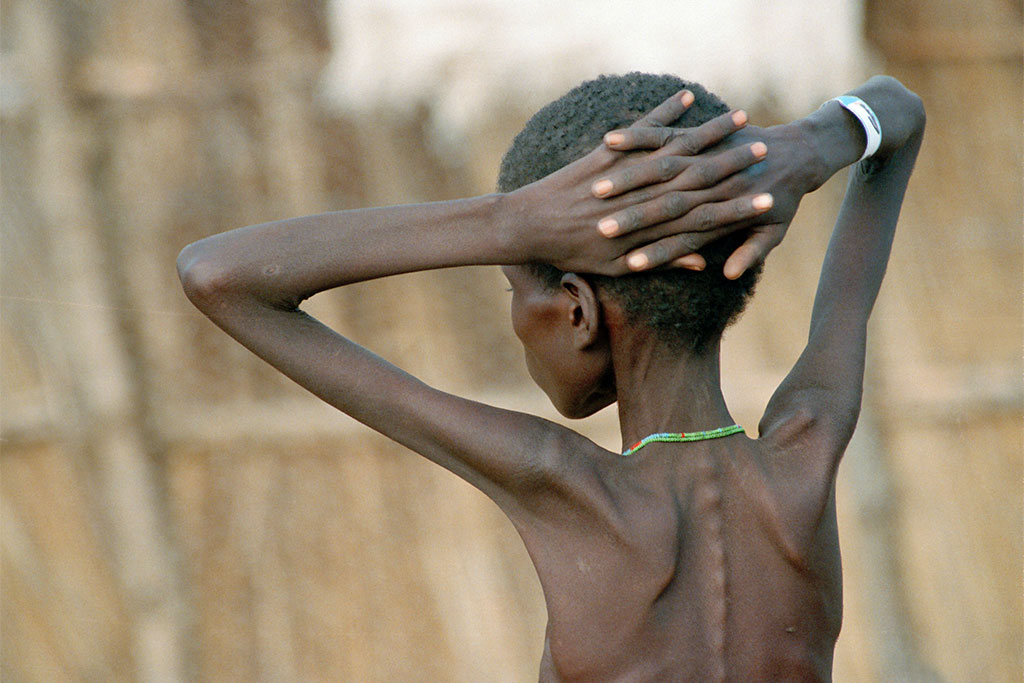 Skeletal children at a supplementary feeding centre in Ajiep

Operation Lifeline, which was launched in 2002 by the United Nations, was an emergency push to assist up to 100,000 Sudanese civilians displaced by fighting in the southern part of the country. Fighting which began in June 2002 has forced thousands to flee from the Western Upper Nile into Bahr el Ghazal. "They have been forced to walk for at least three days and it is estimated that up to 50 per cent of the displaced are children," said UN spokesman Fred Eckhard at the time. UN Photo/Eskinder Debebe 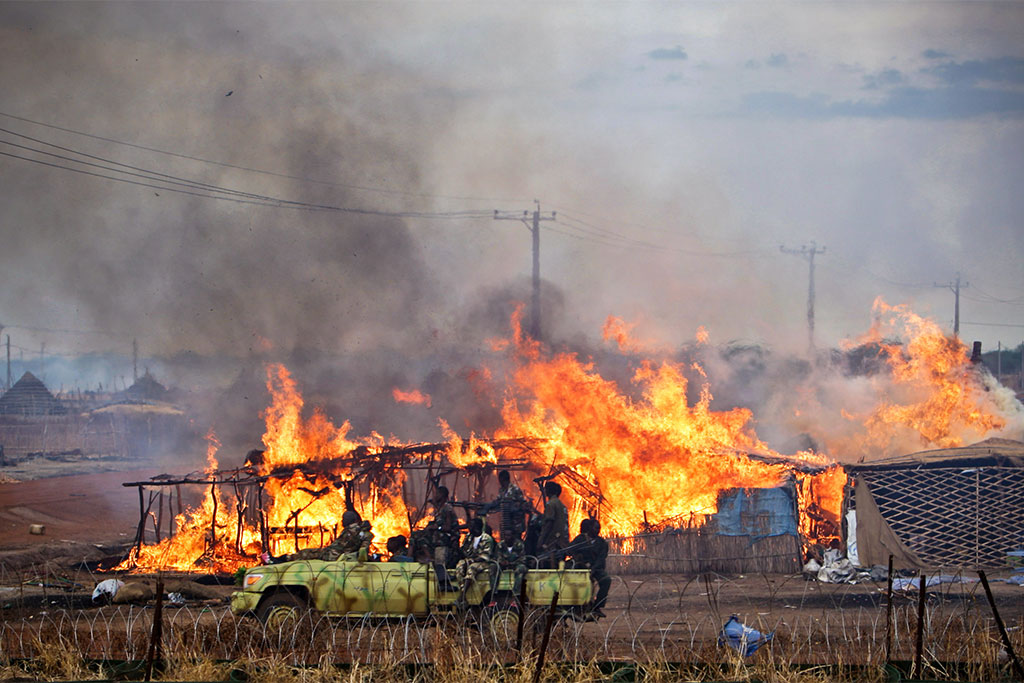 In May 2011 the town of Abyei, which was contested by both Sudan and South Sudan, was the scene of renewed violence, including looting and burning, following the takeover of the area by Sudanese Government forces. Tens of thousands of civilians have been uprooted by the recent clashes in the disputed town. UN Photo/Stuart Price. 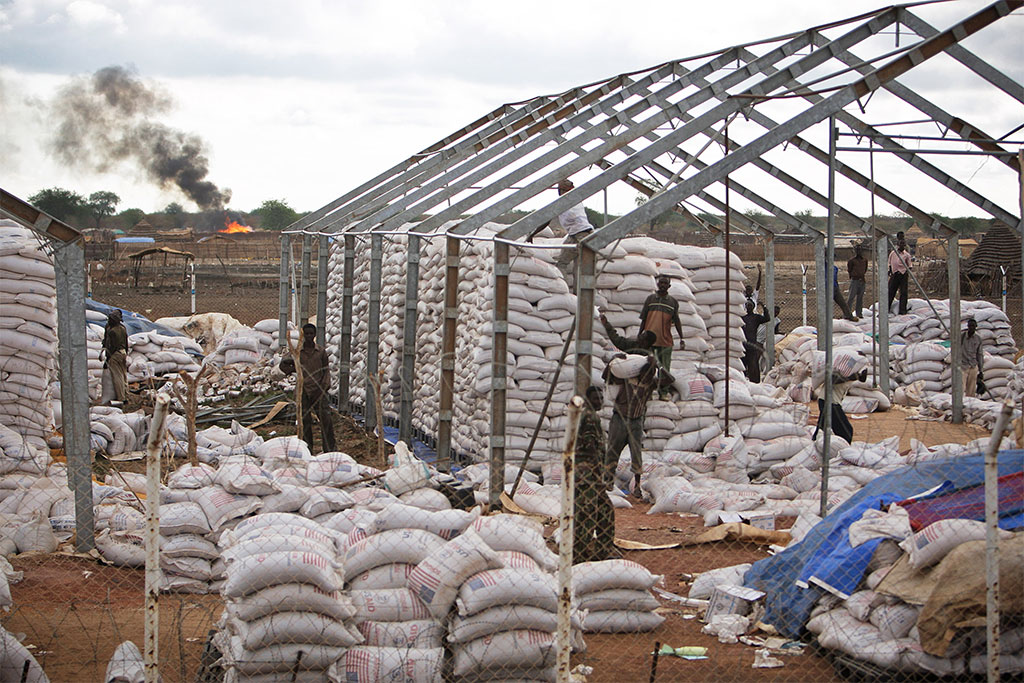 Aftermath of Attack on Abyei

Unidentified men loot the World Food Programme compound in Abyei as fires burn in the background. It is the main town of the disputed Abyei area on the border of Sudan and newly independent South Sudan. In a statement yesterday, the United Nations strongly condemned the burning and looting currently being perpetrated by armed elements in the area, following the seizure of Abyei town by Sudanese Government troops in May 2011. UN Photo/Stuart Price 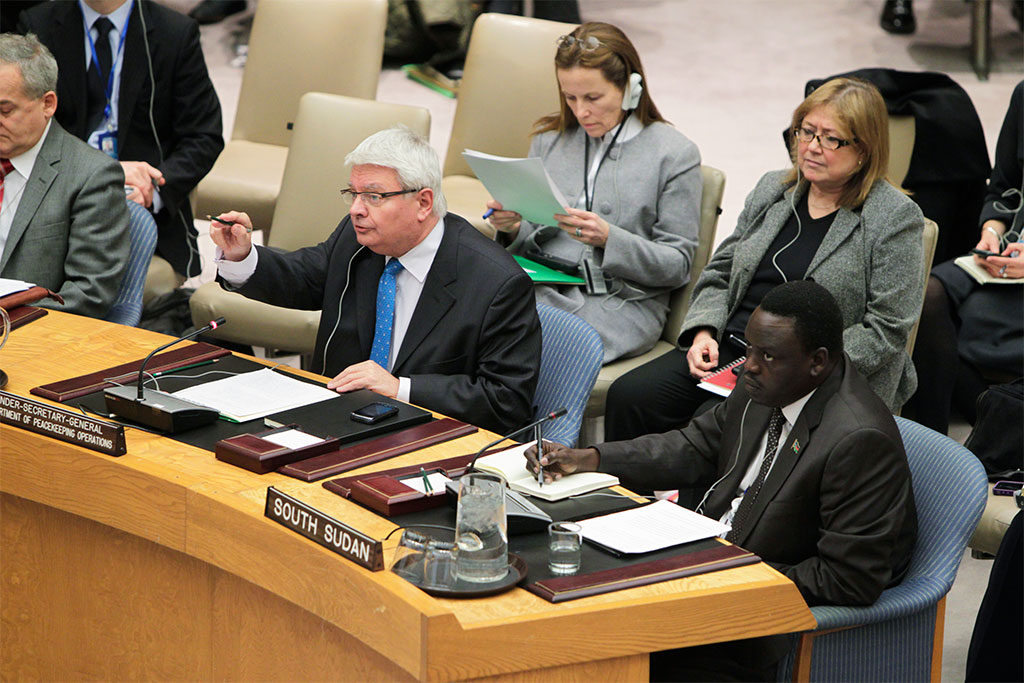 Hervé Ladsous (front, left), Under-Secretary-General for Peacekeeping Operations, speaks at a meeting of the Security Council on Abyei, a contested territory on the Sudan-South Sudan border, where a UN peacekeeping force (UNISFA) was established in June 2011. Pictured with Mr. Ladsous are David Buom Choat (right), Acting Permanent Representative of South Sudan to the UN, and behind Mr. Choat, Susana Malcorra (on right), Under-Secretary-General for Field Support. UN Photo/Eskinder Debebe 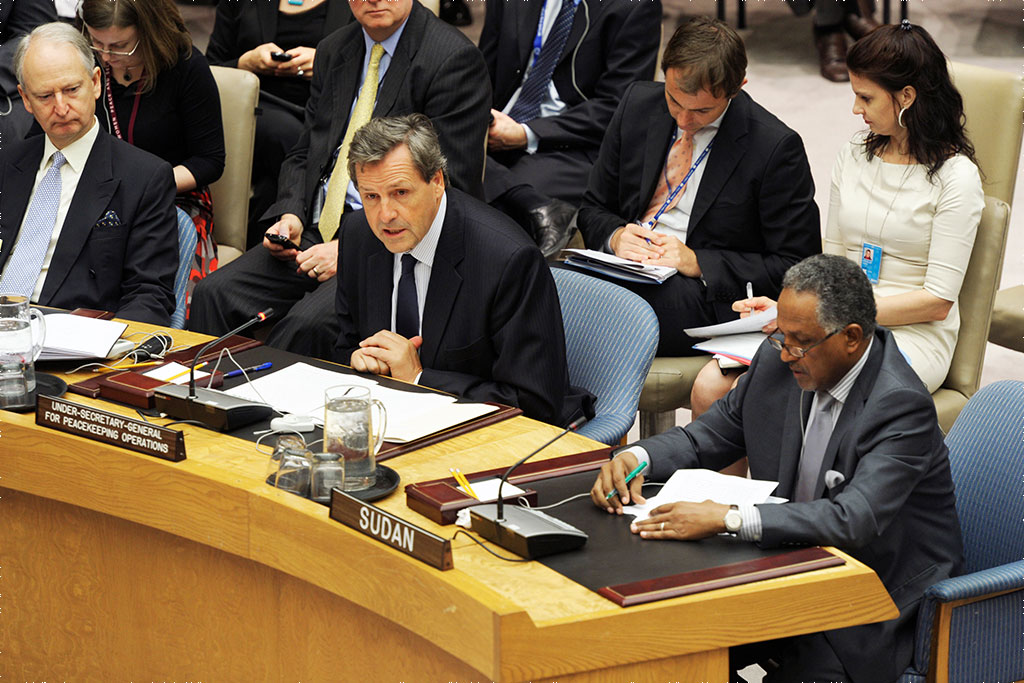 The birth of the Republic of South Sudan is the culmination of a six-year peace process and a new chapter in a region that has seen little peace in the last 50 years. On 9 July 2011 South Sudan became the newest country in the world. Not much later, on the 14th of July, South Sudan became the 193rd member of the United Nations. The photo above pictures Alain Le Roy (centre), Under-Secretary-General for Peacekeeping Operations addressing the Security Council, and on the right Daffa-Alla Elhag Ali Osman, Permanent Representative of Sudan to the United Nations, during the meeting of the Security Council prior to welcoming South Sudan to the UN. UN Photo/Eskinder Debebe 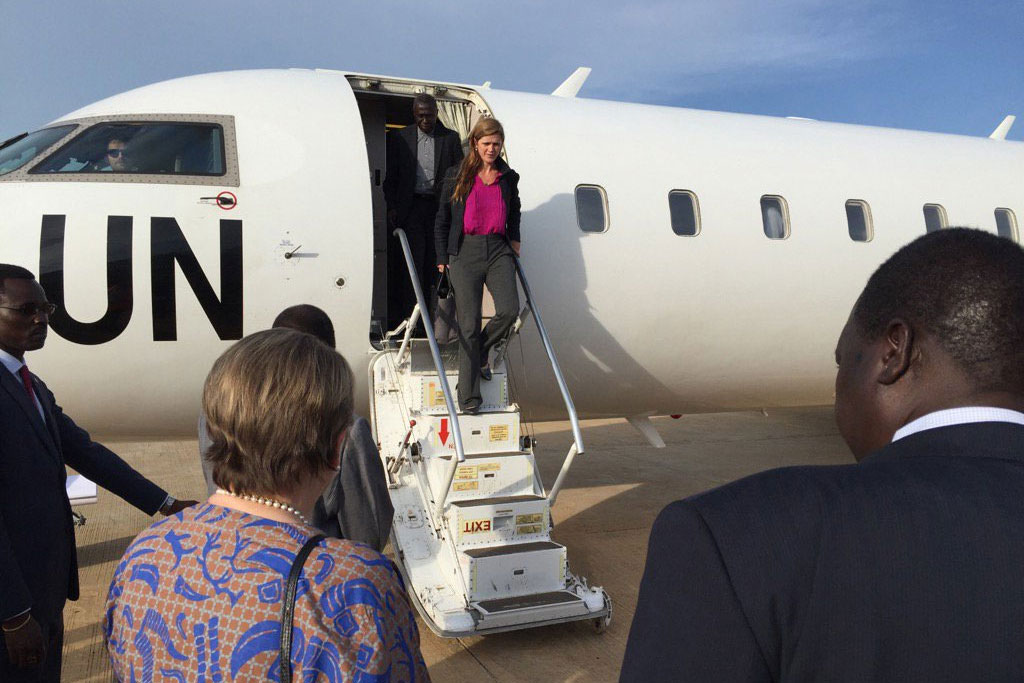 A delegation from the United Nations Security Council arrives in the fall of 2016 in South Sudan, where it will reinforce recent messages made to the authorities as well as discuss how the UN peacekeeping mission there can help them improve the security and humanitarian situation in the wake of recent violence. Photo: UNMISS

UN News Centre: Can you describe your experience in the Ethiopian army and how you were perceived as a female officer?

Brigadier General Zewdu Kiros Gebrekidan: I have almost 30 years of experience in the military. I have led troops, from platoon leader, up to the level of army commander. This long chain of command gave me experience on how to lead the army, how to manage, how to build strategies, how to prepare for every military situation. A military career involves war and peace, and one has to know how to manage, how to lead, and how to prepare for any military scenario. In Ethiopia the army is composed of females and males, and I led both genders. One unit was composed of both female and male soldiers, and I led and treated them equally: both were given the same mission, or assigned to any mission. From the lower ranks up the ladder, they would build their capacity. I would encourage females in any situation or any duties they take on, to strongly perform and compete with the men.

UN News Centre: Based on your experience – as a woman serving in the Ethiopian army, and now to UNISFA’s leadership – what do you project your contribution to UNISFA to be?

Brigadier General Zewdu Kiros Gebrekidan: First of all, I can contribute greatly to its leadership. The military leadership is supposed to give guidance and engage the troops, and to implement the Mission’s mandate by proper planning. So I can contribute to effective planning. If the main plan does not succeed, you sit down and prepare a contingency plan. All commanders are supposed to be aware of how to implement the Mission’s plan, and this is strongly controlled by a chain of command or command control system. The leadership is also supposed to step up before any incidents happen, to protect civilians. This way, we would fulfil our primary mandate of protecting civilians. I can contribute by helping to strengthen those aspects of the Mission.

UN News Centre: How important is it for women to take part in UN peacekeeping?

Brigadier General Zewdu Kiros Gebrekidan: Women have their own part in any job, so they should not be denied a chance to play their part. They should play their part strongly, and perform well. They should develop their confidence and build their capacity to compete with men.

"Women have the right to participate in all jobs,” according to Brigadier General Zewdu Kiros Gebrekidan, Deputy Force Commander for the United Nations Interim Security Force for Abyei (UNISFA). In an interview with the UN News Centre about the role of women in UN peacekeeping, Ms. Gebrekidan also underlined the important role that female soldiers play during peacekeeping missions, including their ability to better connect with children and women within affected the communities.

UN News Centre: What is your message to women in the military who are interested in pursuing a career such as yours?

UN News Centre: Do you think protection of women in conflict situations or in peacekeeping would be better if we had more women peacekeepers?

UN News Centre: What challenges does UNISFA face now in the execution of its mandate?

Brigadier General Zewdu Kiros Gebrekidan: UNISFA has a lot of challenges. The main challenge is lack of political progress. This affects our mandate because we have no administration, no police; nothing on both sides of Abyei. There is no development on the political front. The second one is an operational matter, which has to do with logistics. Security is another challenge, because of unknown irregular armed groups that enter villages to attack and kill civilians. Weather conditions also pose another challenge. In dry seasons, it gets very hot, and in rainy seasons it gets very muddy, and there’s no movement. This restricted movement during rainy seasons affects our operational capacity. The other challenge is infrastructure; there is no main support road and the rainy season means closed roads. Only one main supply road remains functional, for the North (Sudan). There are many challenges in the Mission.

Recently returned from a three-day visit to South Sudan, United Nations Emergency Relief Coordinator Stephen O’Brien today painted a grave picture of the enormous humanitarian crisis facing the world’s newest country and the devastating impact of the ongoing violence on its people.