The United Nations Security Council has condemned in the “strongest terms” an attack yesterday on the Embassy of the Russian Federation in Syria's capital Damascus as well as the widely reported recent attacks on schools in the country, according to separate statements issued late yesterday.

In the first statement, condemning the mortar shelling of the Russian Embassy, that caused “significant material damage,” the Council members recalled the principle of the inviolability of diplomatic and consular premises, and the obligations on host Governments to take all appropriate steps to protect these premises against any intrusion or damage, and to prevent any disturbance of the peace of these missions or impairment of their dignity, and to prevent any attack on diplomatic premises, agents and consular officers.

“The members of the Security Council expressed outrage at all attacks against civilians and civilian objects, and indiscriminate attacks throughout Syria,” noted the statement.

The Council members also recalled all obligations under international humanitarian law must be respected in all circumstances by all parties and in particular, the obligation to distinguish between civilian populations and combatants and the prohibition against indiscriminate attacks and attacks against civilians and civilian objects, the statement added.

Reaffirming the primary responsibility of the Syrian authorities to protect the population, the Council members reiterated that parties to the armed conflict may not make civilians the object of attack or use them as human shields.

They further reiterated that that any acts of terrorism are criminal and unjustifiable, regardless of their motivation, wherever, whenever and by whomsoever committed and called on all parties to take measures to avoid harm to civilians.

In the statement, members of the Council also reaffirmed the need for all States to combat by all means, in accordance with the UN Charter and obligations under international law, threats to international peace and security caused by terrorist acts.

The members of the Security Council also reiterated that the only sustainable solution to the current crisis in Syria is through an inclusive and Syrian-led political process with a view to the full implementation of the Geneva Communiqué, which was adopted after the first international meeting on the issue on 30 June 2012, and since endorsed by the Council. 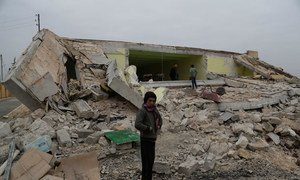 United Nations Secretary-General Ban Ki-moon has condemned the reported attack today on a school in the western part of Syria's Aleppo city that killed a number of children.