Some of the concerns he listed included Government control of recent elections, a vote count that was “neither honest nor transparent,” the lack of a free press, government suppression of peoples’ ability to meet, and jailing of a political blogger.

“Unfortunately, I have to report an unchanged legal and administrative system of the restriction of human rights, which by its mere existence cannot be conducive to meaningful elections,” said the expert in a press release.

“In a nutshell, nothing has changed in Belarus on the human rights front,” he concluded.

The human rights community scrutinized Belarus’s presidential elections last October and those for Parliament in September, but found no signs of progress. Experts had hoped that a release of political prisoners on the eve of the presidential election and an absence of violence during the electoral process were indicative of improvements, but they ultimately found that such improvements were “nominal” and had no effect on the Government-controlled elections.

“Belarus is far from breaking away from the standard of the last two decades during which it has been the only nation in Europe with no modicum of pluralism in its Parliament,” the expert said, and also expressed concern that the Central Election Commission has retained the same chairperson for 20 years, and that the composition of all electoral bodies is decided by either the president or local state authorities.

Meanwhile, fundamental freedoms of expression and of the media continue to be violated. Belarus remains the only European country with no privately-owned nationwide media. Its state-run media was used as a platform for candidates supported by the Government.

Mr. Haraszti pointed to the case of Eduard Palchys, a political blogger who was held from May to October 2016 “on made-up grounds, but in reality because of the political views expressed in his blog.”

Elsewhere, citizens’ freedom of association and assembly continue to be violated. Any gathering, political party or association requires State approval, and those partaking in unauthorized activities are charged with breaking the law.

Belarus also continues to use the death sentence, which was used one day after most of the European Union’s sanctions against the country were lifted. 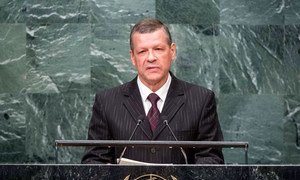 There is a feeling among people today that the world is not “developing within the framework of rational order and common sense” as conflicts and an increasing number of transnational conflicts give rise to a feeling of chaos, the Deputy Vice Minister of Belarus told delegations in the United Nations today adding that such chaos exists side by side with unprecedented interconnectedness and technological progress.