Greater investment in greener, more efficient and sustainable transport can save trillions of dollars and help achieve the global sustainability goals, according to a United Nations report launched today that provides 10 recommendations on how resources can be redirected to the transport sector.

“Transport can build prosperity in the broadest sense, enhancing the quality of life for all while protecting the environment and fighting climate change,” said Martin Lundstedt, Chief Executive Officer of Volvo and co-chair of the High-Level Advisory Group on Sustainable Transport ,which authored the report that was launched today at UN Headquarters in New York.

“We need bold innovation and a true partnership among governments, civil society and the private sector,” he added.

Finding that global, national and local transport systems are hobbled by inefficiencies and a lack of sustainable investments, the report, Mobilizing Sustainable Transport for Development, provides 10 recommendations on how governments, businesses and civil society should re-direct resources in the transport sector to advance sustainable development.

“Sustainable transport is crucial for the improvement in the quality of life of people both in cities and rural settings, at a national and international level,” stated Carolina Tohá, Mayor of Santiago, Chile and the other co-chair of the Group.

The report found that a transformational change to sustainable transport can be realised through annual investments of around $2 trillion, similar to the current 'business as usual' spending of $1.4 trillion to $2.1 trillion.

Investments in sustainable transport, the experts found, could lead to fuel savings and lower operational costs, decreased congestion and reduced air pollution. Additionally, it is estimated that efforts to promote sustainable transport can deliver savings of up to $70 trillion by 2050.

In the report's foreword, Secretary-General Ban Ki-moon noted that sustainable transport is essential to overall achievement of the Sustainable Development Goals (SDGs) as well as to efforts to fight climate change, reduce air pollution and improve road safety: “Sustainable transport supports inclusive growth, job creation, poverty reduction, access to markets, the empowerment of women, and the well-being of persons with disabilities and other vulnerable groups.”Focusing on important issues such as road safety, traffic congestion and climate impacts, the expert panel's 10 specific recommendations include the establishment of monitoring and evaluation frameworks, the promotion of sustainable transport technologies and the increase of international development funding. The report calls for robust engagement by all stakeholders to ensure all members of society have access to jobs, markets, education and health care, through sustainable transport.

At present, the transport sector is responsible for some 23 per cent of energy-related greenhouse gas emissions, and 3.5 million premature deaths result from outdoor air pollution annually, mostly in low and middle income countries. About 10 to 15 per cent of food is lost during processing, transport and storage given a lack of modern facilities, trucks, access to refrigeration, and poor roads.

Nearly one billion people worldwide still lack adequate access to road networks, which increases isolation and marginalization and deepens social inequities. Over 1.2 million people are killed annually in road traffic accidents, causing, in addition to human loss and suffering, billions of dollars of associated costs which amount, in some countries, to 1-3 per cent of GDP.

“Sustainable Transport enables people to access better services, jobs, opportunities and family connections,” said Ms. Tohá. “It is also a space where people spend a significant amount of time every day, and therefore it needs to consider safety issues as well as conditions of dignity for users.”

“Leaving no-one behind in the context of sustainable transport means that in the coming decades we are able to build transport systems that are inclusive, integrated, gender-sensitive and that have people's needs at their core,” she stressed.

The report is also meant to serve as a contribution to the first-ever Global Sustainable Transport Conference , which Mr. Ban will convene in Ashgabat, Turkmenistan, on 26-27 November 2016.

The Advisory Group was appointed in August 2014 by the Secretary-General for a period of three years. 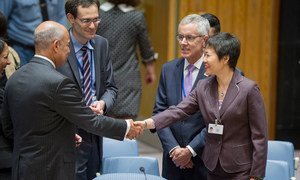 A Memorandum of Understanding to enhance cooperation between urban development and aviation was signed in Quito, Ecuador, during the United Nations Conference on Housing and Sustainable Urban Development.