Expressing regret over the intention of three African countries to withdraw from the International Criminal Court (ICC), United Nations Secretary-General Ban Ki-moon called for strengthening the Court from within its processes.

“Deterring future atrocities, delivering justice for victims, and defending the rules of war across the globe are far too important priorities to risk a retreat from the age of accountability that we have worked so hard to build and solidify,” said Mr. Ban at the start of a Security Council meeting earlier today on cooperation between UN and regional organizations on matters of international peace and security.

“The world has made enormous strides in building a global system of international criminal justice, with the International Criminal Court as its centrepiece,” he added, recalling the ground-breaking convictions secured by the ICC and other international tribunals.

In his remarks, the UN chief said that these and other gains have also been accompanied by setbacks and shortcomings such as prosecutions taking many years and not all countries accepting the Court's jurisdiction.

“Even some of those that do [accept the ICC's jurisdiction], do not always support the Court fully,” he noted.

He also noted the concern raised that the Court has convicted only Africans despite evidence of crimes in other parts of the world, and stressed that such challenges are best addressed not by diminishing support for the ICC, but by strengthening it from within.

South Africa (24 October) and Burundi (yesterday) have informed the Secretary-General, who is the depository of the Rome Statute of the ICC, of their intent withdraw from the Court.

According to a UN spokesperson, official communication from Gambia – the third country which, according to reports, is intending to withdraw – has not been received.

“I regret these steps, which could send a wrong message on these countries' commitment to justice,” said the Secretary-General this morning.

According to ICC, the withdrawal will only come into effect one year after the official notification.

The Court's founding Rome Statute sets out the tribunal's jurisdiction over genocide, crimes against humanity, war crimes and – as of an amendment in 2010 – the crime of aggression. In addition to jurisdiction, it also addresses issues such as admissibility and applicable law, the composition and administration of the Court, investigations and prosecution, trials, penalties, appeal and revision, international cooperation and judicial assistance, and enforcement.

♦ Receive daily updates directly in your inbox - Subscribe here to a topic.
♦ Download the UN News app for your iOS or Android devices.
criminal|Court 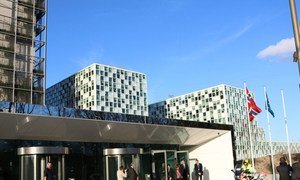 United Nations Secretary-General Ban Ki-moon has regretted the decision of the South African Government to withdraw from the Rome Statute of the International Criminal Court (ICC) and expressed hope that the country will reconsider its decision before the withdrawal takes effect.