UN Photo/Amanda Voisard
Special Rapporteur on the situation of human rights in Eritrea Sheila B. Keetharuth.

28 October 2016
Eritrean officials have committed crimes against humanity since 1991, including enslavement, imprisonment, enforced disappearances, torture, other inhumane acts, persecution, rape and murder, a member of the former United Nations Commission of Inquiry on Human Rights in the country reported to UN Member States.

“My plea to you […] is for you to pay heed to voices of victims of crimes against humanity in Eritrea,” said Sheila Keetharuth, presenting the panel’s final report to the UN General Assembly’s main body dealing with social, humanitarian and cultural issues (Third Committee).

The three-member Commission, established by the UN Human Rights Council, ended its mandate in June 2016.

Ms. Keetharuth highlighted the Commission’s clear findings that crimes against humanity have been committed since 1991 by Eritrean officials, adding that such a dire assessment left no room for “business as usual” in the international community’s engagement with the Government of Eritrea.

“The crimes of enslavement, imprisonment, enforced disappearances, torture, other inhumane acts, persecution, rape and murder have been committed as part of a widespread and systematic campaign against the civilian population,” she said. “The aim of the campaign has been to maintain control over the population and perpetuate the leadership’s rule in Eritrea.”

Children in the town of Embetyo, Eritrea. Photo: OCHA/Gemma Connell

She explained that the Commission has concluded the Government of Eritrea has neither the political will nor the institutional capacity to prosecute the crimes documented, and therefore recommends that the UN Security Council refer the situation in Eritrea to the prosecutor of the International Criminal Court (ICC) and that the African Union establish an accountability mechanism.

“There is still no constitution, no parliament where laws are discussed, enacted, and where questions of national importance are debated; indefinite national service persists, with its adverse impacts on individual rights; there is no free press and no [non-governmental organizations], except for Government-sponsored ones,” she said.

“The population lives in fear and the Government still controls their daily life, making the enjoyment of all human rights and fundamental freedoms by all Eritreans a remote possibility,” she added.

She noted that while several foreign delegations, journalists and others had been invited to visit Eritrea over the past year, the rampant human rights violations taking place in isolated locations and detention facilities were not apparent to the casual visitor.

Ms. Keetharuth noted that Eritreans were among the largest numbers of African nationals seeking asylum in Europe and that the overall recognition rate for Eritrean asylum seekers in European countries remained high.

“The findings of the Commission underscore that it is not safe to forcibly return those who have left Eritrea,” she stressed, noting that the Commission’s first report documented that individuals forcibly repatriated, with a few exceptions, have been arrested, detained and subjected to ill-treatment and torture.

“I appeal to Member States to grant Eritreans access to their territory and asylum procedures,” she said, reiterating her call to protect all Eritrean asylum-seekers from refoulement and to refrain from any forced repatriation to Eritrea or to third countries where they may still be at risk or unwelcomed.

Ms. Keetharuth is also UN Special Rapporteur on the situation of human rights in Eritrea.

UN chief welcomes meeting between leaders of Djibouti and Eritrea

Security Council will not renew arms embargo on Ethiopia and Eritrea 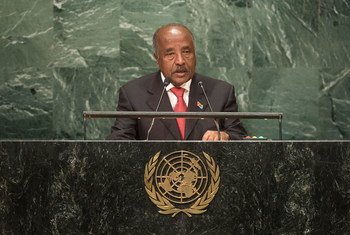 26 September 2016
Telling the United Nations General Assembly that over the 25 years of Eritrea’s independence it has faced a “concerted onslaught” of difficulties – incessant hostility, occupation, and sanctions – the country’s Foreign Minister today said that resilient Eritrea and Eritreans, at home and abroad, were nevertheless able to fend off the attacks on their nation and protect their hard-won freedom.