Special Adviser Karen AbuZayd prior to the UN Summit for Refugees and Migrants, addressing large movements of refugees and migrants. Photo/Amanda Voisard
28 October 2016
Migrants and Refugees

Karen AbuZayd worked with UN entities and undertook consultations with Member States and relevant stakeholders in the lead up to the first-ever UN Summit on the issue.

It all culminated in a landmark agreement, adopted on 19 September, to address the challenges faced by people on the move.

Countries promised to protect and save the lives of refugees and migrants as well as fairly divide the burden and responsibility for hosting and supporting them.

The UN estimates that a record 65 million people worldwide have been forced out of their homes, thousands die at sea each year while those fleeing war on land are blocked by closed borders.

A month has gone by and the buzz surrounding the ground breaking agreement has not died down, Ms. AbuZayd told UN News Centre, when first asked in an interview if the summit was a success.

Karen AbuZayd: We thought it was very much a success. In terms of having 193 states all sign up to a number of commitments and some of the things that were
achieved were good refugees and migrants and should make a difference in their lives.

UN News Centre: What impact will the New York declaration have?

Karen AbuZayd: Well, the impact, we hope, will be on the refugees and migrants, and how they live and how they are received in countries and what happens to them after they get to a new place. So there were a lot of commitments related to that – to receiving them – and what we called inclusion: making sure they learn the language, that they get a job, that they get education. All of these things are part of the commitment that states have signed up to.

An aerial view of Za’atri refugee camp, host to tens of thousands of Syrians displaced by conflict, near Mafraq, Jordan. Secretary-General Ban Ki-moon visited the camp as part of a two-leg trip in Jordan and Turkey to assess the Syrian refugee situation in those countries. UN estimates from 2015 are that 1.4 million Syrians live in Jordan, 650,000 of whom are refugees. UN Photo/Mark Garten 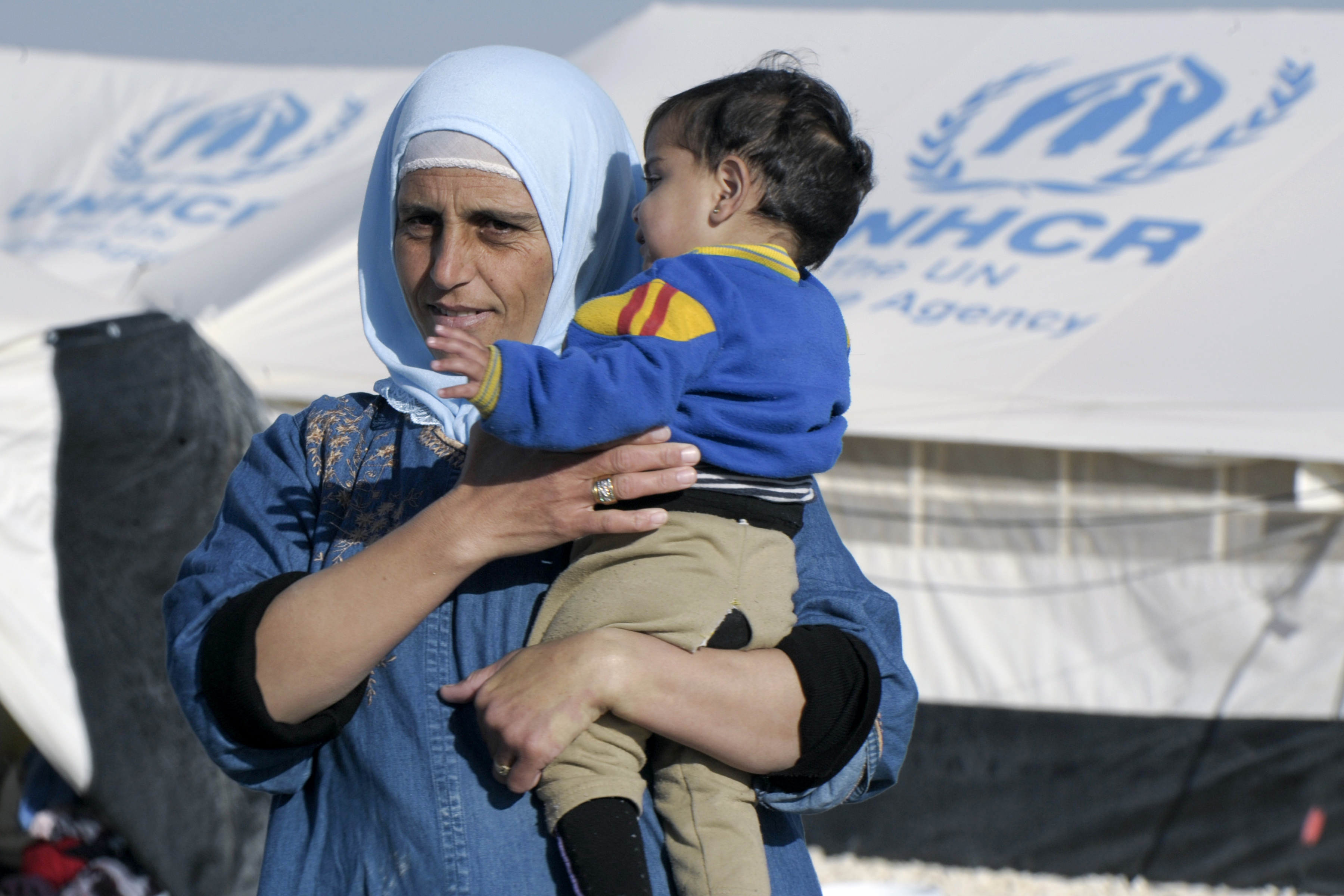 A woman and child at Za’atri refugee camp, host to tens of thousands of Syrians displaced by conflict, near Mafraq, Jordan.  The United Nations recently introduced an innovative iris scan payment system in the camp, allowing 76,000 Syrian refugees to purchase food from camp supermarkets by using a scan of their eyes instead of cash, vouchers or e-cards. UN Photo/Mark Garten 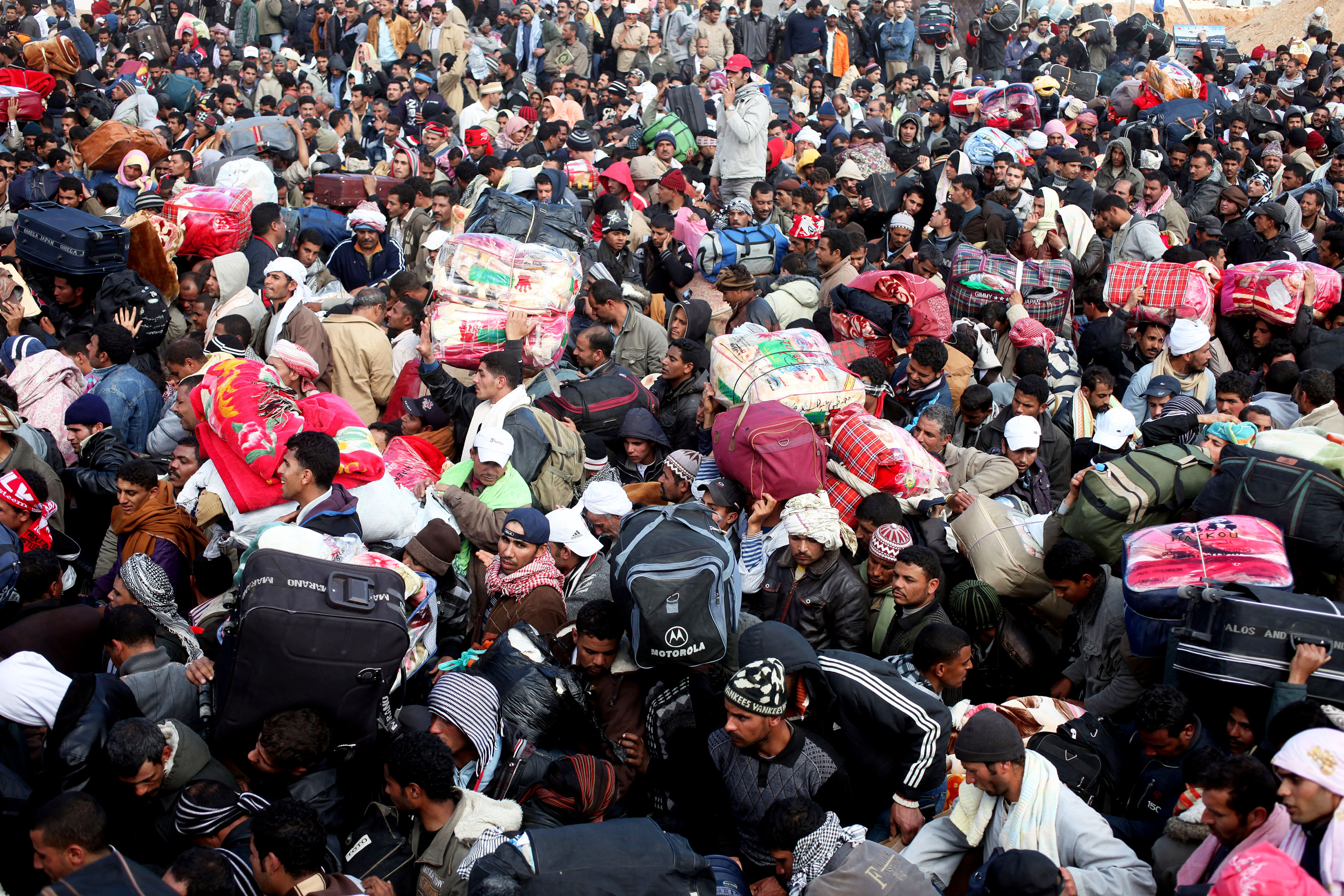 At the Tunisia-Libya border, a heaving crush of thousands of people anxious to leave the insecurity of Libya gathered in a no-man's land on the Libyan side of the border. Most were young men, principally migrant workers from Tunisia and Egypt. They were desperate to go home or find shelter and safety in Tunisia. After several nights sleeping out in the open, many were exhausted and hungry. As the crowd surged towards the border gate, several people were injured. The Tunisian Red Crescent was on hand to provide medical support for all those in need. Officials from the UN High Commission for Refugees (UNHCR) were also waiting on the Tunisian side of the border, supporting the Tunisian authorities and aid organizations. UNHCR/A.Duclos 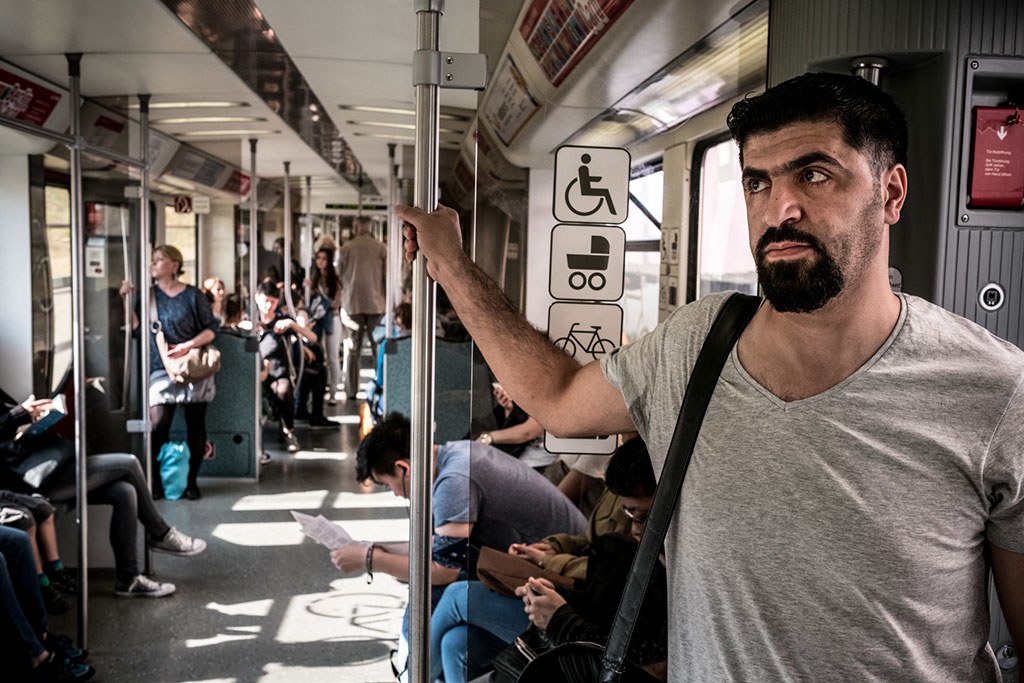 Khaled, from the Raslan family, Syrian refugees from Homs, on his way to German language class in Berlin's Neukolln neighborhood, Germany, on June 2, 2016. Minister for Foreign Affairs of Germany Frank-Walter Steinmeier told the United Nations during the 2016 meeting of the General Assembly that Germany had given shelter to more than one million people and has begun training them to have the skills that one day would enable them to rebuild their cities. “Returning home must not remain a mere dream,” he said, adding that it is important to improve the international architecture for dealing with migrants and refugees. UNICEF/Gilbertson VII Photo 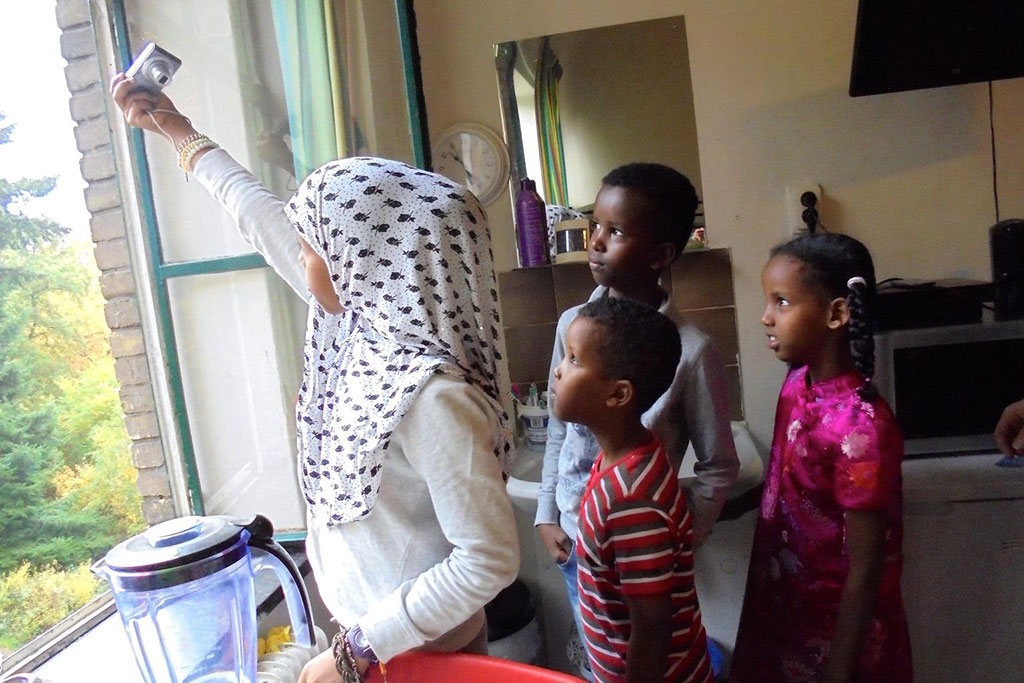 12-year-old Fartuun (left) takes a selfie with her younger brothers and sisters standing behind her, in the Asylum Seeking Center in Sweikhuizen, The Netherlands. The photograph was taken by Siromi, 15, from Sri Lanka. Both girls were participants in an ‘EYE SEE’ photography workshop. Of her photograph, Siromi says: “This is the room of Fartuun and her family in [the] asylum seeking centre in Sweikhuizen. She lives her with her mother, two little brothers and one sister.” Fartuun, who is from Somalia, and Siromi and their families, are seeking asylum in the Netherlands. UNICEF/Siromi

UN News Centre: With so much else happening, have you seen an interest wane or increase since these resolutions were made?

Karen AbuZayd: Well it’s not quite as exciting as those days just before the summit but certainly, we’re still here, a month later, almost, and we’re still working, meeting and speaking, and people are still asking questions and coming forward with ideas about things they can do and that’s very much within the UN.

The UN agencies and departments have a lot of things on their mind that they want to do to contribute, to follow up, and I think I have a number of speaking engagements through 2018 already that people want to continue to hear about this. So, I think there is still some excitement about it or at least some interest in it and I think it has really brought the issues to the world’s interests, despite the very bad political climate for refugees and migrants.

UN News Centre: What are the proposed next steps taking us through to the compact in 2018?

Karen AbuZayd: The UNHCR will be taking charge of the refugee compact because they’re already starting to look at new refugee flows and to look at the protracted refugee situation, which is extremely important, because these have been pretty much neglected for decades, and so this is very good. And they will be developing, in conjunction with the member states, host countries, or resending countries, the compact or provisional compact that will be finalized in 2018. On the migration side we want to have an intergovernmental conference in 2018. So there are the co-facilitators as we call them, the people who will be negotiating how to get there have already been chosen- the two countries that will work together. There are countries that have already offered to have a preparatory conference- Mexico, for example. So there are already steps in place and that will move gradually up until 2018 when the actual compact will be accepted at the intergovernmental conference.

The need for "more equal, more predictable" responsibility sharing amongst the international community for the world's refugees cannot be overemphasised, according to outgoing UN Special Adviser on refugees and migrants, Karen AbuZayd.

UN News Centre: Have you sensed any change in people’s – both the public and from government officials – view towards refugees and migrants?

Karen AbuZayd: I like to think that there certainly is a more positive approach. There are a lot more stories, I’d say, news articles and things dealing with the issue, some even critical of our report in the summit, because they wanted it to be stronger, and we would too, have liked it to be stronger. There were compromises made. We had, for example, that children should be in school within a few days – which is pretty unrealistic – and they said within a few months, “okay good put them in school”. We wanted to say that children should never be in detention; it was that children should seldom if ever be in detention, so that’s not wonderful but it’s better than the way it has been before. The same with many other things; there’s still a lot of discussion going on and I think that is important. I’m briefing some parliamentarians from Norway this week; people are still coming to New York to talk about the summit.

UN News Centre: How will IOM joining the UN system make a difference?

Karen AbuZayd: I think it will improve what we work on together, on migration. The UN has always worked with the various agencies and with IOM over years and this, I think, strengthens the cooperation and makes sure we’re really working together and for them, I think, it is an advantage. They’ll be able to come to our official meetings even out in the field, but also here at Headquarters. I mean we can exchange a lot more information because we’ll be together more often.

UN News Centre: What is the together campaign and what difference can it make?

Karen AbuZayd: We think it could make a big difference especially if we get it out there in the world. You know that that it’s ‘Together, Respect, Safety and Dignity for all’, and these were the words that were in the report that was the basis for the outcome document – the New York declaration. It’s an anti-xenophobia campaign, and the Secretary-General has launched it. So we expect the next Secretary-General to take it forward, and for people to think about this. We have a lot of interest in it, from Ad agencies that want to help us spread it around, from all the UN information centres around the world; they all have plans about taking the message out. So I think it could be quite exciting; a lot of interested persons are working on it.

UN News Centre: What does this declaration mean for the many refugees and immigrants, especially in the developing countries? How should they interpret this?

Karen AbuZayd: Talking particularly about the refugees, the major goal of the conference on the refugee side was to make more equitable responsibility sharing for refugees, because we know that 86 per cent of the world’s refugees are in a few countries; 86 per cent are in 8 countries. The poorest countries often have the most refugees because they are the ones that are neighbouring countries that are in conflict. So if it’s true we’ll get better responsibility sharing – more equal, more predictable – and that countries will really share this responsibility, then everyone should benefit; the refugees should be better off, and the countries that are hosting them should be better off.

The Vision Not Victim (VNV) programme, created by Meredith Hutchison in partnership with the International Rescue Committee, aims to give adolescent girls a chance to develop and explore their aspirations through art. It calls on them to design visions of their futures using photography and other media, which they can use to challenge social norms. VNV engages parents, local leaders and communities to try to change their view of girls, and in turn to create community solutions to combat gender inequality and violence against women and girls. The United Nations Office for the Coordination of Humanitarian Affairs showcased a collection of these photographs in an exhibition on display during the General Assembly's high-level summit to address large movements of refugees and migrants.
♦ Receive daily updates directly in your inbox - Subscribe here to a topic.
♦ Download the UN News app for your iOS or Android devices.
global migration

Members of the United Nations Working Group on Arbitrary Detention completed a two-week visit to the United States today and called upon the Government to abolish its mandatory detention of migrants, particularly asylum-seekers, after it found serious racial and economic disparities and that many people were being held under punitive conditions.