UNHCR/J.Tanner
Young Omar and his parents, who fled the Syrian city of Idlib and crossed into Turkey, have been accepted for resettlement in France.
27 October 2016

The United Nations envoy for education today called for an immediate investigation by the Prosecutor of the International Criminal Court (ICC) into what he called a war crime in Syria – the latest attacks on a school compound in the western province of Idlib that left at least 20 pupils and teachers dead.

“I am calling on the Security Council to immediately agree that the International Criminal Court Prosecutor conduct an investigation into what I believe is a war crime – with the intention that, if proven, the perpetrators will be hunted down and the case against them prosecuted before the [Court],” the UN Special Envoy for Global Education, Gordon Brown, told a press conference at UN Headquarters in New York, where he also announced that the Education Cannot Wait fund is allocating $15 million to children’s education inside Syria.

“The Security Council should meet now,” he said, explaining that the 15-member body faces a chance to unanimously act on Syria because Russia, which vetoed a resolution to refer atrocities in Syria to the ICC in 2014, has expressed support for a probe into the attacks in Idlib.

“Now that Russia, for the first time, has urged such ‘an immediate investigation,’ the Security Council should ask the [ICC] Prosecutor for an investigation into what is happening in Syrian schools and in Syria as a whole,” Mr. Brown said. “Or if they cannot accept this, they should conduct their own investigation as a Security Council as they are entitled to do, and have done so previously in other cases.”

“Article 8, Section 2B of the Rome Statute […] states that ‘For the purposes of this statute, war crimes,’ and what are called ‘serious violations,’ include ‘intentionally directing attacks against buildings dedicated to […] education,’” he explained.Mr. Brown said that the incident that took place in Haas in the western Syrian province of Idlib is the worst assault on school children among 98 separate attacks on Syrian schools in the last two years.

In a statement issued by his spokesman, UN Secretary-General Ban Ki-moon called for immediate and impartial investigation of this and other similar attacks against civilians in Syria.

“If such horrific acts persist despite global outrage, it is largely because their authors, whether in corridors of power or in insurgent redoubts, do not fear justice. They must be proved wrong,” the statement said.

For his part, the Executive Director of the UN Children’s Fund (UNICEF), Anthony Lake, issued a statement, stating that while “we thought we had seen the depths of depravity” after yesterday’s attack: “[But] today’s reports of attacks on schools in Douma and western Aleppo should deepen our disgust and outrage. This brings the toll to five schools hit since October 11.”

Calling such attacks “simply inhuman,” Mr. Lake said: “If the perpetrators cannot find their own sense of humanity, they should heed the condemnation of the world.”

At the press conference Mr. Brown also announced a $42 million investment in the Education Cannot Wait Fund that will secure the future of 1.5 million children caught in the crossfire in war-torn countries, including $15 million for Syria, $15 million for Yemen and $10 million for Chad.

“The $42 million should serve as a signal flare of optimism for those giving the most at this moment of greatest need – like the ‘white helmets,’ the men and women who rush into the rubble and save lives; the brave teachers in Syria’s underground schools ensuring hope is unlocked and potential developed; and those providing psychiatric aid helping children cope with distress,” he said.

According to UNICEF, there are a total of 11 million displaced and at risk boys and girls in the Middle East and North Africa – a figure Mr. Brown sees growing to include many of 600,000 children being forced onto the streets in Iraq’s Mosul.

“While every instance of pain can be countered with a flicker of hope, $42 million is not enough,” he said.

“There are times when history’s moments of great suffering mark turning points that become wellsprings of hope and eventually of pride. I believe we have to create one such moment,” he added.

Mr. Brown also urged the consideration of a new system for financing education in emergencies built on guaranteed funding and a new deal between the UN family, the World Bank Group and aid donors.

“The message has to go out that we cannot begin to achieve our Sustainable Development Goals (SDGs) as long as we condemn refugees and displaced children – those most in need who have received the least – to a future devoid of hope. For children, 2016 has been the year of fear. If 2017 is not to become another year of fear, we must act now,” he said. 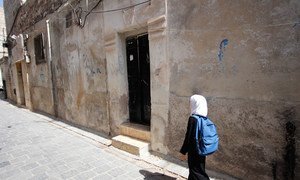 In war-torn Syria, three million children out of school or at risk of dropping out – UNICEF

With the start of the school year and the number of school attacks exceeding 4,000 in war-ravaged Syria, more than 1.7 million children there remain out of school and another 1.3 million are at a risk of dropping out, according to new education data.