Joined by staff and families of the women and men of the United Nations who lost their lives between 1 January 2015 and 30 June 2016, Secretary-General Ban Ki-moon told a memorial service at UN Headquarters today that “those who destroy may think bombs and bullets are the most powerful force […] but nothing is more powerful than the human spirit.”

The annual Memorial Service began five years ago to honour those who have lost their lives while serving the United Nations. Today Mr. Ban paid tribute to Jori De Marco, who was killed while serving as a Security Officer for the Observer Mission in Tajikistan, which operated from 1994 to 2000. The service then offered a minute of silence to those lost.

“Like all of you, I have been deeply affected by the losses of friends and colleagues on the job. In many ways, that feeling never goes away,” said Mr. Ban.

“The men and women we recognize today came from all corners of the world. They served in difficult and dangerous conditions. What drew them together?” he asked.

“Our blue flag and all it represents. There are many flags in the world. But only one represents all of humanity equally. All countries. All faiths. All people. One flag. Others have tried to turn it into a target. But that flag remains a beacon,” he declared.

Mr. Ban has attended staff memorials in many countries. Today’s was an opportunity to speak of the solidarity that the UN represents around the world, and to reassert the Organization’s conviction that working together can heal communities and make the world a better place.

“That is what summons us to work every day,” the Secretary-General said. “And it is that calling for which our colleagues made the ultimate sacrifice.”

♦ Receive daily updates directly in your inbox - Subscribe here to a topic.
♦ Download the UN News app for your iOS or Android devices.
staff

More than 2,700 UN staff sign letter of support for Secretary-General 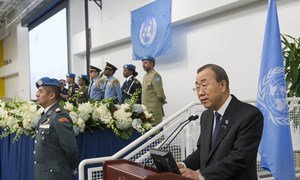 At memorial service, United Nations pays tribute to staff who fell in line of duty

United Nations staff, led by Secretary-General Ban Ki-moon, today paid tribute to colleagues who perished in the line of duty over the past year, at a memorial service at the world body’s headquarters in New York.