OCHA/O.Fagan
A severely malnourished child receives treatment in a clinic in Banki, north-east Nigeria. He is receiving water with sugar and food supplements to increase his body weight.
26 October 2016

In a news release issued by the UN Office for the Coordination of Humanitarian Affairs (OCHA), wrapping up his first few weeks in the position, Mr. Lundberg assured the Nigerian Government of the international community’s commitment to working closely with federal and state mechanisms to accelerate a collective response to the situation.

He also welcomed the recent announcement of the of the Inter-Ministerial Task Force and High Level Humanitarian Coordination Group, and the Borno state Humanitarian Response Committee and looked forward to seeing “tangible impact in the coming weeks and months.”

According to Mr. Lundberg, humanitarian assistance by the Government and the aid community is being provided to the millions of people in desperate need despite insecurity and access constraints. However, relief agencies should continue to maintain neutrality, impartiality and independence and continue to work where security permits. “Needs are currently higher than the response capacity and we must ensure that we have both access and resources to scale up our humanitarian support in the months to come.”

Despite some very generous contributions from mechanisms such as the UN Central Emergency Response Fund (CERF) and donations from the wider donor community, the Nigerian Humanitarian Response Plan for 2016, which requires $484 million for life-saving interventions, has only received one third of the needed funding. “Without the means to respond, innocent boys, girls, women and men will die. The highest priority requirement for this response remains food security which is just 25 per cent funded,” warned Mr. Lundberg.

He went on to note that the attacks on the humanitarian convoy on 28 July and recent suicide bombing in Maiduguri on 12 October serve as stark reminders “that we must not let down our guard in such a high risk environment.” Indeed, the security of humanitarian actors remains a top priority for the humanitarian community, he added.

At the end of his statement, Mr. Lundberg affirmed OCHA’s commitment to support and assist international organizations with the structures and mechanisms they require to safely carry out their work. He also noted the recent improvements in displaced populations’ assessment, calling this development a “springboard’ that will improve access to affected populations. 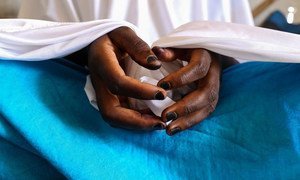 After more than two years of being held hostage by Boko Haram insurgents in north-east Nigeria, the 21 recently-released Chibok school girls have finally been reunited with their families, however, their return emphasizes the necessity of urgent and intensive psychosocial care, according to the United Nations Children’s Fund (UNICEF).