‘We have to do the right thing,’ deputy UN chief says on intensified response to cholera outbreak in Haiti

Deputy Secretary-General Jan Eliasson today urged the international community to show solidarity with the Haitian people as they struggle to cope with the impact of Hurricane Matthew and an ongoing cholera epidemic, particularly through financial support for the new United Nations system-wide approach to tackle the spread of the disease.

In an interview today with the UN News Service, Mr. Eliasson shared the UN’s progress on the response to cholera in Haiti, noting improvements that he said reflected profound commitment and devotion from the response team, and which he hoped would create a sense of solidarity for the people of Haiti.

Recently at UN Headquarters in New York, Mr. Eliasson briefed Member States on the Organization’s intensified response, saying the first track of the new UN approach to tackling cholera involves stepping up efforts to treat and eliminate the disease; and the second track aims to develop a framework proposal to Member States for material assistance to those Haitians most affected by cholera after the 2010 outbreak.

Shortly after that briefing, the United Nations announced the launch of the UN Haiti Cholera Response Multi-Partner Trust Fund (MPTF) to generate and manage resources to support the coordinated system-wide response and support the establishment of strong water, sanitation and health systems in the country.

In his interview today, Mr. Eliasson explained that the first track will cost about $200 million. The second, a support package to reach those immediately affected, which involves looking back and reaching out to specific communities and individuals, would entail an additional $200 million. Together, the $400 million package would be implemented over the course of two years in consultation with the Government and people of Haiti as well as other stakeholders.

“I am of the view that you can combine a firm legal position with compassion and practical demonstration of solidarity with the Haitian people. The United Nations is, after all, about solidarity with those in need,” said the Deputy Secretary-General.

Delivery of cholera kits in Les Cayes, Haiti, after the area was ravaged by Hurricane Matthew. Photo: PAHO/WHO

He spoke of an approach that would simultaneously “do the right thing” for the Haitian people and the reputation of the United Nations, which remains committed to eliminating cholera in the country. He also stressed that a “third track” of the overall package could be considered, as it contains “very important action right now to help the Haitian people with the horrific effects of the monster hurricane,” Matthew, which tore through the tiny island nation when it made landfall on 4 October, ultimately impacting some 2.1 million people.

Thus far only 27 per cent of the emergency appeal launched by the UN humanitarian wing has been secured thus far, a fact that Mr. Eliasson called “disappointing.”

Funding support from the international community is “absolutely crucial.” He explained that “for the credibility of the [wider] initiative, we are relying on a positive reaction from Member States [and that they will] also feel the need to show solidarity with the Haitians.”

In response to a question over whether UN staff have been ill-at-ease over the handling of the matter, Mr. Eliasson said that Secretary-General Ban Ki-moon has expressed deep regret over the lack of success so far with regards to the cholera outbreak in Haiti. He acknowledged that many people at the UN shared similar concerns, but that they were “relieved that we are trying now very honestly and strongly to take this step.”

The Deputy Secretary-General promised accountability and efficiency of the programmes going forward and shared that though pledges were yet to be made by Member States [for the intensified cholera response], six or seven had put forth a positive reaction already. He also praised a committed team, including Dr. David Nabarro, Special Adviser and medical doctor whose contributions had been invaluable during the Ebola crisis, and legal expert Linda Taylor, who is the Executive Director of the United Nations Office of Administration of Justice (OAJ).

“We have a great team working on [the response] right now, very committed and very devoted, and I have rarely felt higher morale among colleagues,” he said. “The people working on it are there day and night, and I get constant feedback. I hope we will be able to have a good message coming through to the General Assembly and that we will show the Haitians that we will be there at their side,” he added, regarding a proposed meeting of the 193-member body on Haiti.

The Deputy Secretary-General said that yesterday, 500,000 vaccines were expected to arrive in Haiti, and that another round would arrive soon, for a total of one million. Thanks to the UN Central Emergency Response Fund (CERF), the UN will be able to increase the number of response teams in addition to the 62 that are already in areas of urgent treatment need.

“Then, we need to start to work very energetically in the sanitation sector,” Mr. Eliasson urged. “Only half of the Haitians have safe water and a quarter has [adequate] sanitation. So half of the people have no fresh water to drink,” he added.

The Deputy Secretary-General expressed a hope that the efforts under way by the UN would carry the right message to the people of Haiti and to Member States, as well as to the public at-large. He cited a sense of urgency to do as much as possible before the end of his and Mr. Ban’s term, (31 December) and acknowledged that the work would certainly continue over the next few years under António Guterres’ direction, as the new Secretary-General.

Also at Headquarters today, the Special Rapporteur on extreme poverty and human rights, Philip Alston, told the General Assembly that while the UN has for the past six years ignored claims by victims for a remedy, focusing exclusively on measures to contain the outbreak, “the good news” is that, under Mr. Eliasson’s “courageous leadership,” the UN recently set up the MPTF to greatly enhance its cholera eradication efforts and to assist victims of the disease.“The bad news is that the UN has still not admitted factual or legal responsibility, and has not offered a legal settlement as required by international law,” said the independent human rights expert, briefing the Assembly’s main body dealing with human rights issues (Third Committee) on his latest report.

Special Rapporteurs and Independent Experts and are appointed by the Geneva-based UN Human Rights Council to examine and report back on a specific human rights theme or a country situation. The positions are honorary and the experts are not UN staff, nor are they paid for their work. 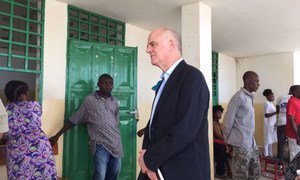 Hurricane Matthew, which ripped through Haiti 13 days ago, has left more than 700,000 people in an “extremely difficult situation,” United Nations Special Adviser David Nabarro said today, and while steady progress is being made, led by Haitians themselves, the response must be accelerated as the needs are still great, frustrations are high, and access to hard-hit areas remains tough.