Members of the United Nations Working Group on Arbitrary Detention completed a two-week visit to the United States today and called upon the Government to abolish its mandatory detention of migrants, particularly asylum-seekers, after it found serious racial and economic disparities and that many people were being held under punitive conditions.

Members of the Working Group included Seong-Phil Hong, Jose Guevara, and Leigh Toomey, who were accompanied by two members from the Working Group’s Secretariat of the Office of the UN High Commissioner for Human Rights in Geneva.

The Group conducted its visit from 11 to 24 October, during which time they met with officials from the US Department of State, the Office of the Special Envoy on Guantánamo Closure, the Departments of Homeland Security and Justice, the Bureau of Prisons, Health and Human Services, and authorities in Texas, California, and Illinois.

It extended its gratitude to the US Government for the invitation, while also expressing regret that the group’s requests to visit San Ysidro – a major point of entry for immigration in California – and the Homan Square policy facility in Chicago – which has received serious allegations of arbitrary detention and torture – were denied.

“People are being detained under punitive conditions that are often indistinguishable from those applicable to persons subject to criminal punishment,” the panel said in a press release.

Their findings stated that “detention for immigration purposes should be the exception rather than the rule. It should be utilized only where strictly necessary after an individualized assessment of the necessity of detention in each case, to prevent flight risk or danger to the community, or to execute a final order of removal after a full hearing in which due process is guaranteed.”

Sometimes families are separated, something that the panel urged the Government to address through alternative methods to detention, especially with regards to unaccompanied children.

Other considerations by the Working Group included the deprivation of liberties in the context of criminal justice, health, and Guantánamo Bay. They urged the US Government to improve legal access in both criminal justice and immigration contexts in order to secure legal representation for all.

To determine whether deprivation of liberty is arbitrary, the Working Group considered the following:

With regards to its findings on health, the Working Group said: “The necessity of continued hospitalization must be reviewed regularly at reasonable intervals by a court or a competent independent body. The person must be released if the grounds for hospitalization no longer exist.” They also stressed that involuntary treatment or confinement be used only as a last resort for pregnant women suspected of substance abuse – that is, when a woman poses an immediate threat to herself or to others, and only for the shortest possible period of time, with appropriate due process guarantees so as not to jeopardize her liberty.

There has been a significant uptick in the number of people imprisoned with mental health issues and the Working Group recommended that the Government develop specific sets of pre-arrest and pre-trial intervention programmes in order to avoid incarcerating those in need of mental health treatment.

The Working Group also urged the Government to accelerate its closure of Guantánamo Bay, the detention facility that uses prolonged and indefinite pre-trial detention. It also encouraged the U.S. Congress to lift the ban on transfers of Guantánamo Bay detainees to the US.

The Group will present its final report to the UN Human Rights Council in September 2017.

♦ Receive daily updates directly in your inbox - Subscribe here to a topic.
♦ Download the UN News app for your iOS or Android devices.
detention 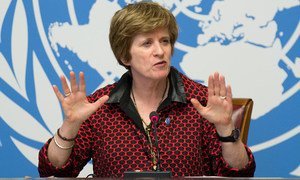