“There is clear evidence that racial profiling is endemic in the strategies and practices used by law enforcement,” said Ricardo Sunga, who currently heads the UN Working Group of Experts on People of African Descent, in a news release issued following its official visit to the country. “Arbitrary use of ‘carding’ or street checks disproportionately affects people of African descent,” he added.

“We urge the Government to develop and implement an African Canadian justice strategy to address the anti-Black racism and discrimination within the criminal justice system,” Mr. Sunga stated.

From 17 to 21 October, a delegation of the Working Group visited Ottawa, Toronto, Halifax and Montreal to gain first-hand knowledge on racial discrimination, Afrophobia, xenophobia, and related intolerance affecting African-Canadians.

“In our conversation with African Canadians, we found that Canada’s history of enslavement, racial segregation, and marginalization, has had a deleterious impact on people of African descent which must be addressed in partnership with African Canadian communities,” Mr. Sunga stressed.

“We welcome, among other measures, the recent establishment of the Anti-Racism Directorate to address systemic racism and promote fair practices and policies across Ontario province,” Mr. Sunga said.

The Working Group will present a report containing its findings and recommendations to the UN Human Rights Council in September 2017. 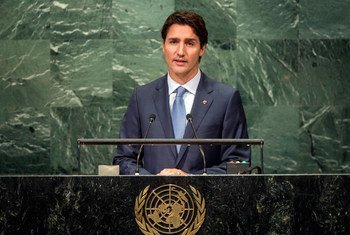 20 September 2016
Addressing the United Nations General Assembly for the first time, Justin Trudeau, the Prime Minister of Canada, said leaders and politicians should see diversity as strength rather weakness and, instead of exploiting fears, work to allay them by enabling a safer, more peaceful world for all.