With the military offensive still unfolding in Mosul, the Office of the United Nations High Commissioner for Refugees (UNHCR) and the UN Children's Fund (UNICEF) are rushing to provide shelter, drinking water, and sanitation services for displaced families and children.

“Our focus remains on the intensive and continuing push for more protection and shelter support,” Adrian Edwards, a UNHCR spokesperson, told today’s press briefing in Geneva.

The agency UNHCR reports modest levels of displacement, with 3,900 people displaced and transported to a nearby reception centre in the village of Al-Hood to receive assistance. Additional 240 people were transferred from Makhmur district to a reception centre (Debaga) yesterday.

According to UNHCR, additional five camps were established to shelter 45,000 people, with 11 camps planned. The agency will be able to provide shelter support for 600,000 people.

In Mosul, UNHCR will soon be ready to send support and emergency assistance to 15,000 individuals, with hopes to eventually accommodate 50,000. In addition, UNHCR has partnered with other UN agencies as well as non-governmental organizations (NGOs) to ensure that proper sanitation, sufficient water supply, health and protections services are available to the people at Al Hol.

The agency was able to reach 48 per cent of its budget goal, stressing that there is still a huge need for further funding, especially when the winter is around the corner, said Mr. Edwards.

Meanwhile, UNICEF is delivering clean water to thousands of families caught up in the conflict in Al Houd, a town south of Mosul that was earlier retaken by Iraqi security forces.

The UNICEF Country Representative in Iraq stated that the agency has helped 3,000 children and their families who suffered the consequences of Iraqi conflict. “It may seem a small achievement, but it is one that will bring a week of respite for the children and families who have already suffered so much,” he said. “A lot of children are in a state of shock, all they need now is a safe space to play, learn and aspire,” said UNICEF’s Peter Hawkins.

UNICEF stresses that the displaced and needed families require clean water and sanitation services; they deserve to feel safe and receive basic humanitarian assistance. Many children and families have already gotten sick from drinking unclean water.

Therefore, UNICEF has been providing water and sanitation services, while also having emergency vaccination and psycho-social teams on standby to assist children and families in need.

Despite delivering enough bottled water for 1,500 families for a week, including hygiene kits with buckets, soap and detergent, the organizations has also committed to bringing fresh water every week to people in need. 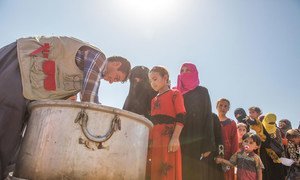 United Nations humanitarian agencies operating in Iraq are bracing for what could be a displacement catastrophe requiring the largest and most complex global response in 2016, in the wake of the military offensive under way to oust terrorists from Mosul, the country’s second-largest city.