INTERVIEW: Search for truth, reparation and transitional justice are important elements for achieving peace and reconciliation – UN envoy for Colombia

There have been various recent steps in the peace process, which involved long-running talks between the Government of Colombia and the Revolutionary Armed Forces of Colombia-People's Army (FARC-EP) in the Cuban capital of Havana, and the achievement of a ceasefire agreement in June, followed by a peace agreement in August. That peace agreement was signed, amid much fanfare, in the Colombian city of Cartagena in September – however, a subsequent referendum on the agreement, in October, led to its rejection by Colombian voters.

In the aftermath of the referendum result, the Government and the FARC-EP asked the Secretary General and the Security Council to allow the UN Mission to verify the parties’ compliance with the ceasefire, in accordance with a jointly-agreed protocol on 13 October. Also, the Secretary-General instructed Mr. Arnault to continue his consultations with the parties.

The UN News Centre spoke with Mr. Arnault after his Council briefing.

Jean Arnault: The most important thing was the strong support that was shown there. I think that, after the referendum, there has been an element of uncertainty and I think it might have been logical that the Council’s members react to this uncertainty with their own uncertainty. But it wasn't like that, it was the opposite. There was unanimity in the Council once again on the issue of Colombia. I think it's a very helpful message for us – as the UN Mission in Colombia – but it’s also a very helpful and encouraging message for Colombians.

UN News Centre: What are the next steps – will the Mission adjust in some way its mandate?

Jean Arnault: The Mission’s configuration doesn’t change much. I’ll remind you that the initial mandate of the Mission was centred on the verification of the ceasefire and the verification of the laying down of arms. Obviously, after the events of 2 October [the result of the referendum], the laying down of arms has been postponed until a new agreement is reached. Instead, there is a strong commitment from both parties to the ceasefire and that’s what we’ll work on. The concept of a ceasefire now is a bit different from the concept that had been approved a couple of months ago but, in the end, deals with a classic process of separation of forces, with the guerrillas concentrating their forces in about 50 or 60 locations, the army redeploying its forces and the UN Mission cooperating with the two sides, monitoring the separation of forces. So I'm sure that it won’t be necessary to have any big changes in the Mission’s composition nor in the number of observers.

UN News Centre: From your encounters, what’s the feeling been among Colombians in relation to the referendum’s result and this recent announcement of negotiations with the ELN?

Jean Arnault: What’s remarkable was that, following the referendum, to find on 3 October a very strong consensus – regardless of who abstained, who voted yes, who voted no – and that consensus referred to two things: one is that Colombians do not want a return to war, do not want more violence, and the result of the referendum generated that concern that the conflict could resume. The response to this concern was: "we do not want a return to war." The second thing is the firm demand for a return to negotiations and for an amended agreement to be concluded, representing the views of those who disagreed – a quick agreement. There's a desire for the ceasefire to also close the chapter on war, and for it to close with a good deal, the widest deal possible. 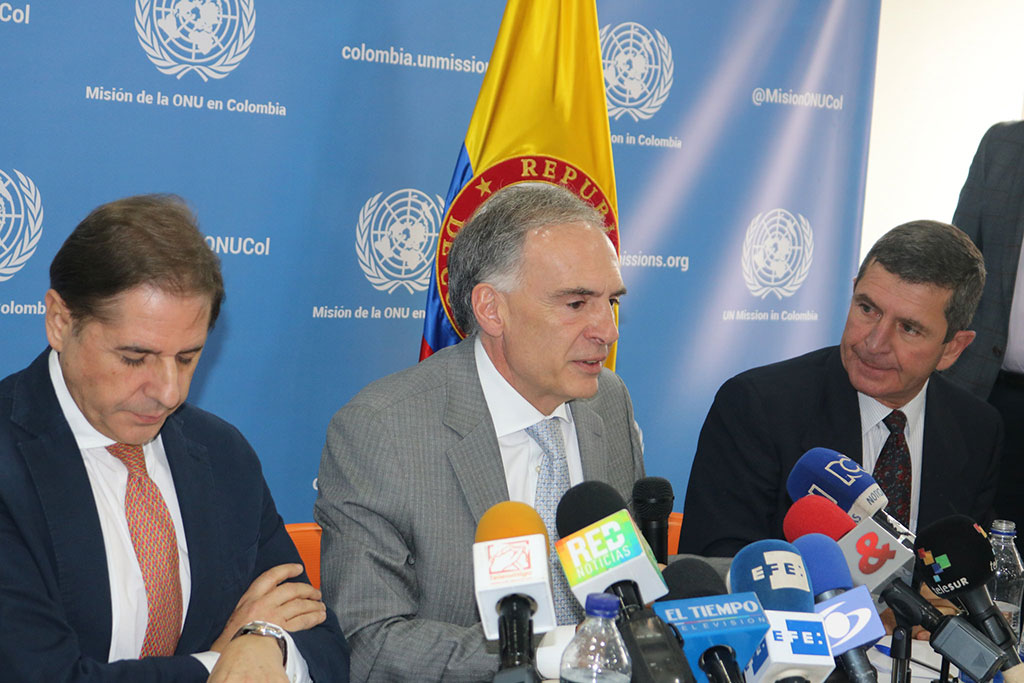 Martin Santiago Resident Coordinator of the system of the United Nations in Colombia; Jean Arnault Special Representative of the Secretary-General and chief un political mission in Colombia and General Pérez Aquino, Chief civilian component international observers of the UN Mission in Colombia. 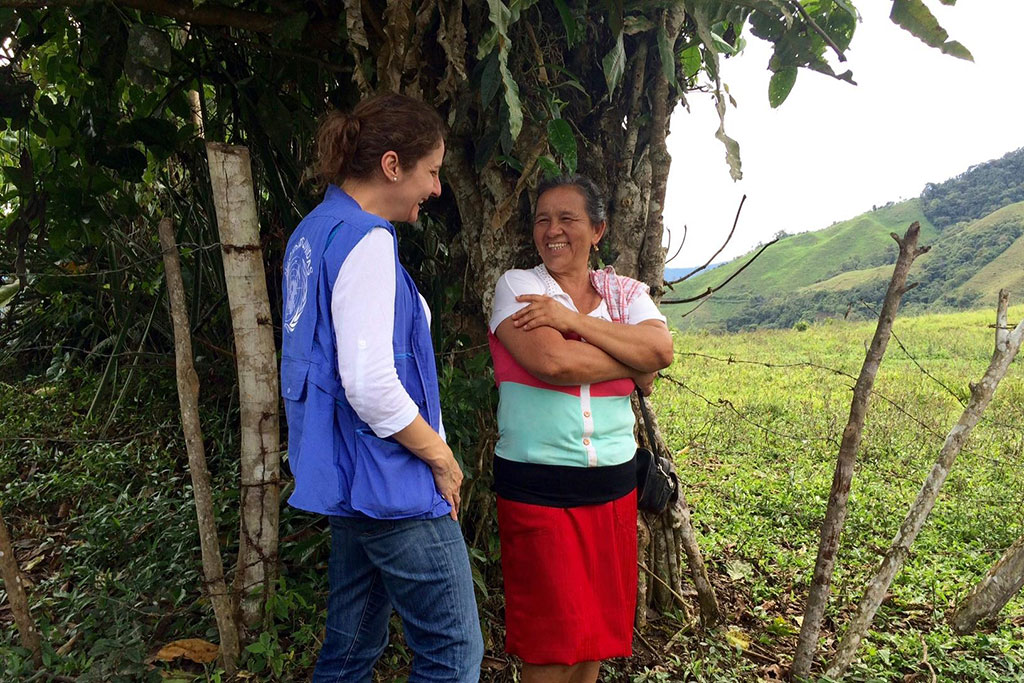 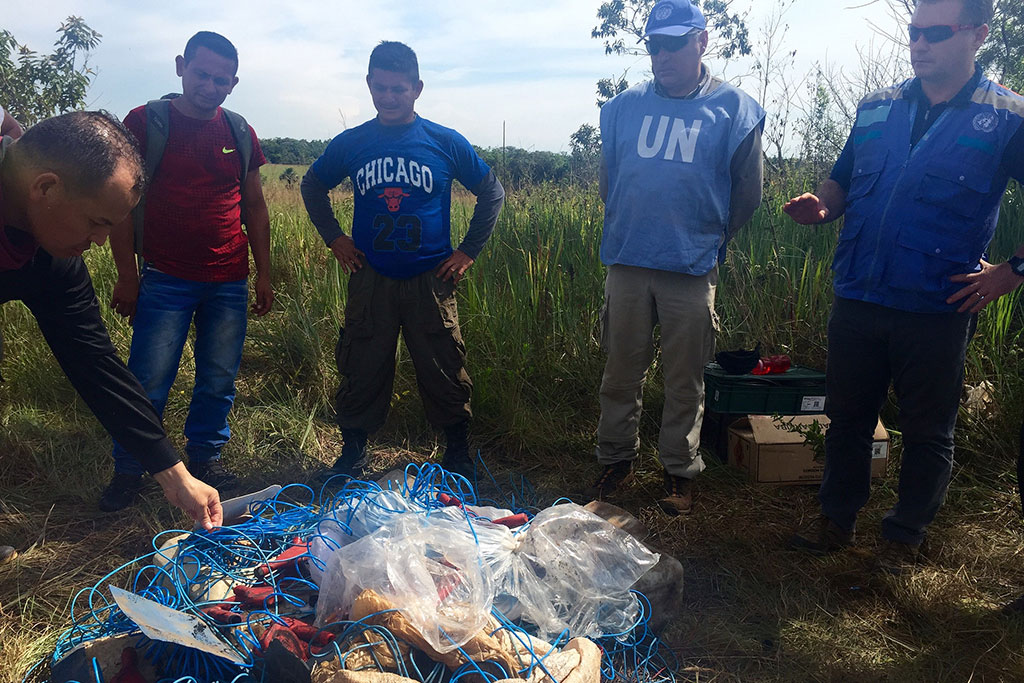 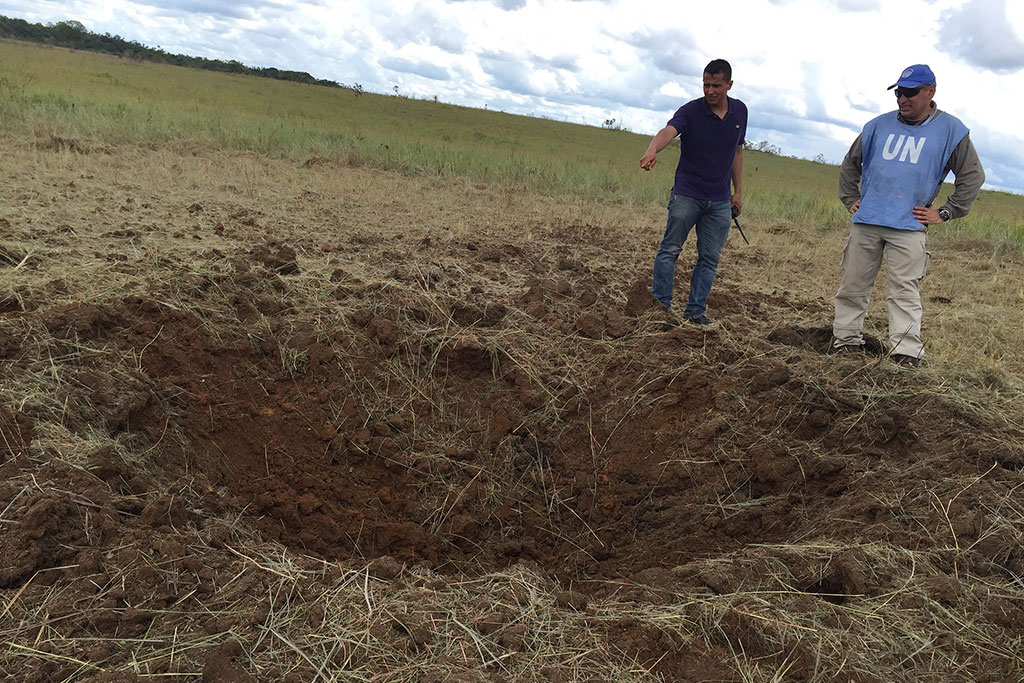 UN News Centre: The main point of disagreement that influenced the referendum’s outcome was that of the administration of justice. How can that disagreement be overcome in order to create consensus?

Jean Arnault: Everyone knows that the issue of tensions between the desire for peace and justice isn't limited to Colombia, rather, it’s one that’s there in all the [peace] processes we have known. I don’t think there’s a process in which we, the United Nations, have been involved and which hasn’t involved the challenge of combining the demands of peace and justice. The Colombian process is trying something relatively new with an emphasis on restorative justice. It’s not surprising that there are people who don’t agree with this position, this commitment to restorative justice, who think that justice should be penal in nature, much more in line with usual justice processes. I think what Colombian society is doing with its transitional justice process is an experiment worth implementing, but I also respect the position of those who disagree.

Personally, I think there is no possible substitute for national reconciliation. I’m convinced that the search for truth, reparation for victims and transitional justice are all very important elements for achieving reconciliation for peace and justice. I’m also convinced that national reconciliation will not come easily, that it requires the efforts of victims, perpetrators and society as a whole to seek a path of national unity towards peace. And I conclude by saying that I think it’s very impressive what we have seen in Colombia this past year. There have been many meetings in Havana between victims and perpetrators, there have been many other meetings across the country and I think there’s a movement emerging in Colombia for reconciliation that seems very encouraging – not only for Colombia, but as an example that others can take in peace processes.

UN News Centre: What are the next steps for the UN Mission in Colombia?

I don’t think there’s a process in which we, the United Nations, have been involved and which hasn’t involved the challenge of combining the demands of peace and justice.

Jean Arnault: Well the next step is really to get a green light, from the Security Council, to respond positively to a request that we received a couple of weeks ago from the government of Colombia and the FARC (Revolutionary Armed Forces of Colombia-People’s Army) to verify a cease-fire that they entered into, back on 29 August. They have modified the concept slightly. But they’re very keen that it should now be formally verified by the United Nations, and we are very confident that the Security Council will give us their authorization to start verifying the cease-fire as soon as possible.

UN News Centre: And what does this national consensus around this cease-fire mean for the UN Mission?

Jean Arnault: Well, it’s of course very good news. It is one thing to have a cease-fire that has been decided on by the two belligerents – in this case by the state and the army of Colombia, and the FARC – while it’s another thing, obviously, to have a ceasefire that is strongly supported by the population at large. And it was one of the happy developments following the plebiscite of 2 October that this popular support for the ceasefire; this concern not to return to war in spite of the plebiscite was expressed most clearly. So we feel that we will soon have a mandate, but we also feel that we already have a popular mandate to start verification as soon as possible.

In an interview with the UN News Centre, the UN envoy for Colombia, Jean Arnault has highlighted the critical importance of preserving hope for "negotiated ends to armed conflict."

UN News Centre: And how can the international community support the peace process at this point?

UN News Centre: Do you think it’s very difficult to build this consensus after the result of the plebiscite?

Jean Arnault: Yes, I think it will not be easy, obviously. As you know, the plebiscite has shown that, to some extent at least, the population was divided; it was actually split down the middle – fifty-plus versus forty-nine-plus. And it’s always difficult, when you have a situation of clear division, to overcome the perceptions on one side or another. But so far I think that our own analysis is that the Colombian society has responded well. Immediately after the plebiscite, the government and the FARC announced their decision and their determination to keep the ceasefire, and simultaneously, they both agreed that they wanted to recognize the outcome of the plebiscite and invite the opposition to a dialogue, which started actually on Monday 3 October. And I think the opposition has also been responsible. Because for the most part, no one - actually all of the opposition has agreed to enter into dialogue with the government. So the past couple of weeks have been really two weeks of searching for political solutions. Now of course there are differences in view between the yes camp and the no camp; there are differences within the no camp, and I have no doubt that reaching an agreement quickly will not be easy. But I think – again, to talk about mandate – I think the political parties, the leadership of that country has a popular mandate to reach an agreement and to reach it as quickly as possible, and also to try to make it a national compact, so that all those sensitivities that have been revealed by the plebiscite are properly represented in the future agreement.

Building peace, one project at a time in Colombia

Welcoming the announcement that formal negotiations between the Government of Colombia and the National Liberation Army (ELN) will begin later this month, United Nations Secretary-General Ban Ki-moon today expressed hope that the two sides will reach a sustainable peace agreement as soon as possible.