OCHA Afghanistan
The Bish-Bator compound in Afghanistan where around 650 conflict-displaced families live.
20 October 2016

The United Nations Special Rapporteur on the Human Rights of Internally Displaced Persons (IDPs) today urged the Government of Afghanistan and the international community to strengthen efforts and collaboration in order to support the increasing number of people who are leaving their homes due to a deteriorating security situation within the country.

Wrapping up a 10-day visit to the crisis-torn country, Chaloka Beyani, said that he met with numerous IDPs to discuss their situations, challenges, and hopes.

“Warnings by humanitarian partners suggest that many more IDPs could be displaced by the end of the year, yet attention and resources allocated to their needs seem to be waning rather than increasing in line with the growing challenges and need for durable solutions,” he said.

In addition to this lack of support, the ongoing conflict means that many IDPs throughout the country have chosen not to return home and that families are resorting to coping mechanisms like child labour, early marriage for girls, and other forms of exploitation.

Mr. Beyani noted that more than 323,000 Afghans have been displaced since the start of 2016. That is in addition to the more than 800,000 Afghans – both documented refugees and undocumented deportees – who have returned from Pakistan and Iran this year. Because IDPs tend to go to areas where they have family ties or connections, the Special Rapporteur urged a community-based approach to handle displacement.

He also expressed a concern for the need for clear leadership and accountability in order to avoid political interference in the assessment and distribution of humanitarian assistance and to confront the lack of measures that take gender-based differences into account.The situation has left many women as heads of households, yet they cannot adequately support their families due to discriminatory laws that prevent them from owning land or property. The Special Rapporteur reported that the women he met expressed a desire for skills training which would allow them to contribute to family income.

Priorities for those displaced include better housing, education for children, healthcare access, water and sanitation, access to livelihoods, and expert services for pregnant women. As winter approaches, safeguards against harsh conditions will be increasingly necessary.

“In September 2016, the UN issued a Flash Appeal for $150 million to meet urgent needs, including winter assistance packages, by the end of the year. I urge the donor community to respond generously and rapidly to that call,” said Mr. Beyani.

A further obstacle for many IDPs is that they do not have national identification cards (“tazkira”), which limits their access to social services, justice, and education for their children, a particularly troubling problem given that 56 percent of IDPs are children who are increasingly working to support their impoverished families.

While the Special Rapporteur praised the Afghan Government for its political will in addressing the IDP crisis, he remained concerned that the National IDP policy had yet to be implemented, in part because the national institutions responsible for responding do not have the resources or capacity to fulfil their obligations.

The Special Rapporteur will develop a country visit report that he will then present to the Government of Afghanistan and the United Nations Human Rights Council at its 35th Session in June of next year. 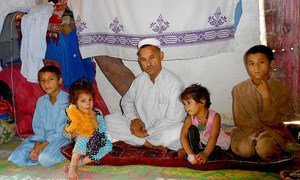