UN Photo/Eskinder Debebe
Secretary-General Ban Ki-moon (centre) visits a temporary shelter for victims of Hurricane Matthew in Les Cayes, Haiti, during a trip on 15 October 2016 to meet with communities, Government officials, and humanitarians working in the country.
20 October 2016

Briefing the United Nations General Assembly on the humanitarian situation in Haiti following the devastation caused by Hurricane Matthew, Secretary-General Ban Ki-moon underlined the urgency of additional resources to help respond to the dire needs on the island.

“People who before had little, now have nothing. No homes. No crops. No livestock and no livelihoods,” Mr. Ban told an informal meeting of the General Assembly today.

“Access to the hardest hit areas is difficult. People are in desperate need of food, water and shelter,” he added, recalling his visit to Les Cayes, one of the most-affected areas, along with Jérémie, in the south-west of the country, where the hurricane made landfallon 4 October.

Barely a week after the storm, on 10 October, the UN launched a nearly $120 million “flash appeal” to fund its humanitarian response in the aftermath of the disaster. A large part of the request ($56 million) focused on providing emergency food, nutrition and agriculture to the people of Haiti. Other sectors in the appeal included water and sanitation, emergency shelter and non-food items, health, protection, logistics and communication, early recovery and livelihoods, education, and coordination.

However, 10 days since its launch, the appeal is only 22 per cent funded, said Mr. Ban.

The UN chief stressed that funding is required to step-up response in the fight against cholera on the island. Efforts to address this water-borne disease were also severely affected after Hurricane Matthew hit.

“Last Friday, Deputy Secretary-General Jan Eliasson briefed the Member States on our efforts,” Mr. Ban reminded delegations today, informing them that the Organization is also developing a proposal to bring assistance to those most directly affected by cholera and that he would present this plan to the Assembly in due course.

Appealing to all Member States to respond with financial support needed on both these tracks to ensure success, the Secretary-General emphasized: “We must fulfil our moral duty to the people of Haiti.” 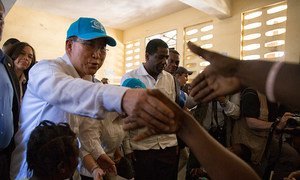