In her first information-gathering visit to Sri Lanka, Rita Izsák-Ndiaye, the United Nations Special Rapporteur on minority issues, stressed the importance of renewed support for minority rights by the Government, including a plan for specific and urgent measures.

“In order to achieve peaceful co-existence after the long devastating civil war, a comprehensive, well-planned and well-coordinated truth, reconciliation, healing and accountability process must take place, and it cannot be done overnight,” Ms. Izsák-Ndiaye said in a news release issued at the end of her trip.

She also encouraged the Government to take urgent measures to demonstrate its commitment to protect “the dignity, identity, equality and right to participation in all walks of life, of Sri Lanka’s minorities.”

During her visit, Ms. Izsák-Ndiaye spoke to many minorities across the country, including Muslims, Hindus, Christians, Sri Lankan and Up-Country Tamils, Malays, Veddas, and Burghers, stressing that “challenges remain,” when referring to ongoing and urgent issues within Tamil and Muslim communities, such as return of occupied land, missing persons, demilitarization, and release of security-related detainees.

Among other challenges, the expert noted poverty, violence and discrimination against women, including in personal laws, and caste-based discrimination, and added that that the country lacks representative institutions in accessing public services, and an inclusive justice system.

At the same time, she praised the National Unity Government for its crucial efforts to adopt critical laws and provide better protection for minority rights, while also noting that “efforts by the Government to implement good and inclusive governance must include guarantees that minorities become part of decision-making processes and have a place in state- and provincial administration. Consultations with minority groups on issues affecting them should be regular, institutionalized and systematized.”

In Ms. Izsák-Ndiaye’s opinion, the lives of minorities could be improved by incorporating teaching about diversity as a source of strength, into Sri Lanka’s educational curriculum.

The UN Special Rapporteur also stressed the importance of forming a bridge between minority communities and the state, which can be done by creating an independent minority rights body, and providing expertise on policy-making process.

According to the expert, the critical moment for the rights of minorities is embodied in the Constitutional reform process, which minorities see as a path to finally obtain their rights. “Minority NGOs and communities have given their voices to the constitutional consultation process with their numerous submissions,” Ms. Izsák-Ndiaye stated. “Their views and aspirations must be taken into proper consideration.”

Special Rapporteurs and Independent Experts are appointed by the UN Human Rights Council to examine and report back on a country situation or a specific human rights theme. The positions are honorary and the experts are not UN staff, nor are they paid for their work.

A detailed report will be presented to the Council by Ms. Izsák-Ndiaye in March 2017. 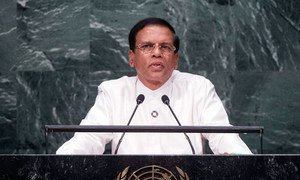 Outlining steps towards reconciliation, democracy and alleviation of poverty, President of Sri Lanka expressed his commitment to take necessary action in order to achieve long-term peace and sustainable development, including protecting the environment.