MONUSCO/Theophane Kinda
African Union facilitator Edem Kodjo (left) addresses the meeting of the preparatory committee to the national dialogue in the Democratic Repiblic of the Congo (DRC).
19 October 2016

Taking note of the wrap-up of the African-Union mediated national dialogue in the Democratic Republic of the Congo (DRC), United Nations Secretary-General Ban Ki-moon today urged the Government to remain actively engage with all political stakeholders, and called on political actors not involved in the talks to resolve their difference peacefully.

“[The Secretary-General] commends Edem Kodjo, the African Union Facilitator for the dialogue, as well as participants to the talks for their work and commitment towards a peaceful solution to the crisis in the context of the electoral process,” said a statement issued by Mr. Ban’s spokesperson.

According to media reports, the negotiators reached a decision on the holding of elections in 2018.

The statement went on to say the UN chief hopes that the implementation of the agreement will contribute to a more conducive climate for the respect of fundamental rights and freedoms essential to political debate and credible elections.

“He urges the Government to remain actively engaged with all political stakeholders, including through continued confidence-building measures,” including, in particular, the further release of political prisoners and respect for the right to peaceful assembly and freedom of expression, the statement said.

Mr. Ban went on to call on political groups who were not part of the national dialogue to seek to resolve their differences peacefully.

“The Secretary-General reiterates the crucial importance of peaceful and credible elections for the stabilization and consolidation of constitutional democracy in the DRC, in keeping with the Constitution and the African Charter on Democracy, Elections and Governance,” the statement concluded.

Last week, in a briefing to the UN Security Council, Maman Sidikou, the Special Representative of the Secretary-General and Head of the UN Organization Stabilization Mission in the country, known by the French acronym MONUSCO, expressed deep concern about the impasse in the electoral process and rising political tensions there. He underlined the primary responsibility of the Government and all stakeholders “to preserve the hard-won gains made in recent years.” 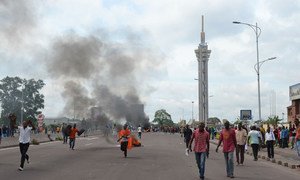 Warning of an extremely fragile political situation in the Democratic Republic of the Congo (DRC), where “actors on all sides appear more and more willing to resort to violence to achieve their ends,” the top United Nations official in the country called today on the Security Council to urge the parties to return to dialogue, guarantee the right to peaceful opposition and to end impunity for violence.