Following a month that saw civilians continuing to bear the brunt of the conflict in Yemen, a 72-hour halt to fighting set to take effect later today is welcome, but not nearly enough time, according to a senior United Nations relief official, who appealed for more predictable access to be able deliver aid to hard-to-reach communities caught up in the crisis.

“By having just access for 72 hours you interrupt your planning by diverting attention somewhere else. But if we can have those areas open at all times and we can plan differently and we can supply better,” said the UN Humanitarian Coordinator in Yemen, Jamie McGoldrick, speaking to UN Radio by phone from the Yemeni capital, Sana’a.

This past Monday, the UN Special Envoy for Yemen, Ismail Ould Cheikh Ahmed, announced a plan for the resumption of a comprehensive cessation of hostilities in the war-torn Gulf nation. According to his Office, the Special Envoy has received assurances from all Yemeni parties of their recommitment to the Terms and Conditions of the Cessation of Hostilities of 10 April 2016, which will re-enter into force at midnight tonight Yemen time, for an initial period of 72 hours, “subject to renewal.”

Yemen is one of the poorest countries on earth and the 18-month-old conflict has had a terrible effect on its people, according to the UN Office for the Coordination of Humanitarian Affairs (OCHA), which estimates that nearly half the population – or just over 12 million people – are now in need of some form of assistance. The UN-facilitated peace talks between a Yemeni Government delegation and a delegation of the General People's Congress and Ansar Allah ended on 6 August.

The pause in the fighting cannot come soon enough for the people of the country and Mr. McGoldrick stressed today that one of the key priorities will be to getting aid to people in the city of Taiz, which has been hard-hit amid clashes between Government forces and Houthi rebels.

Some 600,000 people have been displaced by the fighting in the central Yemeni city, the UN says, in a plea for funding from the international community. Other places that need urgent help include Marad and the capital Sana’a, where airstrikes were reported on Wednesday. Getting that aid into Yemen continues to be a huge challenge, with one of the country’s main ports, Hodeidah, still crippled from airstrikes that damaged its huge cranes that used to offload ships.

“What that means is that many ships spend a lot of time trying to offload […] and we’ve seen reports of goods being kept on the open sea for too long and by the time they get to shore the foodstuffs have actually been spoiled,” explained Mr. McGoldrick.

The lack of food coming into Yemen is insufficient to satisfy the needs of the population, and this has led to widespread malnutrition.

To help counter this, the UN has called for $1.63 billion from the international community. To date, this appeal is less than 47 per cent funded.

In addition to the violence, Yemen now faces the threat of cholera, with the country’s Health Ministry on 6 October, having confirmed 15 cases – 11 cases in Sana’a and four cases in Al Bayda, according to OCHA. 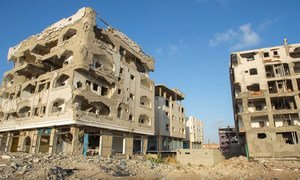 The United Nations Special Envoy for Yemen, Ismail Ould Cheikh Ahmed, announced today a plan for the resumption of a comprehensive cessation of hostilities in the war-torn Gulf nation.