With top diplomats and urban development experts gathered this week in Quito, Ecuador, for a major United Nations conference on green, clean urban spaces, the UN Educational, Scientific and Cultural Organization (UNESCO) has released a new report spotlighting the power of culture as a strategic asset for creating cities that are more inclusive, creative and sustainable.

Launched today in the historic Ecuadorian capital, itself a UNESCO World Heritage Site, the agency’s Culture: Urban Future Report makes the case that culture needs to be fully integrated into urban strategies to ensure their sustainability, as well as a better quality of life for residents.

“With over half of the world’s population now living in urban areas, the road to sustainable development passes through cities in every corner of the globe,” Irina Bokova, the Director-General of UNESCO, stated in the report’s executive summary. “Cities bring creative and productive people together, helping them to do what they do best: exchange, create and innovate,” she added.

The ground-breaking report brings together two years of research, showcasing analyses and recommendations to foster the role of culture in sustainable development. Goal 11 of the UN Sustainable Development Goals (SDGs) is to make cities inclusive, safe, resilient, and sustainable.

Thanks to a global survey supported by nine regional partners, scholarly insight, and NGOs and urban experts’ contributions, the report offers a global perspective on urban heritage safeguarding, conservation and management, and the role and promotion of creative and cultural industries as a means to generate sustainable urban development.

As Francesco Bandarin, the Assistant Director-General for Culture at UNESCO, explains in a video released today, culture is not only a trait of human civilization, but a source of empowerment for our future. It has the “power to open minds of women and men, it is a powerful tool for dialogue, mutual understanding, even for peace,” he says.The Culture for Sustainable Development Initiative will continue to orchestrate events such as the one held in Hangzhou, China last December, which brought together international players to share best practices and experiences that will help preserve and redevelop urban spaces.

The initiative will advocate a culture-based approach to urban planning and development additionally through the New Urban Agenda, which will be adopted this week by the Habitat-III conference.

“Culture,” Ms. Bokova explains, “lies at the heart of urban renewal and innovation. Culture embodies the soul of a city, allowing it to progress and build a future of dignity for all,” a philosophy that is the core of UNESCO’s work. “A human-centred city is a culture-centred space.” 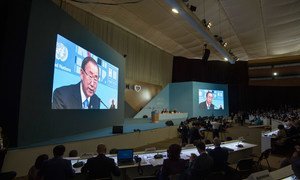