UNICEF/Anmar
Iraqi women and children displaced from the Mosul corridor line up to recieve food in Debaga Displacement Camp in Erbil Governorate.
18 October 2016

United Nations humanitarian agencies operating in Iraq are bracing for what could be a displacement catastrophe requiring the largest and most complex global response in 2016, in the wake of the military offensive under way to oust terrorists from Mosul, the country’s second-largest city.

“Displacement is expected to start any minute now,” Jens Laerke, spokesperson for the UN Office for the Coordination of Humanitarian Affairs (OCHA), told reporters in Geneva.

According to OCHA and other agencies, up to one million people may be forced from their homes due to the military operation against Islamic State of Iraq and the Levant (ISIL/Da’esh), of which 700,000 may be in need of shelter assistance and up to 200,000 may be displaced within the first two weeks of the operation.

UN relief officials described the situation as having the potential to be one of the worst-case scenarios requiring the largest and most complex humanitarian operation in the world in 2016, or a catastrophe resulting in one of the largest man-made displacement crises in recent years.

“Protection concerns for all those civilians are at the forefront of the preparations of the humanitarian community, and there are already protection monitoring teams on the ground,” Mr. Laerke said.

He explained that preparations for the offensive have been going on for several months, and the UN has focused on preparing shelter in three priority areas south of Mosul, where the first displaced families are expected to be accommodated. More reception sites are under construction. Supplies including food, water and sanitation and household kits have been stockpiled in preparation. All this has been done with the collaboration of non-governmental organizations, he added.

There are real fears that the offensive to retake Mosul “could produce a humanitarian catastrophe resulting in one of the largest manmade displacement crisis in the recent years,” according to the UN Refugee Agency (UNHCR) Credit: UN News Centre

“The UN has prepared as efficiently as possible with the available resources. The preparedness appeal is asking for $367 million, but it is not fully funded,” he said.William Spindler, the spokesperson for the Office of the UN High Commissioner for Refugees (UNHCR), said the agency is continuing to prepare shelter and other emergency assistance while appealing for more international funding.

“There are real fears that the offensive to retake Mosul could produce a humanitarian catastrophe resulting in one of the largest man-made displacement crises in recent years,” he said. There are already 3.3 million displaced Iraqis – approximately 10 per cent of the population.Mr. Spindler said UNHCR has already opened five camps, ready to shelter 45,000 people. There are plans for a total of 11 camps to open in the coming weeks, with a capacity for 120,000 people. UNHCR and partners are ready to establish more camps quickly, but have been constrained by a lack of access to safe and suitable land from the Iraqi authorities and private landowners.

With the rainy season and winter approaching, the issue is becoming even more pressing. In addition, UNHCR will have 50,000 emergency shelter kits available for out of camp populations, covering a total of 300,000 people. There will also be 25,000 tents available for families living outside of camps, covering a further 150,000 people, he added.

If all planned activities are funded and ready, UNHCR will be able to provide shelter support for 570,000 people. So far, $75 million, or 39 per cent, out of UNHCR’s response budget of $196.2 million, had been provided.

“The enormity of the potential displacement raises also considerable concerns about the protection of civilian populations,” he said. “For example, some could be prevented from fleeing or could face restrictions of movement to safe areas and access to humanitarian assistance, he added.

Moreover, there are also risks of vulnerable populations facing exploitation and abuse, including possible heightened intercommunal and ethnic or religious tensions and conflicts, and family separations and detentions for security screening.

Civilians risk being caught in crossfire

Speaking by phone from Bagdad in Iraq, Thomas Lothar Weiss, the Chief of Mission for the International Organization for Migration (IOM) in the country, said the Mosul campaign, which started yesterday, puts civilians at extreme risk from cross fire, snipers, and artillery barrage.

Tens of thousands of people could be trapped between the fighting lines or held as human shields, for which there have been precedents, in areas which have been recaptured from ISIL in the past weeks and months, he said.

“There is also a fear, based on some evidence, that ISIL might be using chemical weapons,” he noted.

“The Mosul situation has the potential to be one of the worst case scenarios and is expected to be the largest and most complex humanitarian operation in the world in 2016,” he said.

Based on plans by the Government, it is envisaged that a number of the internally displaced persons who make it out of Mosul will be resettled in emergency sites in secure locations in different corridors to the east and south-east of Mosul. Those are sites that can be established quicker than the regular camps and will include some basic services. IOM has started the process which led to the identification of four emergency sites, which have a potential capacity of up to 150,000 persons, but still far from the 200,000 people who might be displaced during the first week of the military operation.

UNICEF warns of ‘extreme risk’ for children and families

Christophe Boulierac, spokesperson for the UN Children’s Fund (UNICEF), said that more than half a million children and their families in Mosul would be at extreme risk in the coming weeks.

“Many children and their families could be forcibly displaced and trapped between fighting lines or caught in the cross-fire,” he said, adding that UNICEF’s major concerns relate to the protection of children during the military operation, the scale and pace of displacement and its impact on the agency’s ability to deliver, and the protection of children and their access to services in the aftermath of the conflict.

UNICEF has already prepositioned enough water, showers, latrines and hygiene kits for over 150,000 people immediately, with plans to reach over 350,000 over the next few weeks. Mobile teams are on standby to care for the most critical cases of mental and physical trauma among children. Together with the Ministry of Health, UNICEF also has more than 50 teams on standby to start a vaccination campaign against polio and measles.

Mr. Boulierac stressed that UNICEF has called on all sides involved in the conflict to protect children and respect international humanitarian law so that children and their families can safely get through this intense period of violence. For Mosul specifically, UNICEF is asking for $43 million and has received $30 million so far.

Bettina Luescher, spokesperson for the World Food Programme (WFP), said that the agency has been scaling up its preparations. WFP has over 14,000 tons of family food rations in warehouses near Mosul, enough for a million people for one month, or around 200,000 families.She said WFP also has immediate response rations for 240,000 people. Those can be used immediately by people who do not have cooking facilities. Once the families go into shelters with cooking facilities, they would get the monthly rations, she added.

Over the past months, WFP has already been helping over 90,000 people fleeing from places liberated from ISIL along the Mosul corridor. “There is no good information about what is happening inside Mosul and WFP is very concerned about it,” she said. “Also, despite the preparations that have been underway for months, WFP is worried that the circumstances on the ground can make humanitarian access difficult.” 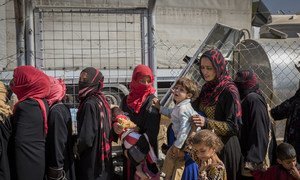 As a large-scale military offensive gets under way to retake the Iraqi city of Mosul from Islamic State of Iraq and the Levant (ISIL/Da'esh) fighters, senior United Nations officials today are stressing the need to ensure that civilians in the city are protected and able to access to humanitarian assistance.