As the world marks the International Day for the Eradication of Poverty, one man who has spent many years working to end poverty among the world’s poorest populations is calling for action now, by investing more in the rural poor.

As the world marks the International Day for the Eradication of Poverty, one man who has spent many years working to end poverty among the world’s poorest populations is calling for action now, by investing more in the rural poor.

Kanayo Nwanze, President of the International Fund for Agricultural Development (IFAD),  is no stranger to the development agenda.

Since 2010, he has been a member of the World Economic Forum's Global Agenda Council on Food Security. Prior to that he was Director-General of the Consultative Group on International Agricultural Research (CGIAR) Africa Rice Center for a decade, where he was instrumental in introducing and promoting New Rice for Africa, or NERICA, a high-yield, drought- and pest-resistant variety developed specifically for the African landscape.

UN News Centre: Why, and what did you do that warranted this recognition, especially as you approach the end of your tenure?

Meetings don’t feed people… we should put our money where our mouth is.

Kanayo Nwanze: I believe I was selected because of my passionate advocacy for smallholder agriculture, particularly for the farmers in Africa – and my call on African, political leaders to invest in agriculture and rural development. This has been important to me throughout my career, particularly since I became president for the International Fund for Agricultural Development.

As my career draws to a close, this prize not only recognizes my passionate efforts, I think it’s a recognition of the importance and the role of small producers, particularly women, which is why I dedicated it to the African smallholder producers who toil silently day and night to feed their families.

UN News Centre: It is stated that you received the Africa Food Prize partly because of your courage in reminding African leaders to go beyond promising change to delivering it. Easier said than done, perhaps; how can they deliver change for the rural smallholder farmers?

I think the problem is that we need to look at whether we have visionary, committed leadership, first and foremost, and whether they understand the implications that you cannot talk about national development if you neglect the rural space. Look at the statistics. There also needs to be institutions capable of implementation. We have to have the rule of law and transparent governance. Some African countries have been able to institute policies that are consistent with their own development agenda. Agriculture plays a very major part – as I said in my call to African leaders, just before the Malabo African Union: What is the legacy that we are going to leave for our children? If Africa is the only region in the world where the numbers of the poor and hungry have increased since 1990 – while other countries, other regions have advanced – there is something wrong. I think we need people to advocate, to really speak out, to call for action, walk the walk and to go beyond conferences, and meetings and declarations. Declarations don’t feed people. Meetingsdon’t feed people. Commitments don’t feed people. What feeds people is action on the ground, and we should put our money where our mouth is.

Kanayo Nwanze: Speaking on the first two Sustainable Development Goals (SDGs) – to eradicate poverty and end hunger, respectively, by 2030 – we need to ask ourselves where do these run deepest in the world? The answer is: in developing countries. Eighty per cent of the poor and hungry live in developing countries of Africa, Asia and Latin America; three-quarters of them in rural areas where small holder agriculture is their major source of livelihood. They produce 80 per cent of the food that is consumed in the developing world. So, to eradicate poverty and hunger, where do you go to fight the enemy? So they have to be central, as the rural environment is central to them; invest in them, in what they do. Otherwise, talk of zero hunger is just talk. If we are really serious about eradicating poverty and ending hunger, we have to ensure that the rural space is transformed and that smallholder agriculture is no longer just a subsistence activity for poor people, but a major component of the transformation of our food systems. 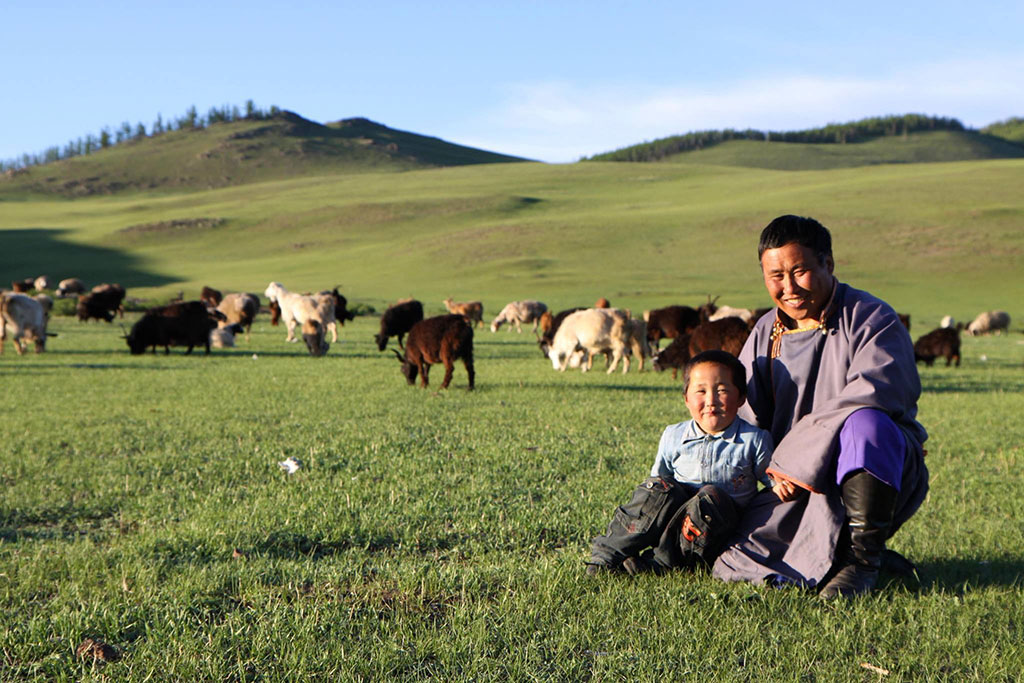 Altanshagai, with his son and herd in Mongolia. Altanshagai is the head of a herders group in Motont Soum that collectively cultivates 20 hectares of hay, protecting and preserving a nearby forest. They also collect pine nuts and wild berries to increase their incomes. IFAD/Susan Beccio

UN News Centre: And your organization, IFAD, has been doing this for years, almost 40 years now; is it possible to quantify the impact this kind of investment has had over those years?

Kanayo Nwanze: It’s interesting that you ask me this question. My background is in agriculture research and I believe in data and evidence. When I joined IFAD, while the institution was invested heavily in this particular area of work, the results were not quantified. We measured success in terms of the number of projects and the money we provided, but not on the impact or outputs.

About three years ago, we engaged in very robust impact studies. Last year, we were able to begin to generate results, and we found that in the last 10-year period, projects that are currently financed and will run until 2023, we would be reaching close to 139 million individuals – poor people – and close to about 50 million families. We also discovered that the impact of our investment, in terms of raising people from poverty, would not be properly measured using the single factor poverty line of $1.25 or $1.90 per day, because the majority of the population that we work with and invest in are extremely poor. They earn less than 50 cents (of a dollar). When you help them in five to 10 years to move to $1.50 and your poverty line is $1.90, they are not captured.

So how do you measure that? You measure the accumulation of assets, like livestock, housing, education, reduction of stunting, etc. This methodology is repercussive. We used top institutions in this particular area to develop a methodology that has become a global public good that can be used by other institutions. My institution is the very first institution to develop this robust, extensive process of impact assessment. So, using this methodology, we can tell a co-investor what can be expected for every dollar invested in a particular country. You not only transform peoples’ lives and livelihoods in terms of increased income, but also in terms of asset accumulation that helps build resilience.

UN News Centre: You just said that Africa is the only region where poverty has increased. You are approaching the end of your second and final term as head of IFAD. What would you say has changed in rural development during your presidency, or perhaps, some of the highlights that you’ve witnessed?

“Change must begin from within. Africa must take responsibility for its own transformation.”

Kanayo Nwanze: There have been major landmarks. Let me first of all say that during the 2009 Italian presidency of the G8 [Group of 8 governmental political forum], it was the first time that agriculture was recognized as central to the development of developing countries –along with smallhold agriculture and women. "Then during the French presidency of the G20 in 2011, the first agricultural ministers' meeting again elevated smallholder agriculture and dedicated three paragraphs in his final declaration to smallholder agriculture and to women empowerment. The Chinese presidency for the G20 this past June held the second agricultural ministers’ meeting in Xi'an [China] where the role of smallholder agriculture and the empowerment of women and youth were recognized, and, for the first time, they agreed that to hold these meetings every year. So when you see the trajectory over the last almost eight to 10 years, rural development and smallholder agriculture have been on the agenda. While I feel satisfaction that our advocacy is beginning to be recognized, we need to take that agenda further and call upon the leaders of these countries because change cannot come from outside. Change comes from inside.Change must begin from within. Africa must take responsibility for its own transformation. Africa is responsible for its own future. It will not develop through foreign assistance. Our leaders must learn that only in investing in its own development will they achieve sustainable change. 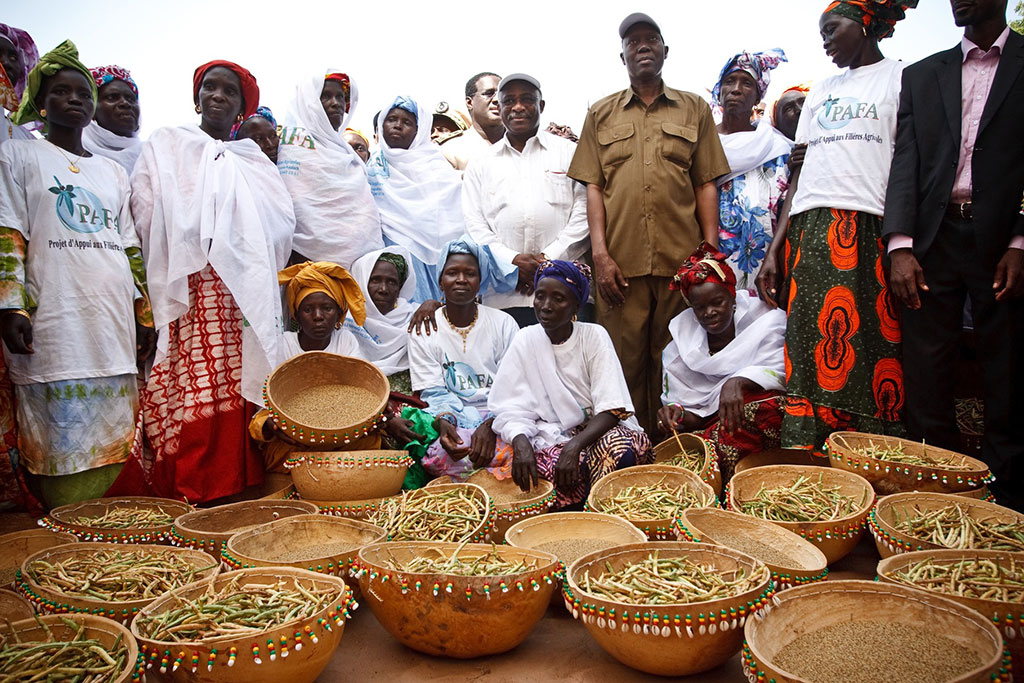 IFAD President Kanayo F. Nwanze poses with Senegal Minister of Agriculture Khadim Gueye and women from a farmer's cooperative during a ceremony held on the occasion of his visit in the village of Keur Baka, Senegal. FAD/Olivier Asselin

UN News Centre: From your assessment will the 2030 agenda be achieved for the rural populations of Africa, especially the rural farmers?

Kanayo Nwanze: IFAD will continue to advocate and to increase its investment portfolio, which targets only rural populations; rural transformation, and as we move forward, increasingly we have other development partners that are seeing change. Change is gradual. I hope that this trend continues. And in spite of the serious economic crisis my institution has experienced – for example, the last replenishment period, which was consultations in 2014 – an increasing number of member States are contributing to our resources. Currently we stand at 100 members, the only financial institution where you have such a large number – two-thirds of its membership – contributing to its resources and at a high level of total contribution commitments. That is a sign. Additionally, in spite of all what I said, more countries, national government are co-investing in programmes that IFAD supports because they believe we are an honest broker and know we will deliver. IFAD is trusted by political leaders and the private sector and we are friends of produces. So we are actually at the crossroads of making it happen, and I believe if this momentum were to continue, we would suddenly see more people in rural areas of the developing world move out of poverty.

UN News Centre: So much hope and promise there, what about challenges? What challenges lie ahead, especially with regards to the SDGs?

Kanayo Nwanze: Climate change is a big challenge because it will not get better, so it must be considered in all conversations. Climate change is a key issue. Secondly, financing – this has to continue being directed towards agriculture and rural development, through partnership; true partnerships where the producers themselves are also partners in the deal; where it is no longer public-private partnership. It has to be a public-private partnership where producers are central and well organized.

We have to stimulate organization and aggregation of resources of the small producers, and, of course, the political landscape. We need to have stability in Africa, you cannot invest without it. These are going to be major challenges but judging from the spirit of Agenda 2030 for Sustainable Development Goals we saw last year, first with the Third International Conference on Financing for Development in Addis Ababa; the adoption in September of the SDGs; and then in Paris, the COP 21 – there is hope and global commitment. That is why I remain very optimistic. I am an optimist because I believe more people are becoming sensitized as to how serious this matter is and if we don’t act now, then we do not have the future in our hands.