Concluding a three-day mission to Myanmar today, the top United Nations aid official called on all sides to find peaceful ways to resolve their differences and urged strengthened humanitarian action to support the people affected by violence in the Southeast Asian country.

“Humanitarian need is our only measure and impartial aid our only goal,” said the UN Under-Secretary-General for Humanitarian Affairs, Stephen O’Brien, in a news release issued by his Office (OCHA) from Yangon.

His trip took place shortly after the outbreak of violence in the northern part of Rakhine state and at a time of escalating armed clashes in Kachin.

Expressing deep concern regarding recent developments, he called for all sides to find peaceful ways to resolve differences rather than choosing the path of violence. He also called on all parties to uphold their responsibilities to protect people affected by violence and conflict and to ensure humanitarian access to people in need.

In meetings with State Counsellor Daw Aung San Suu Kyi and other Government officials, Mr. O’Brien, who is also the UN Emergency Relief Coordinator, welcomed Myanmar’s recent transition to democracy and the progress that has been made by the Government, local communities, and national organizations in preparing for and responding to natural disasters.

Visiting Kachin and Shan states, where almost 100,000 people remain displaced and are unable to return home because of continued fighting and the deadly threat posed by landmines, Mr. O’Brien said “it was very important for me to visit people on both sides of the conflict line, to see first-hand the impact of the conflict on vulnerable communities.” “I spoke with people who fled violence more than five years ago and who are simply waiting for the guns to go silent before they can go home,” he added.

Mr. O’Brien also travelled to Sittwe in Rakhine state where around 120,000 people, most of whom are Muslims who call themselves Rohingya, are still living in displacement camps, four years after the outbreak of inter-communal violence in 2012, according to OCHA.

He saw the level of poverty that the people of Rakhine endure and witnessed the dire living conditions and hardships endured by Muslim communities who are still denied freedom of movement. He also met with some distressed Rakhine women who had only just arrived in Sittwe after fleeing the recent violence in northern Rakhine.

“The recent violence in Rakhine state is deeply troubling and the immediate priority must be to prevent further violence and to ensure the protection of all civilians,” Mr. O’Brien said.

“All people in Rakhine state, irrespective of their ethnicity, religion or citizenship status, must have safe access to their nearest hospital or medical centre, to regular schools and to livelihoods,” he added.

The Myanmar Humanitarian Response Plan for 2016 is 55 per cent funded at $104 million, leaving a gap of $86 million. More funding is urgently required to scale-up the humanitarian response across the country, particularly in education and health, according to OCHA. 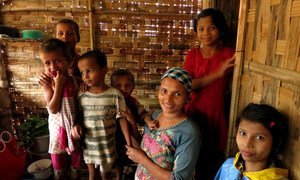 The United Nations envoy for Myanmar today expressed his deep concern at the violent attacks by unidentified individuals and groups against border guards and security forces on 9 October and the resultant fighting that claimed the lives of security personnel and civilians in the three affected areas of Northern Rakhine.