OCHA/Emmanuelle Schneider
Many people – women and children mainly – prepare to flee Kaga-Bandoro, Central African Republic, towards Chad. The men stay behind to take care of their livestock or businesses.
14 October 2016

In the wake of a number of killings and attacks on civilians in the Central African Republic (CAR), the Office of the United Nations High Commissioner for Human Rights (OHCHR) has called on all actors in the country to exercise restraint and prevent any further escalation in violence.

“The worst incident took place on Wednesday [12 October], when several hundred ex-Séléka members attacked the Evêché camp for internally displaced people as well as the Prefect’s office and the MINUSCA [the UN mission in CAR] camp,” said Ravina Shamdasani, a spokesperson for OHCHR at a regular news briefing at the UN Office at Geneva (UNOG).

“In addition to 18 civilians and 12 ex-Séléka members who were killed, many more were injured, houses and offices were torched and looted and internally displaced people forced to flee,” she added detailing the attack.

According to OHCHR, violence has escalated in Kaga Bandoro over the past month and premises of non-governmental organizations as well as private homes of humanitarian workers have been attacked.

Further at the briefing today, Ms. Shamdasani underlined the need for individual, judicial accountability for those responsible for the violence and called on all armed groups to participate fully in the disarmament, demobilization, reintegration and rehabilitation process, terming it a “crucial step” towards lasting peace in the country.

She also called on the Government of CAR to ensure an inclusive political space where the concerns of all communities are given due regard and long-standing grievances are not left to fester.

Also today, the UN Children’s Fund (UNICEF) said in a news release that it received reports that three educators and two education officials were among those killed on 12 October when armed men attacked a school where a teachers training, that was part of a UNICEF programme to strengthen the education system in the region, was underway.

The director of the Regional Pedagogical Centre and the Vice President of the Association of Parents were also killed in the violence.

UNICEF further noted that throughout the African country, several thousand children are deprived of education because their schools have been looted or are controlled by armed groups. In the city of Kaga Bandoro itself, the start of the school year (originally scheduled for 19 September) has been delayed due to the volatile security situation.

“Schools and educational facilities should never be targets by any armed groups,” said Mr. Fall. “All children have the right to learn in the safety of their schools and of course teachers need that same security to be effective educators and mentor.”

Further in the release, UNICEF stressed that attacks against schools are a serious violation of international humanitarian law and called on all parties to honour their obligations and cease attacks on educational institutions.

More than three years of civil war and sectarian violence have displaced thousands of people in the CAR amid continuing clashes between the mainly Muslim Séléka rebel coalition and anti-Balaka militia, which are mostly Christian. 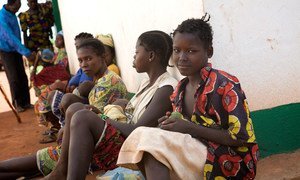 The United Nations Office for the Coordination of Humanitarian Affairs (OCHA) has condemned ‘in the strongest terms’ recent attacks involving humanitarian workers in the northern town of Kaga Bandoro located in the Nana Gribizi prefecture of the Central African Republic (CAR).