UN Photo/Rick Bajornas
Wide view of the Security Council during its meeting on the threat posed by Islamic State of Iraq and the Levant (ISIL, Da'esh) to international peace and security and on the efforts of the UN in support of its Member States to counter the threat.
13 October 2016

“Increasingly complex and nearly simultaneous attacks in different countries – committed through large-scale operations and individual or small terrorist cells, either directed or inspired by ISIL – have a significant impact and present particular problems to UN Member States in terms of the security response,” UN Under-Secretary-General for Political Affairs Jeffrey Feltman told Council members.

“ISIL [also] continues to assert itself in cyberspace, using closed fora, encrypted messaging systems, and communications through the ‘dark net’ to recruit and distribute its propaganda,” he added.

Mr. Feltman’s briefing was based on the report of UN Secretary-General Ban Ki-moon on the threat posed by ISIL to international peace and security and on the efforts of the UN in support of its Member States to counter that threat.

Detailing the impact of ISIL in various parts of the globe, Mr. Feltman informed the 15-member body on the group’s activities in south-east Asia, East Africa and Yemen and noted a renewed energy on part of the group’s pre-existing terrorist networks as well as increased motivation of individuals to travel to conflict zones as foreign terrorist fighters.

He further informed the Council that a growing number of UN Member States have addressed the potential threat posed by such foreign fighters who return to their home countries through a range of criminal justice, administrative and rehabilitation and reintegration measures as well as having taken a preventive approach, including by charging individuals with inchoate and preparatory offences.He added however that countries continue to face challenges in this context, including generating and converting intelligence information into admissible evidence.

Mr. Feltman, who heads up the UN Department of Political Affairs also appraised Council members of the efforts of various UN entities to support countries counter the threat of ISIL, including through development of the capacity-building implementation plan for countering the flow of foreign terrorist fighters, as well as promoting best practices on the protection and promotion of human rights to prevent violent extremism.

He further added that at the field UN bodies, such as its missions, prepared assessment reports on ISIL and shared these with the Member States.

Concluding his briefing, the UN political official echoed the importance of the Secretary-General’s call for a comprehensive and purposeful international cooperation to effectively prevent violent extremism and counter-terrorism.

“Despite the international community’s efforts, international counter-terrorism cooperation is still not up to the level of the danger posed,” he said, adding: “If we aim to anticipate new terrorist threats and dynamically address the evolving nature of ISIL, military, security and law enforcement measures need to be complemented with preventive actions that address the drivers of violent extremism conducive to terrorism.” 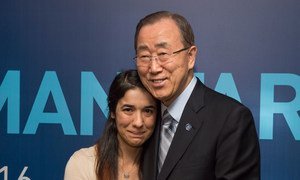