UN/MINUSTAH/Logan Abassi
Brazilian peacekeepers and a police officer from the United Nations Mission in Haiti (MINUSTAH) head out on patrol to the town of Jeremie, which was heavily damaged by Hurricane Matthew.
13 October 2016

Accepting Secretary-General Ban Ki-moon’s recommendation, the Security Council today extended the mandate of the United Nations peacekeeping mission in Haiti for six months at the current force and police strength.

Through the adoption of a resolution, the 15-member Council decided that the UN Stabilization Mission in Haiti (MINUSTAH) – consisting of up to 2,370 troops and up to 2,601 police component personnel – will stay in the Caribbean nation through 15 April 2017.

The mandate renewal comes in the wake of the humanitarian emergency caused by the 4 October landfall of Hurricane Matthew, which also forced the postponement of the 9 October elections.

In the text adopted today, the Secretary-General is requested to conduct a strategic assessment mission of the situation in Haiti “by the end of the current mandate and preferably after the inauguration of a newly elected president” and to present recommendations on the UN’s future presence and role in Haiti in his next report to the Security Council.

In that regard, the Council affirmed its intention to consider the possible withdrawal of MINUSTAH and transition to a future UN presence “beginning no sooner than 15 April 2017,” based on its review of Haiti’s overall capacity to ensure security and stability and on the security conditions on the ground.

Also in the resolution, the Council strongly urged Haiti’s political actors “to work cooperatively in the interests of the Haitian people, joining forces in prioritizing the country’s return to full constitutional normality by completing the electoral process, under way, and without further delays” and ensuring “the holding […] of free, fair, inclusive, and transparent presidential election and partial re-runs of the legislative elections, together with first-round elections for one-third of the Senate seats whose current incumbents will end their term in office in January 2017.” 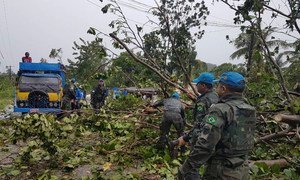 With Haiti facing the dual challenges of addressing the impact of Hurricane Matthew and restarting preparations for the holding of the much-anticipated elections, the United Nations envoy for the Caribbean country today expressed support for the recommended extension of the UN mission there by six months until mid-April 2017.