UNICEF/Kate Holt
A woman cooks a meal outside in the open air with her three children where she is camping with her family the night before being able to register for a ration card in Thanyang, South Sudan.
12 October 2016

The United Nations Mission in South Sudan (UNMISS) said today that it is “extremely concerned” over increased reports of violence and armed conflict in various parts of the country in the last few weeks, including heavy artillery and gunfire exchanges between Government and opposition forces in Leer town.

“The Mission condemns in no uncertain terms these acts of violence and attacks against non-combatant civilians, and reiterates its urgent call for an immediate and complete cessation of hostilities, and more particularly, an end to any form of violence perpetrated against unarmed civilians,” UNMISS' principle public information officer said in a statement, which also reminded all parties that such attacks may constitute serious human rights violations, including crimes against humanity and war crimes.

The Mission further called on all parties to immediately end the fighting throughout South Sudan, and demanded that they ensure that their commanders control their forces and protect civilians and their property, cease all hostilities, and work together for the good of the people of this country.

In early July, close to the fifth anniversary of the country's independence, the youngest nation was plunged into fresh violence due to clashes between rival forces – the Sudan People's Liberation Army (SPLA), loyal to President Kiir, and the SPLA in Opposition, backing former First Vice-President Riek Machar.

UNMISS force in Leer has reported heavy artillery and gunfire exchanges between the two sides leading to several reported deaths and the continued displacement of the civilian population in the area into the bush and swamps.

Over 9,000 displaced people seeking a safe place to stay have moved into the church compound in Wau, South Sudan. Photo: UNICEF/UN027524/Ohanesian

According to the Mission, it has also received continued reports of clashes in the Equatorias, and is verifying accounts of attacks by unidentified armed men on a civilian convoy travelling from Yei to Juba, which led to the deaths of over 20 people, including women and children, and retaliatory actions by responding military personnel, which led to the deaths of a further five civilians. “The Mission is yet to be granted access to these areas to place us in a position to independently verify the reports on the ground,” the officer said.

UNMISS is in direct communication with several government agencies, including the SPLA, in order to have these restrictions to its movement lifted, as yet without success.

UNMISS condemned in the strongest possible terms, any calls for a return to the violence that has plagued this country, urging all parties to cease the rhetoric of incitement, which is not the answer to South Sudan's problems.

“We encourage all parties to put the people of South Sudan first, and work to bring an end to suffering of the people of this country,” the officer said.

♦ Receive daily updates directly in your inbox - Subscribe here to a topic.
♦ Download the UN News app for your iOS or Android devices.
violence 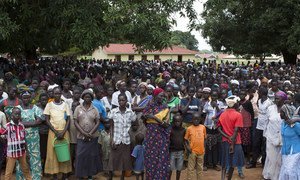 Extremely concerned by the continuing deterioration of the security situation in the South Sudanese town of Yei, where an estimated 100,000 people are trapped, the United Nations mission in the African country today called on warring factions to immediately end all hostilities.